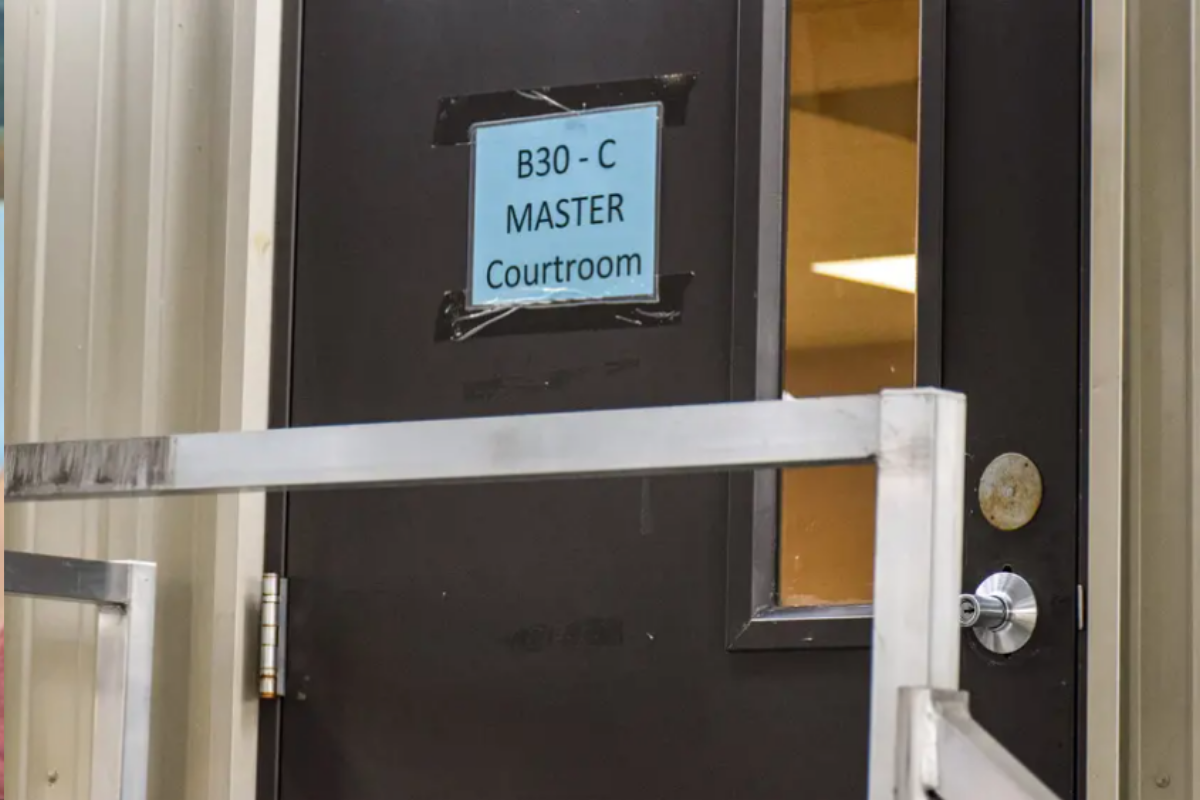 An immigration courtroom at a tent facility that was erected in Laredo to handle a surge in cases on the border. (Photo by Ulysses S. Romero for The Texas Tribune)

Hundreds of the country’s immigration judges filed a lawsuit Wednesday alleging that the Trump administration is muzzling their right to free speech.

The lawsuit cites a 2020 policy enacted by the Justice Department’s Executive Office of Immigration Review that prohibits judges from speaking about policy or law, even in their personal capacities, and requires immigration judges to obtain prior permission before speaking on any other policy, according to the lawsuit, which was filed in a Virginia federal court by Knight First Amendment Institute at Columbia University on behalf of the National Association of Immigration Judges, a nationwide organization of more than 460 judges.

The policy violates the First and Fifth Amendments to the U.S. Constitution, the judges argue, and the U.S. Supreme Court has previously held that “people do not surrender their free-speech rights when they accept government employment.”

The government can only prohibit speech if it can show that doing so outweighs an employee’s interest and the public’s interest in hearing what that person has to say.

“The government cannot satisfy this test here,” the filing argues.

“Part of the job of an immigration judge is to educate the public about the immigration courts and the role they play in society,” Judge A. Ashley Tabaddor, president of the National Association of Immigration Judges, said in a statement. “This policy prevents us from doing this critical work, undermining public understanding of and trust in the immigration courts in the process.”

The lawsuit, which names EOIR Director James R. McHenry as the defendant, says the policy was enacted at a time of “intense scrutiny” of the country’s immigration court system after Trump enacted several policies that affect the courts, including quotas for judges, limiting judges’ abilities to close cases and reassigning judges to other jurisdictions to help handle the increasing docket of asylum hearings.

“There is significant public interest in these changes and in their effects on the independence of immigration judges and the process afforded migrants who appear before them,” the lawsuit states. “Immigration judges are uniquely positioned to inform the public on these issues.”

The judges are also blocked from speaking publicly about the impact that the COVID-19 pandemic has had on the immigration system and on detained migrants. Most of the country’s immigration courts have continued to hear cases involving detained migrants despite calls to temporarily shut the courts down because of the risk of COVID-19 infection.Only a few judges have been able to speak on this issue in their official capacities as union representatives but “hundreds more remain silenced” the lawsuit states.The NAIJ is seeking an immediate halt to the policy while the case is litigated.
Note: you can view the lawsuit document on this website or here: