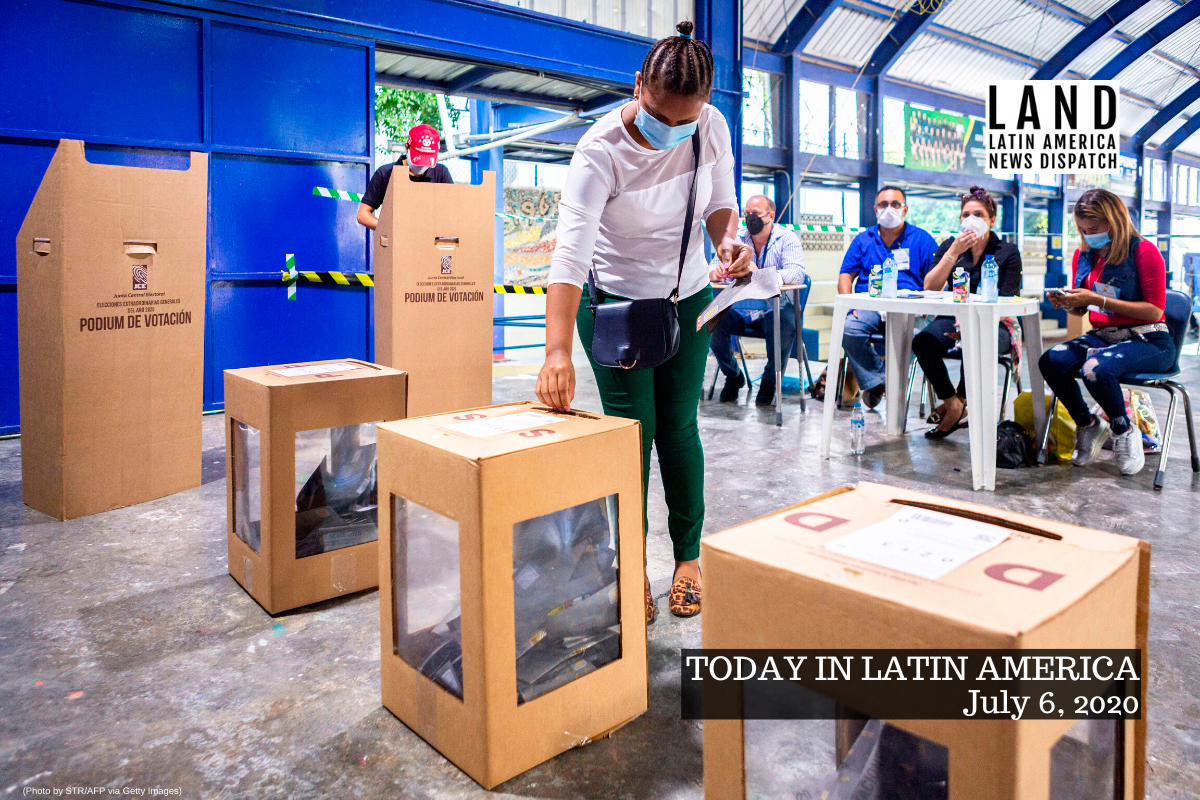 People vote at a polling station during General Elections in Santo Domingo, on July 5, 2020 amid the COVID-19 coronavirus pandemic. (Photo by STR/afp/AFP via Getty Images)

DOMINICAN REPUBLIC: Dominicans voted for a new president yesterday in Latin America’s first presidential election during the pandemic, even as cases continue to rise in the country. Luis Abinader, a businessman who has previously run for president, claimed victory after the initial results came in. Abinader ran against former public works minister Gonzalo Castillo and former President Leonel Fernández. Castillo ran with the Dominican Liberation Party, the same party of current President Danilo Medina. If Abinader wins, it will be the first time in 16 years that the Dominican Liberation Party is not in power.

In April, the country’s electoral board delayed the election, which was supposed to be held in May, due to the coronavirus outbreak. Cases continue to rise, but voters still showed up to the polls, wearing face masks and trying to socially distance in line. On Saturday, the health ministry announced 1,241 new COVID-19 cases, the highest new daily total yet. The Dominican Republic has among the highest number of cases in the Caribbean, with more than 35,000 confirmed cases and 775 deaths.

ARGENTINA: Police arrested four people over the weekend after Fabián Gutiérrez, the former secretary to Néstor Kirchner and Cristina Fernández de Kirchner, was found dead. An autopsy showed signs of torture. A judge ruled out a political motive, saying the suspects instead were motivated by theft and extortion. Gutiérrez worked for the Kirchners for several years between 2003 and 2010. In 2018, he was arrested on cover-up charges during the Cuadernos investigation into alleged bribery during the Kirchner administrations.

BRAZIL: On Friday, President Jair Bolsonaro placed limits on a law requiring Brazilians to wear masks in public. Bolsonaro used his veto power to exempt churches and businesses from the rule. The next day, Bolsonaro and members of his administration, along with U.S. Ambassador Todd Chapman, attended a U.S. Independence Day celebration in Brasília without wearing masks. Almost 1.5 million people have been infected with COVID-19 in Brazil, and health experts say the country has yet to reach its peak.

BOLIVIA: Two ministers in the government of Interim President Jeanine Áñez have tested positive for COVID-19 in less than a week. The government announced the confirmed cases of Health Minister Eidy Roca yesterday and Mining Minister Jorge Fernando Oropeza last Thursday. Minister of the Presidency Yerko Núñez has also tested positive. Coronavirus cases are growing in Bolivia, with 35,500 confirmed cases and 1,200 deaths. The health system in parts of the country is already overrun, and local authorities have responded by digging mass graves.

PERU: President Martín Vizcarra yesterday announced a referendum on ending parliamentary immunity, calling corruption “a virus that has infected the state at all levels.” Vizcarra also called on Congress to vote on a law that would prevent politicians who have been convicted on corruption charges from running for president, vice president, Congress and other elected positions. Voters will be able to respond to the referendum question in the general elections in April 2021. Vizcarra’s presidency has been defined by anti-corruption efforts, which led him to dissolve Congress last year, briefly throwing Peru into a political crisis and raising Vizcarra’s approval ratings.

PUERTO RICO: Gov. Wanda Vázquez Garced fired Secretary of the Department of Justice Dennise Longo Quiñones on Friday. El Nuevo Día reported that earlier that day, Vázquez and Longo argued about investigations Longo wanted to pursue. The investigations allegedly involved officials in Vázquez’s administration and related to the purchasing of COVID-19 tests. Longo said she was surprised when she was asked to resign, and she denies that she argued with Vázquez on Friday. Vázquez has appointed Wandymar Burgos Vargas as interim secretary.

PANAMA: A judge ruled Friday that former President Ernesto Pérez Balladares could freeze the assets of Corporación La Prensa, S.A., which owns the newspaper La Prensa. The seizure stems from a 2012 civil litigation case in which Pérez Balladares sought $5.5 million in damages for what he claims was a smear campaign by La Prensa. The newspaper said the ruling is a blow to freedom of expression and the press in Panama and will impact its ability to meet payroll obligations and pay for operating expenses.

MEXICO: More than 30,000 people have died from COVID-19 in Mexico, which surpassed the death toll in France over the weekend. Mexico now has the fifth-highest death toll from the virus. More than 250,000 people have been infected. Mexico has been slowly reopening, but some measures have been rolled back as cases surge. Mexico City ordered shops in the historic center to close over the weekend just three days after they reopened. The governors of states bordering the United States have asked the government to more tightly monitor those who cross over to Mexico as Texas and other southern U.S. states experience their own surges.

MEXICO: In a scientific paper published Friday, scientists detail their discovery of an ancient ocher mine in a cave on the Yucatán Peninsula. The mine, which is now underwater, is thousands of years old, and experts say it could be one of the oldest on the continent. The study suggests that ancient Americans used fire and tools to mine caves for ocher, a clay pigment that they used for art and burials between 10,000 and 12,000 years ago. Skeletal remains have also been found in the caves, possible evidence that people were going on dangerous expeditions for mining purposes.