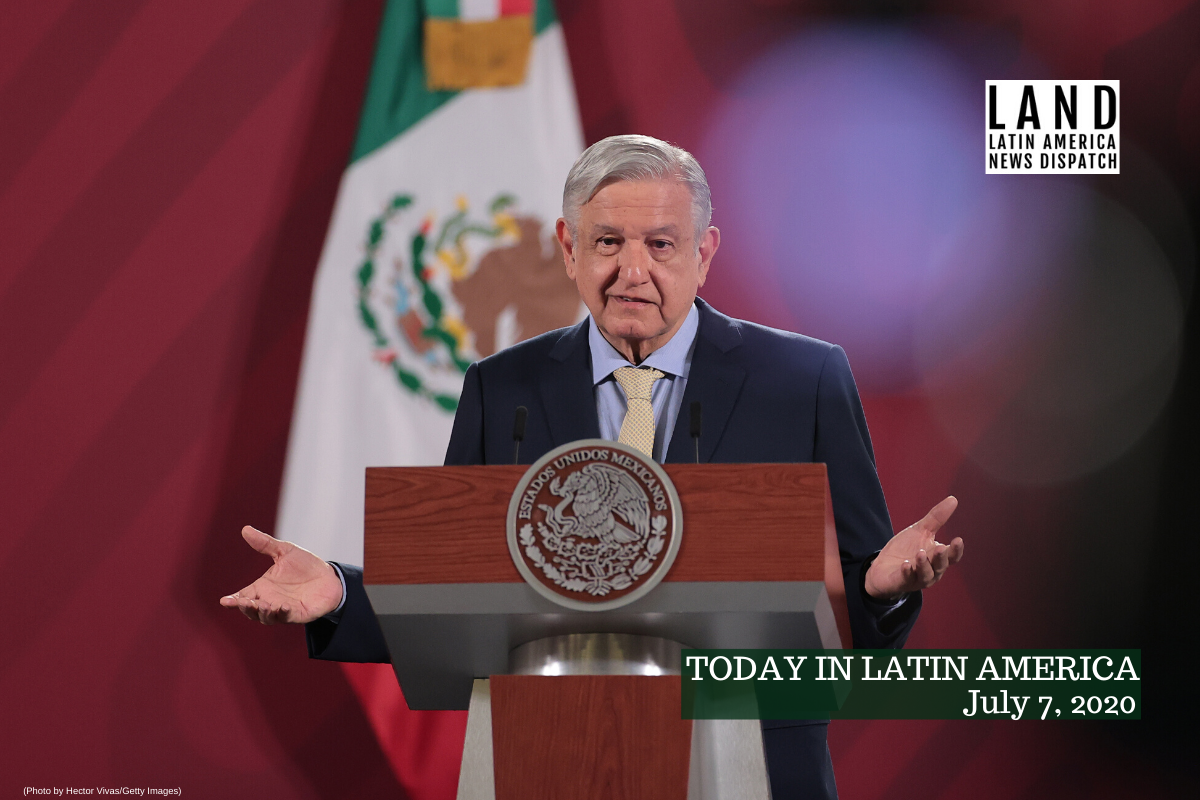 MEXICO-UNITED STATES-CANADA: Mexican President Andrés Manuel López Obrador is expected to travel to the White House tomorrow to celebrate the beginning of the United States-Mexico-Canada Agreement, but Canadian Prime Minister Justin Trudeau will not be there. López Obrador urged the Canadian prime minister to join him and U.S. President Donald Trump, but Trudeau confirmed yesterday that he will not attend.

Last week, Trudeau said that proposed new tariffs on steel and aluminum, as well as the risk of contracting COVID-19, might prevent him from coming. López Obrador spoke to Trudeau on the phone yesterday and Trudeau agreed to go to Mexico as soon as possible, he said.

Tomorrow’s visit to the White House will be López Obrador’s first trip abroad since becoming president. He plans to fly commercial and said he would get tested for COVID-19 before he arrives. Both López Obrador and Trump have traveled in their own countries without wearing masks recently and have downplayed the threat of the virus. Mexican immigrant organizations in the United States have criticized the visit, denouncing Trump’s anti-immigrant policies.

ARGENTINA: On Sunday, President Alberto Fernández said he will present a new offer to creditors in the hopes of settling on a debt restructuring plan. The deadline for negotiations was also extended from July 24 to the end of August. Fernández said the new offer of $65 billion of foreign debt is the “maximum effort” his government can deliver. This is the fourth offer Fernández’s government has made this year. Some analysts say this latest offer is encouraging, but others say it won’t persuade creditors.

BRAZIL: President Jair Bolsonaro said yesterday that he would take another COVID-19 test after some Brazilian news outlets reported that he was experiencing body pain and had canceled his agenda today. Bolsonaro said he tested negative twice in recent months but at first refused to release the official results. In April, Brazil’s Congress demanded Bolsonaro release his test results, saying the country deserves to know the truth. In May, the Supreme Court published the results, which were negative.

COLOMBIA: Seven people died and dozens were injured when a tanker truck exploded near Barranquilla yesterday. The truck, which was loaded with fuel, had crashed and turned on its side. Video taken before the explosion showed people gathered around the truck with buckets to take the fuel. Years of inequality, combined with the severe economic impact of the coronavirus, have led some Colombians to take desperate measures. Senator Armando Benedetti lamented the tragedy, saying, “All this because they were looking for a way to survive.”

ECUADOR: Ecuador reached a deal with bondholders over a provisional debt restructuring plan yesterday. The deal would reduce the country’s debt by $1.5 billion and provide partial debt relief on $10 billion over the next four years, giving the country some time to recover from the economic blow of the coronavirus pandemic. The International Monetary Fund, which hopes to make its own deal with Ecuador within the next month, celebrated yesterday’s deal. Ecuador has been among the hardest hit by the coronavirus in Latin America and the drop in oil prices this year.

DOMINICAN REPUBLIC: As expected, Luis Abinader was declared the winner of the Dominican Republic’s presidential election. As of yesterday, he had won 53% of the votes, defeating Dominican Liberation Party candidate Gonzalo Castillo and former President Leonel Fernández. Abinader’s victory ends the Dominican Liberation Party’s 16-year hold on power. Abinader is a businessman who has never held a political office.

PUERTO RICO: A report from the Centro de Periodismo Investigativo confirmed yesterday that former Secretary of the Department of Justice Dennise Longo Quiñones resigned because she wanted to pursue an investigation into the management of disaster relief supplies. The investigation would have looked into the warehouse in Ponce that was filled in January with unused emergency aid, some expired, as Puerto Ricans suffered from the 6.4-magnitude earthquake three weeks earlier and subsequent aftershocks. Gov. Wanda Vázquez Garced asked Longo Quiñones to resign last Friday.

PANAMA: Police arrested two sons of former Panamanian President Ricardo Martinelli on money laundering charges yesterday in Guatemala. Ricardo Alberto and Luis Enrique Martinelli Linares face extradition to the United States. Their arrests follow last week’s indictment of their father and former President Juan Carlos Varela, both charged with corruption and money laundering. The investigation into the ex-presidents grew out of the probe into the Brazilian construction firm Odebrecht, which has been linked to corruption across Latin America.

MEXICO: Three people were arrested yesterday in connection to the massacre at the drug rehabilitation center in Guanajuato last week that left 27 people dead. State prosecutors said the gunmen were looking for a particular person when they entered the facility. They asked the victims if they knew the person, and when they said no, the gunmen fired on them. The three people arrested are allegedly part of a criminal organization, though prosecutors did not say which one. Authorities have told news outlets that the Santa Rosa de Lima Cartel may have ordered the attack against the Cartel Jalisco Nueva Generación.