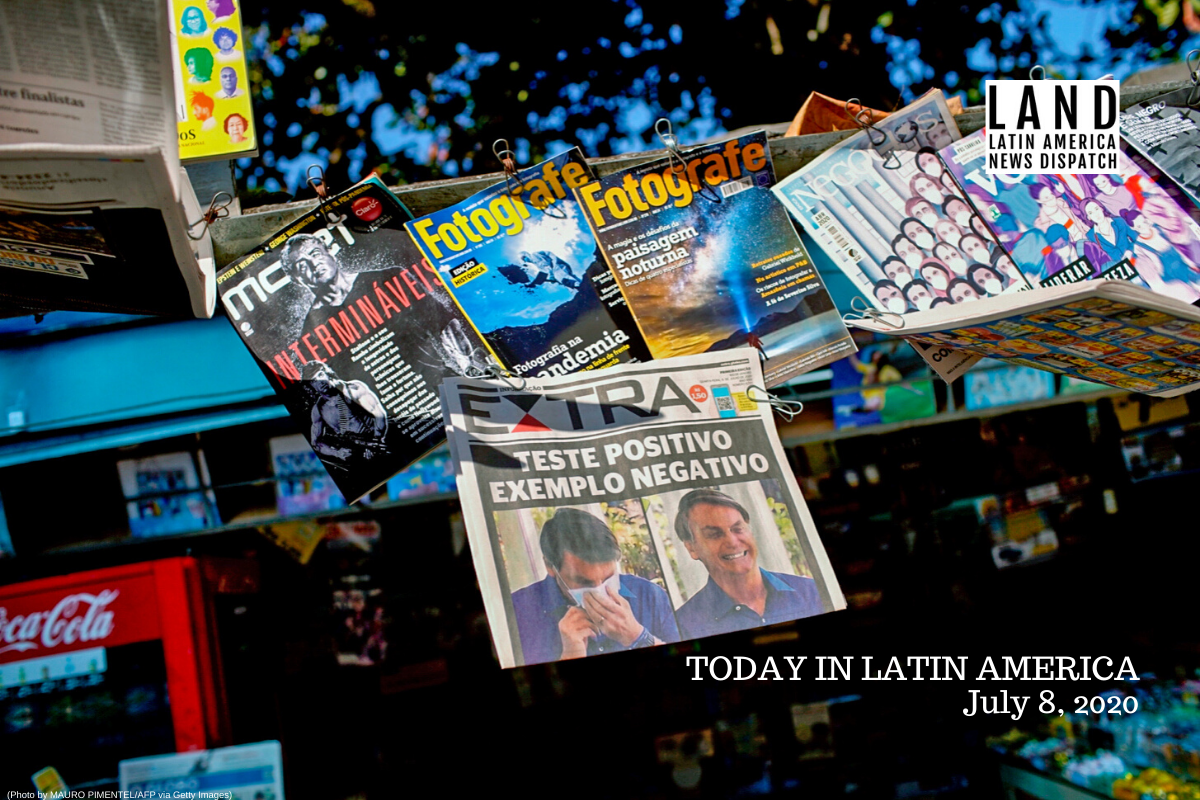 View of the front page of a newspaper with the news of Brazilian President Jair Bolsonaro being a confirmed case of the new coronavirus, at a newsstand in Rio de Janeiro, Brazil on July 08, 2020. (Photo by MAURO PIMENTEL/AFP via Getty Images)

BRAZIL: After months of downplaying the effects of the pandemic, President Jair Bolsonaro has tested positive for the coronavirus. Bolsonaro has made frequent public appearances in Brazil without a mask, and is one of few Latin American leaders who has not imposed a national lockdown to limit the spread of COVID-19. The Brazilian president was tested for the coronavirus in March, but refused to release the results of his test until a court told him to do so.

In a news conference yesterday, Bolsonaro also boasted about using hydroxychloroquine, a drug which has not been proven to be effective against the virus, in order to speed his recovery. Bolsonaro took his mask off during the news conference where he confirmed his positive test results. The Brazilian Press Association announced that it will be suing the president for putting journalists at risk.

The news came on one of the deadliest days of the pandemic in Brazil, with 1,312 deaths reported. The largest country in South America now has the second-highest total of COVID-19 cases in the world at 1,668,500, trailing only the United States. Despite this, some private schools began resuming in-person classes this week. The government has also released contradicting data on coronavirus cases and deaths, leading some experts to believe that the true number of cases may actually be higher.

CHILE: The country has reported over 300,000 COVID-19 cases, the sixth-highest total in the world. 6,434 people have died of COVID-19 in the country. President Sebastian Piñera announced a new government aid package of $1.5 billion to help middle class families and business owners during the pandemic. The package includes zero-interest loans, subsidized rent, and the option to defer mortgage payments for up to six months. Unemployment is also expected to continue rising, and may reach its highest lever in 35 years.

COLOMBIA: After being tested for COVID-19 a fourth time, President Iván Duque announced that Colombia’s quarantine will be extended until August 1. Duque had recently been in contact with a government official who tested positive for the virus. Municipalities with low numbers of COVID-19 cases will be allowed to reopen businesses such as restaurants, theaters, and gyms this month. Protocol regarding the reopening of schools is also forthcoming. Colombia currently has more than 120,000 cases, and 4,000 deaths since March.

ECUADOR: Vice President Otto Sonnenholzner announced his resignation on Tuesday, the third vice president to do so since President Lenín Moreno took office in 2017. Both of Ecuador’s previous vice presidents resigned due to corruption investigations which resulted in prison sentences. Sonnenholzner aided in sending resources to hospitals and delivering food to poor neighborhoods during the pandemic. He said on Tuesday that he decided to take the “difficult” decision now that the public health situation in the country has stabilized. President Moreno must prepare a shortlist of replacements for the position and present them to Congress.

PUERTO RICO: Governor Wanda Vázquez said that she will readily face an investigation into allegations of corruption. The news of the investigation comes after a member of her cabinet was fired for allegedly attempting to “improperly intervene” in another investigation into missing medical supplies in the Department of Health. Vázquez, however, has also been inhibited from participating in the health investigation in the department that her mother ran until March of this year. Reporters revealed yesterday that Vázquez had asked officials not to reveal the results of the investigation before Puerto Rico’s primary in August so as not to affect her chances of winning the election.

COSTA RICA: A chamber of Congress has unanimously agreed to debate a bill against street sexual harassment, making it more possible that the bill will eventually be passed. The bill details punishment for perpetrators who whistle, gasp, or moan with sexual connotations at a person in public without their consent. It also advocates for punishment for those who attempt to pursue or corner someone in public. Penalties for street harassers would also be increased depending on if the victim is younger, disabled, or if the perpetrator is a repeat offender.

GUATEMALA: More than 1,000 people have died of COVID-19 in Guatemala, the highest total of any Central American country. The country has seen more than 24,000 cases since the first positive case was detected in March. Despite having one of the highest populations in the region, Guatemala has had limited testing available, averaging only 1,400 COVID-19 tests per day. The number of new daily infections has continued to rise since last week. Guatemala is currently still under a national lockdown and a strict curfew within major cities. Nearly 1,500 public health officials and public servants have contracted COVID-19.

MEXICO: Authorities confirmed on Tuesday the identification of remains of one of the 43 disappeared students from the Ayotzinapa teachers college. A foot bone was matched to Christian Alfonso Rodríguez Telumbre, who was 19 in September 2014 when the students were attacked and disappeared. The remains were found in the town of Cocula, Guerrero, but not in the garbage dump where the previous administration said the students were killed. This is the first identification of one of the missing students since 2015. The official version of events that the administration of former president Enrique Peña Nieto reiterated has been questioned by activists, families of the victims, and international organizations. The administration of President Andrés Manuel López Obrador renewed the investigation and plans to continue testing more remains found at the scene.

UNITED STATES-BOLIVIA: Seven U.S. senators sent a letter to the U.S. State Department, denouncing interim Bolivian President Jeanine Áñez for “violating civil and human rights” during her presidency and calling for free and fair elections. The senators cited the continuous threats of lawsuits against members of the Bolivian Congress, as well as deaths that have occurred at the hands of violent military interference during protests. The senators, including Bernie Sanders, say that the Áñez government has exceeded its original function of  temporarily keeping order until presidential elections could be properly held, and has instead attempted to hold on to power by persecuting political opponents. Bolivia’s presidential elections are currently planned for September 6.