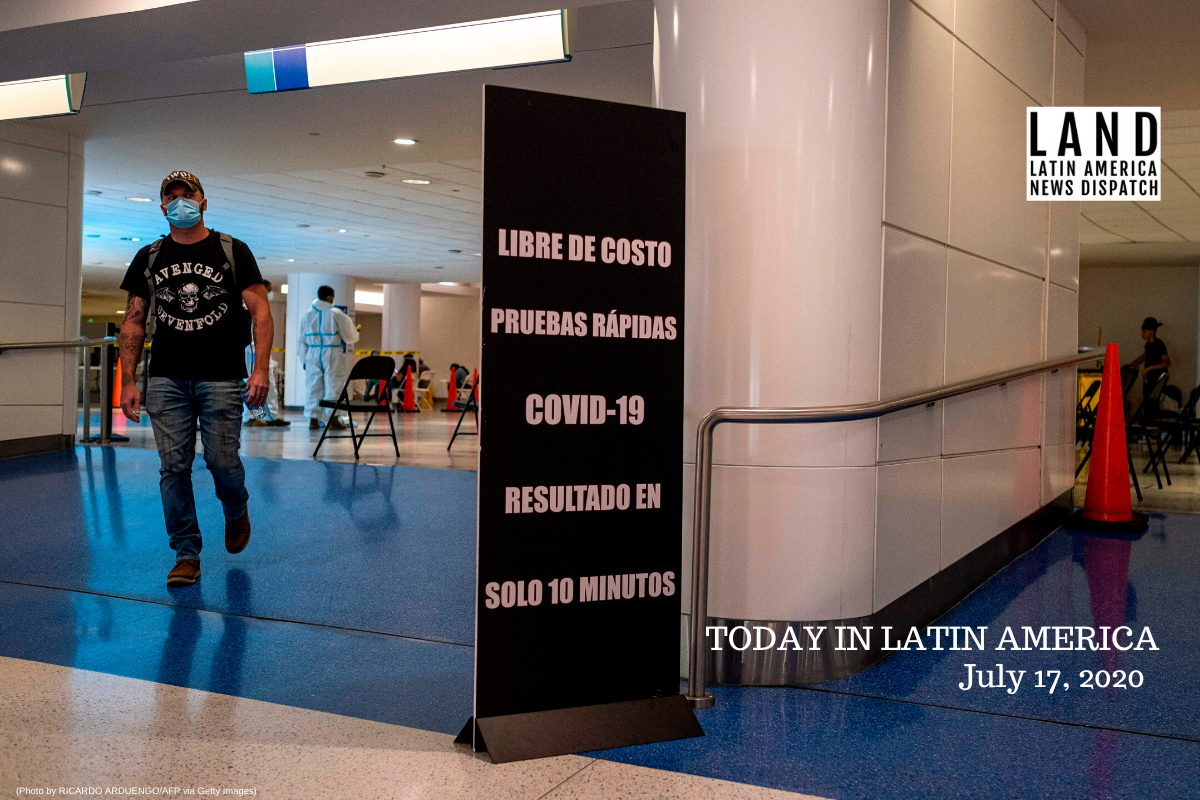 PUERTO RICO: Governor Wanda Vázquez Garced yesterday reversed some reopening measures as coronavirus cases continue to rise on the island. Bars, gyms, theaters, casinos and marinas are among the establishments that will close until July 31. Restaurants can remain open at 50% capacity, and beaches will be open only for people exercising. The curfew from 10 p.m. to 5 a.m. will remain in effect as well, Vázquez said.

On Wednesday, Puerto Rico officially opened its airports to tourists, requiring all visitors to prove they tested negative for COVID-19 within the last 72 hours — or face a two-week quarantine. Videos showed long lines at the airport on Wednesday, and some travelers were unaware of the new requirements. Vázquez said she has asked the federal government to prevent flights from Florida or Texas as cases surge there, but a similar request made earlier in the quarantine was not granted.

Vázquez did not close the island for tourism again, but she indicated yesterday that the reopening might have been premature. Puerto Rico has confirmed more than 3,000 COVID-19 cases since the start of the pandemic and 172 deaths, but experts say the numbers are likely higher.

BRAZIL: The country reached a grim milestone yesterday, surpassing 2 million confirmed COVID-19 cases. On average, more than 1,000 people have died every day since late May. The death toll now stands at 76,000. According to Brazilian news outlets, the coronavirus has reached nearly 100% of Brazilian cities. In some larger cities, like Rio de Janeiro and São Paulo, new daily cases have leveled off or even declined, but overall the numbers are rapidly increasing. Brazil recorded its second million cases in just 27 days. In comparison, it took the United States —which has the highest number of cases in the world— 43 days to reach the same milestone.

COLOMBIA: Police in Colombia arrested six people, including a local official, who were allegedly part of a cartel responsible for the murder of social leaders. They have been charged with conspiracy to commit a crime and drug trafficking. The local official, a councilor in the town of Riosucio, allegedly received 2.5 million pesos a month ($690 USD) in exchange for serving as an “auxiliary” for the Clan del Golfo cartel. The cartel has been linked to the 2019 murder of Indigenous leader and human rights defender Aquileo Mecheche in Riosucio. This year alone, 37 social leaders have been killed in Colombia.

PERU: On Wednesday, President Martín Vizcarra replaced more than half of his cabinet, including Minister of Health Víctor Zamora. It was the second time Vizcarra has replaced the health minister since the coronavirus pandemic began. Peru has among the highest number of cases and deaths in Latin America. The changes to Vizcarra’s cabinet coincided with a 5% drop in his approval rating. This isn’t the first time Vizcarra has sought change on such a scale. El Comercio reports that since he took office in March 2018, Vizcarra has replaced a minister every 17 days on average — for a total of 49 ministers stepping down.

BARBADOS: Authorities launched a new tourism initiative this week called the “Barbados Welcome Stamp.” As the local economy suffers from the slowdown of travel due to the coronavirus pandemic, the island is calling for remote workers to take their jobs to the beach. Under the program, travelers will be allowed to stay for up to one year without a visa and will not have to pay the local income taxes that used to be required after six months in the country. Prime Minister Mia Mottley has also called for a “Caribbean Marshall Plan” and reparations to deal with the economic decline from the pandemic as well as social inequalities stemming from the time of independence.

DOMINICAN REPUBLIC: Protesters clashed with police in the western province of Elías Piña yesterday as they demanded the Central Electoral Board recount the votes for a Senate race in the July 5 national elections. Local media reported an exchange of gunfire and rock-throwing between police and protesters. The Senate race between Yvan Lorenzo Suero of the Dominican Liberation Party and Johnson Encarnación of the Modern Revolutionary Party was decided by a close margin in Elías Piña. Election officials reported that Lorenzo Suero won by only 210 votes.

GUYANA: On Wednesday, the United States imposed travel restrictions on some Guyanese citizens who were allegedly involved in “undermining democracy” in the country after a controversial presidential election. The general election was held March 2. A re-count in June showed that opposition candidate Irfaan Ali had won, but President David Granger has not conceded the race. U.S. Secretary of State Mike Pompeo announced the visa restrictions and urged the Guyanese government to accept the election results. Pompeo’s announcement has also put pressure on the United Kingdom to impose their own sanctions on Guyana, which used to be a British colony.

EL SALVADOR: The trial for former Salvadoran Army colonel Inocente Montano ended on Wednesday, and Montano awaits his sentencing. The Prosecutor’s Office has asked for a sentence of 150 years in prison. Montano was tried over the murder of six Jesuit priests and a woman and her daughter in 1989. The trial took place in Spain as five of the priests were Spaniards. In his last words to the court, Montano denied that he gave orders to kill the priests. The murders caused international outrage and led the United States to end its support for the Salvadoran military regime.

MEXICO: Emilio Lozoya, the former head of Mexico’s state oil company Pemex, was extradited yesterday from Spain to Mexico, where he faces possible charges for money laundering and receiving bribes. Lozoya has allegedly agreed to hand over evidence showing that politicians in Mexico were bribed into supporting an energy reform bill that former President Enrique Peña Nieto backed. Lozoya’s cooperation in the investigation could reveal a wide network of corruption and boost the presidency of Andrés Manuel López Obrador, who campaigned on an anti-corruption platform and is a critic of the energy reforms.