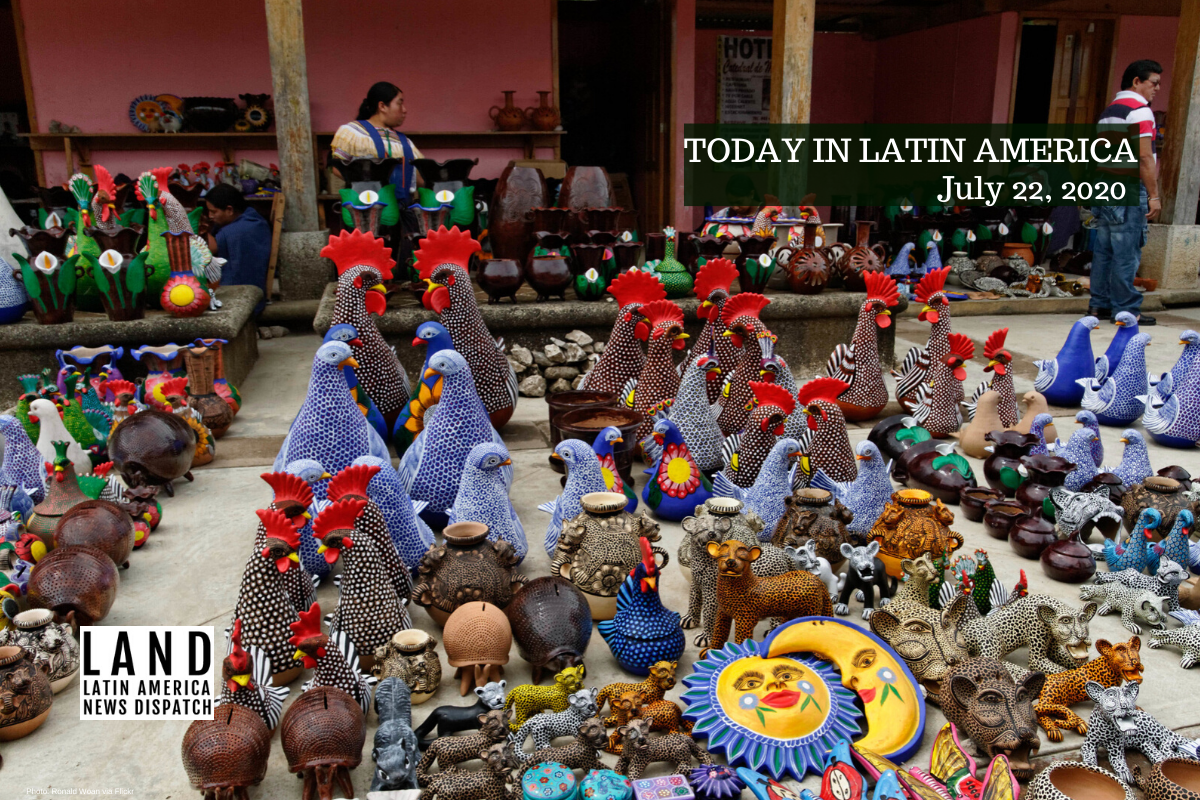 MEXICO: Authorities in San Cristóbal de las Casas, Chiapas confirmed that they found 23 children during a home raid in search of a missing child. According to prosecutors, the children were forced to make and sell crafts in market places, and endured psychological and physical torture. Three women suspected of conducting a human trafficking ring and kidnapping the children were detained during the raid. The children are between two and 15 years old, along with three infants.

San Cristóbal is a tourist destination in Southern Mexico, and it is common to see young children selling handicrafts on the streets. The search was conducted in relation to the case of a two-year-old boy who went missing on June 30. Security camera footage shows an young adolescent girl leading the boy, who speaks the Indigenous language Tzotzil, away from his mother. Authorities did not find the child at the home and said they will continue the search.

The news comes as international security officials warn that human traffickers may be exploiting national lockdowns leaving more families in poverty and vulnerable to crime. Government figures showed an increase in homicides and other crimes during the pandemic earlier this week.

BRAZIL: Health officials will begin a three-month test of a new coronavirus vaccine produced by a Chinese pharmaceutical company. It is one of nearly two dozen vaccines that are currently being tested worldwide. Nearly 900 volunteers at Hospital das Clínicas are expected to be tested. The volunteers will be analyzed during scheduled appointments every two weeks after taking the vaccine over a period of 90 days. The vaccine is currently in its final testing stages. A total of 9,000 volunteers will be tested throughout the country. Brazil currently has the second highest number of coronavirus cases in the world, trailing only to the United States.

BOLIVIA: A special police task force collected 420 bodies suspected to have died of COVID-19 last week in La Paz and Santa Cruz. The bodies were recovered from streets, cars and places of residence. Since April, police officials have recovered more than 3,000 bodies around the country suspected of having succumbed to the coronavirus. The news comes as the general commander of Bolivian Police was confirmed to have tested positive for COVID-19. Bolivia currently has more than 62,000 positive cases.

COLOMBIA: The mayor of Bogotá announced that the nation’s capital will be extending its strict lockdown to limit the spread of coronavirus. The lockdown, which will affect 5 million people, comes as the federal government refuses to extend the national quarantine despite an increase in coronavirus cases. The measures initiated by the president will be applied until August 1, whereas Bogotá will be on lockdown until August 14. President Iván Duque has been hesitant in expanding the lockdown due to the economic fallout during the pandemic that has affected more than 5 million jobs. Colombia currently has more than 211,000 cases of coronavirus.

COLOMBIA-VENEZUELA: More than 90,000 Venezuelans in Colombia have attempted to return to their home country due to the pandemic. Immigration officials in Colombia have warned against Venezuelans’ attempts to return due to fear of further spreading COVID-19 in both nations. Venezuela’s government currently only allows people to cross into Venezuela from Colombia on certain days of the week. The Simón Bolivar bridge, where most of these migrants have been crossing the Venezuelan border, currently has temporary housing with medical resources available to limit the spread of coronavirus.

PUERTO RICO: Police officials will now be enforcing mask-wearing, as the island endures a drastic increase in coronavirus cases. Commissioner Henry Escalera confirmed that residents and travelers alike not complying with the governor’s executive order will be stopped and possibly fined if they fail to wear a mask. Individuals who violate the executive order may face a fine of up to $5,000 and a six month prison sentence. In his statement, Escalera also emphasized that hundreds of officers are also currently infected with COVID-19, so resources to enforce the order are limited. A man in San Juan was recently issued a citation for not wearing a mask, and is expected to appear in court later this month.

PANAMA: One thousand restaurants have had to close due to economic struggles during the pandemic. New data suggests that there has been an 80% drop in restaurant sales nationwide, and a closure of at least 20% of Panama’s restaurants. Several food businesses have attempted to use social media to sell food during the pandemic, but worries about hygiene in crowded places such as apartment complexes have left many struggling to make ends meet. Panama’s economy is expected to be significantly impacted by the closures and the coronavirus in general, with economic activities reportedly falling more than 34% since this past April.

MEXICO: The Ministry of Health confirmed that there are now over 40,000 deaths due to COVID-19 in the country, and more than 356,000 positive cases. President Andrés Manuel López Obrador has asked Mexico’s governors to continue to coordinate with health officials and to aid in combating the pandemic. The daily death toll has also increased significantly, with nearly 300 people dying of the coronavirus in a single day earlier this week. The country continues to be one of the worst affected by the pandemic in the world.