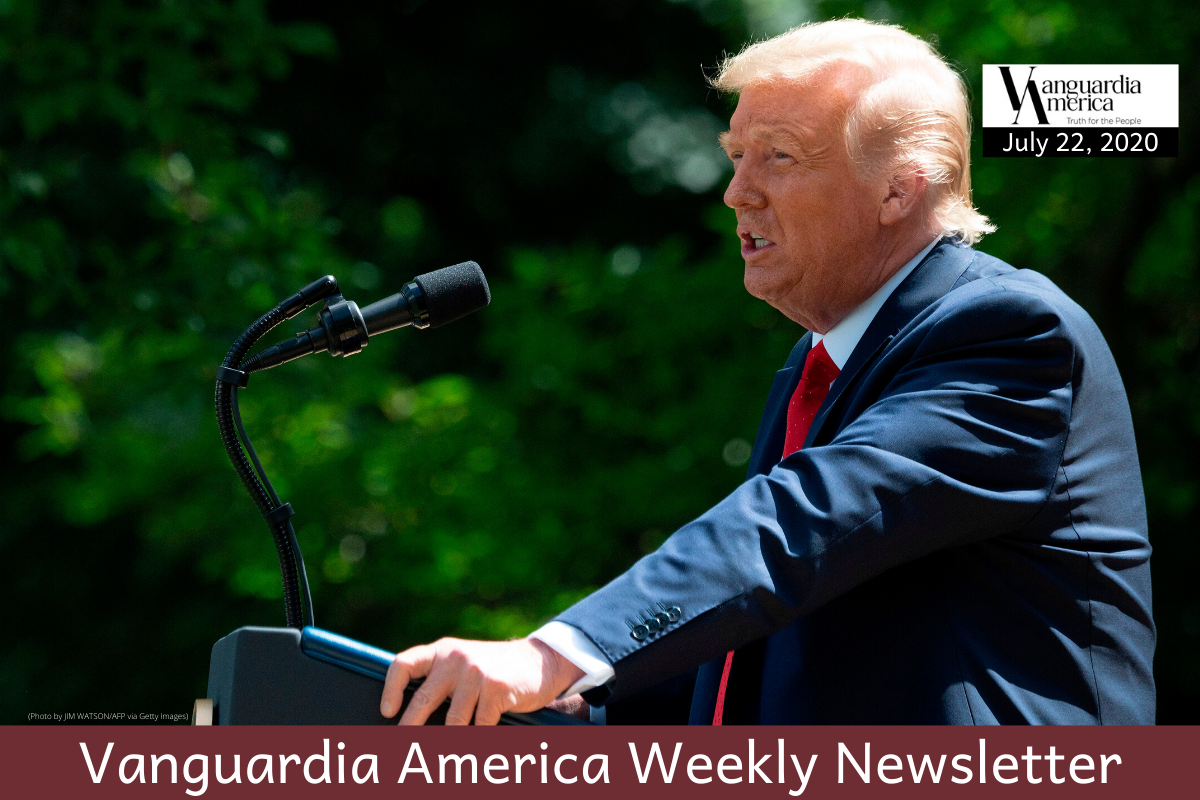 U.S. President Donald Trump speaks at the Rose Garden at the White House in Washington, DC, on July 9, 2020. (Photo by JIM WATSON/AFP via Getty Images)

Less than a year after President Donald Trump lost a fight at the Supreme Court to include a citizenship question in the census, the president has taken another stab at incorporating his anti-immigrant agenda into the decennial count.

The president this week ordered the exclusion of undocumented immigrants in the once-a-decade census tally when legislatures across the country redraw congressional district boundaries in 2021. Trump’s surprise directive came in the form of an executive memorandum on Tuesday.

Pro-immigrant advocates have vowed to challenge the president’s directive in court.

“We are outraged at the lengths Trump’s xenophobic administration is willing to go to try to erase the presence of immigrants in our communities. Not only is this move unconstitutional, but it is a clear attempt to scare and silence us,” said Yadira Sánchez, co-executive director of Poder Latinx, a nonprofit working to boost Latino voter turnout and census participation.

Arturo Vargas, CEO of the National Association of Latino Elected and Appointed Officials Educational Fund CEO, said, “Policy memoranda cannot change the U.S. Constitution. The Fourteenth Amendment of the Constitution makes it unequivocally clear that all ‘persons’ are to be counted in the census…”

Thomas A. Saenz, president and general counsel of the Mexican American Legal Defense and Educational Fund, pledged that MALDEF will go to court “to stop this latest example of blatantly unconstitutional executive action by a failed presidency.”

Saenz added that Trump’s action was another example of “the lawlessness of this administration” and predicted the memorandum “will be swiftly struck down by the federal courts.”

LULAC National Chief Executive Officer Sindy M. Benavides said, “This is a ploy to shift attention from the failure of this administration to protect all Americans from Covid19.”

The practical effect of Trump’s memorandum, if it survives a court challenge, would not come until sometime in 2021, well after this year’s general election in November.

So far, more than 90 million households nationwide have filled out the 2020 census, according to NALEO, but an expected undercount of Latinos could cost local and state governments hundreds in lost federal funding. The census can at my2020census.gov.

Hollander was found dead on Monday. He apparently shot himself.

In what’s been described as an online manifesto, Hollander wrote, “Female judges didn’t bother me as long as they were middle age or older black ladies…Latinas, however, were usually a problem…”

Salas is the first Hispanic woman to serve as a federal district judge in New Jersey. The daughter of Cuban and Mexican immigrants, she was nominated to the bench by former President Barack Obama in 2010. “Salas was recently assigned to a high-profile case involving convicted sex offender Jeffrey Epstein and Deutsche Bank,” according to NBC Latino.

ABC News reports that Salas presided in a case involving a 2015 lawsuit in which Hollander, ironically, represented a woman challenging the male-only U.S. military draft. Salas sided with the plaintiff in the case against the Selective Service System. Hollander, who was replaced by another attorney in 2019, alleged that Salas had unnecessarily delayed the case.

In his online writings, Hollander bitterly criticized former Secretary of State Hillary Clinton, Supreme Court Justice Sonia Sotomayor and President Obama. He also claimed to have once served as a volunteer for “the presidential campaign of Donald Trump,” who Hollander insisted was “telling the truth about illegal aliens in his bid for the Presidency.”

The Trump campaign has not confirmed if Hollander volunteered during Trump’s 2016 bid for the White House. During his campaign, Trump repeatedly claimed a Latino federal judge, Gonzalo Curiel, could not be trusted to rule fairly in a case that involved now-defunct Trump University because the judge was “Mexican” and the candidate had criticized Mexican immigration. Curiel was born in Indiana.

Puerto Rico’s Gov. Wanda Vázquez Garced is now under formal investigation for the alleged mismanagement of supplies intended for the victims of a series of earthquakes that rocked the island in December and January.

A special prosecutor has been assigned to investigate the governor and four other government officials.

The investigation stems from the release of a video in January by citizen journalist Lorenzo Delgado Torres that showed pallets of what the New York Times described at the time as unused “emergency aid sat gathering dust in a government property … as thousands of people prepared to spend their third week sleeping outside to stay safe as a swarm of earthquakes continued to assail the island.”

A spokeswoman for Gov. Vázquez told the Associated Press the governor earlier this month said she welcomed the investigation, which Vázquez called “vengeful” and “rigged.”