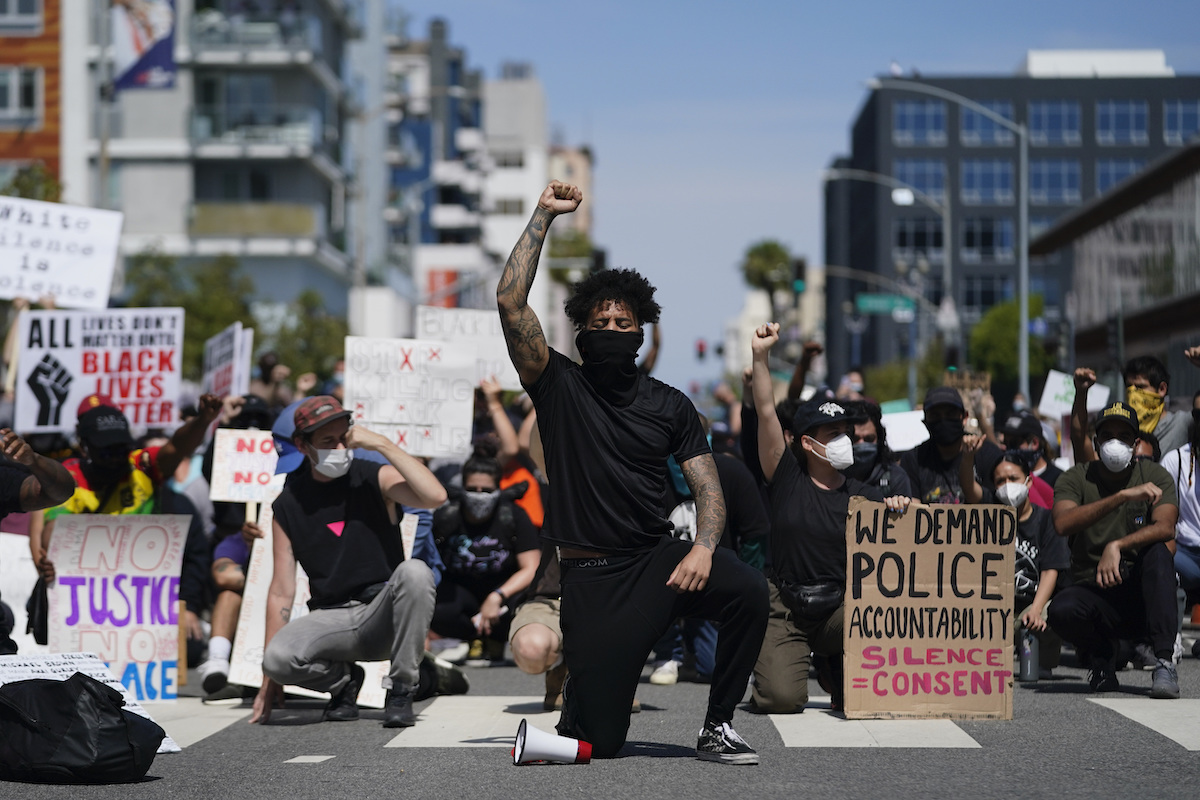 In this May 31, 2020 file photo, demonstrators kneel in a moment of silence outside the Long Beach Police Department in Long Beach during a protest over the death of George Floyd. While protests continue, different forms of activism have played a large role in the current Black Lives Matter movement. (AP Photo/Ashley Landis, File)

WASHINGTON, D.C. — Kalima Desuze was in lockdown mode this spring at her home in Brooklyn. She was busy working full-time, maintaining her bookstore business on the side along with her husband and taking care of their baby when she and two other members of her family contracted COVID-19.

Thankfully she and her family recovered after weeks of being ill, but the pandemic wasn’t over, and they still had to be careful about leaving the house.

Then George Floyd was killed by police in Minneapolis, and protests erupted across the country.

Desuze, like many Americans, had to decide how she would participate and stay safe at the same time.

For reasons of the pandemic, aging, or preference and innovation, many activists are staking claim to alternate forms of activism in light of the COVID-19 era.

Desuze has been an activist her whole life. She used to spend a lot of time organizing and marching, especially during the Black Lives Matter protests that followed the police killing of Michael Brown in 2014.

And yet she felt that this time she couldn’t. In addition to concerns over coronavirus, she’s getting older and is busy working 13+ hour days.

“I really stopped because I got pregnant and had the baby in 2018. My life dramatically shifted,” Desuze said.

Not being able to protest in the streets has been hard for her, but instead she’s been finding different ways to be part of the movement.

Desuze has been curating book lists by Black authors and anti-racist book packs for children for her bookstore, Cafe con Libros. She’s also been blogging about recent events and how she’s managing to take care.

“We should be reading [books] about everybody and, and reading about one another all the time. And being in dialogue,” Desuze said. “And so that’s my form of activism right now.”

Different forms of activism have played a large role in the current Black Lives Matter protests. From viral Instagram art campaigns sharing illustrations honoring the victims of police violence, to social media posts about how to educate immigrant elders about the U.S.’s legacy of anti-Black racism, and virtual dance parties for self-care, the growth of different forms of activism inspires hope that the movement will continue to innovate and be sustained.

“In the end, we will remember not the words of our enemies, but the silence of our friends.” #SayTheirNames #AhmaudArbery #BreonnaTaylor #GeorgeFloyd #ThisisAmerica #BLM

Haylee Price and Kyndall Ashe started an Instagram account this spring where fellow Black students from their alma mater share stories of racism they experienced on campus. “Black Amherst Speaks” was inspired by other accounts that sprouted up in recent months, where Black students and alumni shared mostly anonymous stories of racism on elite high school and college campuses.

Research shows that one tool online movements can use to be their most effective is to center and uplift the stories of the people impacted by injustice.

Price and Ashe said they initially didn’t think of their Instagram account as a form of activism, but simply as a reaction to seeing injustice.

“The both of us, we didn’t necessarily set out to do this to say that we are activists,” Ashe said. “It was more, we know people have stories to tell. And we just think that they need to be shown to the world.”

Their viewpoint changed when they started getting messages thanking them for starting the account, and calling them activists. “This has reminded a lot of people, including myself, that anything we can do to educate someone new or help to change the minds of people who may be naysayers… it’s reminded me that there’s not one kind of activism,” Ashe said.

Ashe is not the only one who has been reminded of that lately. Activists in DC have been holding midnight yoga sessions at the newly-named Black Lives Matter Plaza:

Organizers from the 15 Percent Pledge are asking business owners to commit to filling at least 15 percent of their shelf space with products from Black-owned businesses.

Chef Samin Nosrat encouraged her more than half a million followers on Instagram to follow and frequent the businesses of dozens of her favorite Black chefs: