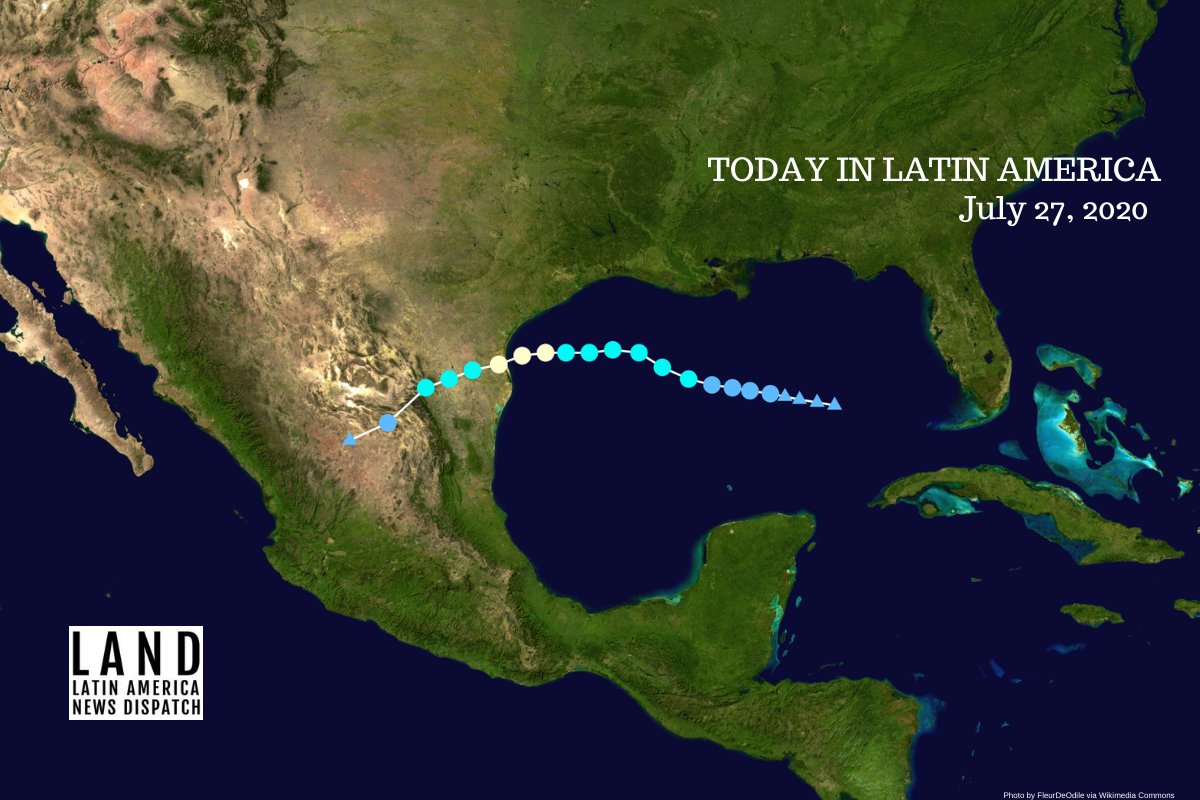 Hurricane Hanna made landfall in Texas on Saturday and is moving south into Mexico. (Photo by FleurDeOdile via Wikimedia Commons)

MEXICO-UNITED STATES: The first Atlantic hurricane of the 2020 season made landfall in Texas near the Mexico border over the weekend, causing flooding in many places already struggling with surges in COVID-19 cases. Hurricane Hanna registered as a Category 1 storm when it came ashore on Padre Island near Corpus Christi.

Hanna was downgraded to a tropical depression yesterday as it moved south into Mexico, but heavy rain is expected to continue to batter Coahuila, Nueva León and Tamaulipas. A maternity hospital in Reynosa, Tamaulipas, was flooded on Saturday night, with videos showing patients on gurneys as water pooled beneath them. The rains caused severe flooding in other parts of the city as well, and some people were trapped for several hours as they awaited rescue.

Hurricane Hanna is the first test for the United States and Mexico in hurricane preparedness amid the pandemic. Texas Gov. Greg Abbott said shelter for people displaced by the storm would be available in hotels to allow for social distancing. In Mexico, up to 800 shelters may be activated.

BRAZIL: President Jair Bolsonaro announced on Twitter Saturday that he tested negative for the coronavirus, a little over two weeks after he first tested positive. He posted a photo of himself smiling and holding a box of hydroxychloroquine pills, despite the recent results from a Brazilian study that cast further doubt on the drug’s ability to improve COVID-19 symptoms. Bolsonaro tested positive as recently as last Wednesday, but just a few days later he was seen riding a motorcycle and talking to people outside his official residence without wearing a mask.

BRAZIL: The National Institute for Space Research in Brazil (Inpe) said forest fires more than doubled in the Pantanal wetlands in the first six months of this year compared to the same period last year. So far in 2020, there have been 2,534 forest fires recorded in the Pantanal, the largest tropical wetlands in the world. Over the same time period last year, there were 981 fires. The overall number of fires in the Amazon this year is down from 2019, however. Earlier this month, Bolsonaro imposed a four-month ban on setting agricultural and forest fires in the Amazon, but his policies have allowed for greater destruction of the rainforest.

CHILE: President Sebastián Piñera on Friday signed a historic pension reform law to allow Chileans to withdraw 10% of their pension early to help cushion the economic blow caused by the coronavirus pandemic. Piñera was opposed to the reform, but Congress approved it last week and he agreed to sign it. Chileans will be able to request their withdrawals starting this Thursday. Chile has one of the highest COVID-19 infection rates in Latin America, and the pandemic is exacerbated by a high rate of inequality.

PERU: A new study shows that a quarter of the population in Lima and nearby Callao have been infected with the coronavirus. Callao, which is located on the coast and is home to Jorge Chávez International Airport, has the highest infection rate at 30%, followed by north Lima at 28.7%. Despite being one of the first Latin American countries to lock down, Peru has among the highest rates of infection and death, in part due to social inequality and informal workers’ inability to stay home and isolate.

BAHAMAS: Less than a week after banning U.S. tourists from traveling to the Bahamas due to the coronavirus pandemic, the islands have reversed course to allow visitors from all countries. Visitors must quarantine for 14 days upon arrival and then take a COVID-19 test. Though the government did not provide a reason for the reversal, the Bahamas rely on tourism from the United States to support their economy. Many Caribbean nations are welcoming back tourists, but not all want travelers from the United States. Aruba, Bonaire and Curaçao all restricted U.S. tourists when they initially opened their borders earlier this month.

EL SALVADOR: Former Defense Minister David Munguía Payé was arrested last week for his alleged involvement in a deal to provide perks to Salvadoran gangs in order to lower the country’s murder rate. The deal was made in 2012 under former President Mauricio Funes, who has denied governmental involvement in the pact. Attorney General Raúl Melara said an investigation showed that Munguía and Funes were the ones responsible for conceiving and executing the plan. Funes is currently in Nicaragua, where he successfully sought political asylum in 2016.

MEXICO: A tourist was shot to death and several others are missing after an attack in the resort town of Puerto Vallarta, Jalisco. The attack happened on July 18, but Mexican officials did not release information about it until Saturday after the newspaper Reforma published a report that the tourists had been kidnapped. Officials have not confirmed or ruled out a mass kidnapping. The group, made up of 13 or 14 people from the state of Guanajuato, was riding in ATVs and SUVs on a tourist route when an armed convoy began to fire shots at them. One was shot and later died at a hospital, and the rest have not been seen since the attack.

UNITED STATES: The U.S. government said Friday it was placing all new DACA applications on hold while it decides whether to try to end the program again. Last month, the Supreme Court blocked the Trump administration’s attempt to end it. The Department of Homeland Security has also failed to update its website to reflect the Supreme Court ruling, prompting criticism from U.S. District Court Judge Paul Grimm and immigration advocates.