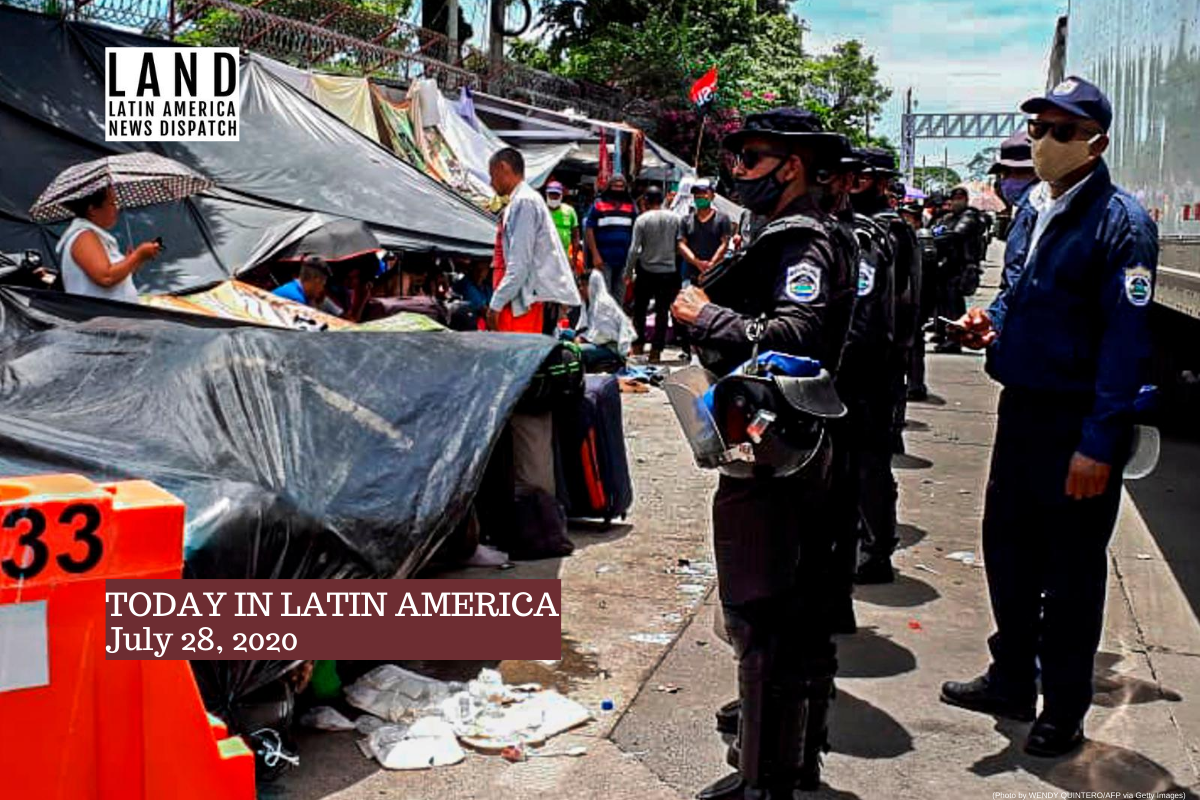 NICARAGUA: The Office of the United Nations High Commissioner for Human Rights asked the government of Daniel Ortega to respect the rights of Nicaraguans who are trying to return home but have been unable to enter the country because of the coronavirus pandemic. Hundreds of Nicaraguans are stranded on border regions in Costa Rica, Guatemala and Panama.

About 500 migrants are stuck on the border with Costa Rica, forced into overcrowded camps with little food, shelter and water. They are unable to go back into Costa Rica or enter Nicaragua without first presenting negative COVID-19 tests, a requirement many didn’t know about until they had already arrived at the border. Many of them had fled to Costa Rica for economic or political reasons following the deadly 2018 protests in Nicaragua.

On Sunday, Ortega said the virus was under control in his country. The government has reported less than 3,500 infections and only 108 deaths, but health experts say the number is far higher.

BRAZIL: A coalition of Brazilian health professionals asked the International Criminal Court on Sunday to sentence President Jair Bolsonaro for genocide over his handling of the coronavirus pandemic. The group, led by UniSaúde, accused Bolsonaro of crimes against humanity for discouraging people from practicing social distancing and wearing masks. Bolsonaro has  flouted these measures himself and even chided his own staff for following them, using a homophobic slur to refer to those who wear masks. More than 87,000 people have died from COVID-19 in Brazil, with nearly 2.5 million infected.

BOLIVIA: Interim President Jeanine Áñez said yesterday that she has been discharged after recovering from COVID-19. She tested positive for the virus on July 9 and received negative results on July 22, she said in a statement. Several members of Áñez’s cabinet have also contracted the virus. More than 65,000 people have been infected in Bolivia, overwhelming the hospitals and cemeteries. With few resources, Bolivians —encouraged by Áñez’s government— have turned to unproven and dangerous treatment methods, including drinking chlorine dioxide.

COLOMBIA: The Attorney General yesterday charged Diego Cadena, the lawyer for former President Álvaro Uribe, with bribery and fraud for allegedly paying two witnesses in 2018 to testify in favor of Uribe, who was under investigation for bribery and witness tampering. The prosecution said Cadena went to a prison and offered one of the witnesses, a former paramilitary member, $200 million to change his testimony and instead testify against Iván Cepeda, an opponent of Uribe who has accused the former president of founding a death squad in Antioquia. Cadena said yesterday in a virtual hearing that he did not accept the charges.

HAITI: Thousands of evangelical Haitians protested in Port-au-Prince on Sunday against a change in the penal code that bans discrimination based on sexual orientation. The change would go into effect in 2022. Haiti would still not legally recognize same-sex marriage, but the penal code change means religious leaders could not refuse to marry same-sex couples. Homophobia has increased in Haiti in recent years as evangelical Christian organizations have come to the island to help after the 2010 earthquake.

GUATEMALA: Guatemala began to reopen its economy yesterday after four months of lockdown because of the coronavirus. The borders will remain closed. Reopening will happen at different rates across the country according to a color-coded alert system. Almost half of Guatemala’s municipalities are currently in the red high alert, meaning COVID-19 cases are not decreasing. The health department will reassess each municipality every two weeks. Guatemala has recorded 45,000 COVID-19 cases so far, with 1,700 deaths.

MEXICO: Two people have died and six are missing in Mexico following heavy rains from tropical depression Hanna, which continues to make its way into Mexico as it weakens. Hundreds of people have also been evacuated due to flooding. Experts have warned that Hanna could cause mudslides and flash floods in the coming days in northern Mexico near the Texas border. The governor of Nueva León suspended public transportation and government activities in response to the natural disaster.

MEXICO: The United Nations refugee agency will build 48 temporary houses for asylum seekers at the U.S.-Mexico border as they await their hearings. Some of the houses will be built in Reynosa and Matamoros, which were impacted by Hanna. The U.S. Department of Homeland Security and the Department of Justice announced last week that they will resume asylum hearings for migrants waiting in Mexico, but it will likely be weeks before that actually happens due to the high numbers of COVID-19 cases in U.S. border states.

MEXICO: President Andrés Manuel López Obrador said yesterday that he hopes the presidential jet will be sold in a few days. After a press conference, he also allowed journalists to see the plane and take photos. The president is allegedly in talks with a potential buyer who has offered to pay part cash and part medical supplies. López Obrador has been trying to sell the jet in a symbolic stance against corruption since he came into office in December 2018. Starting in March, he also offered lottery tickets to Mexican citizens, but only about a quarter have been sold. The winner would not actually get the jet, but rather $90 million.