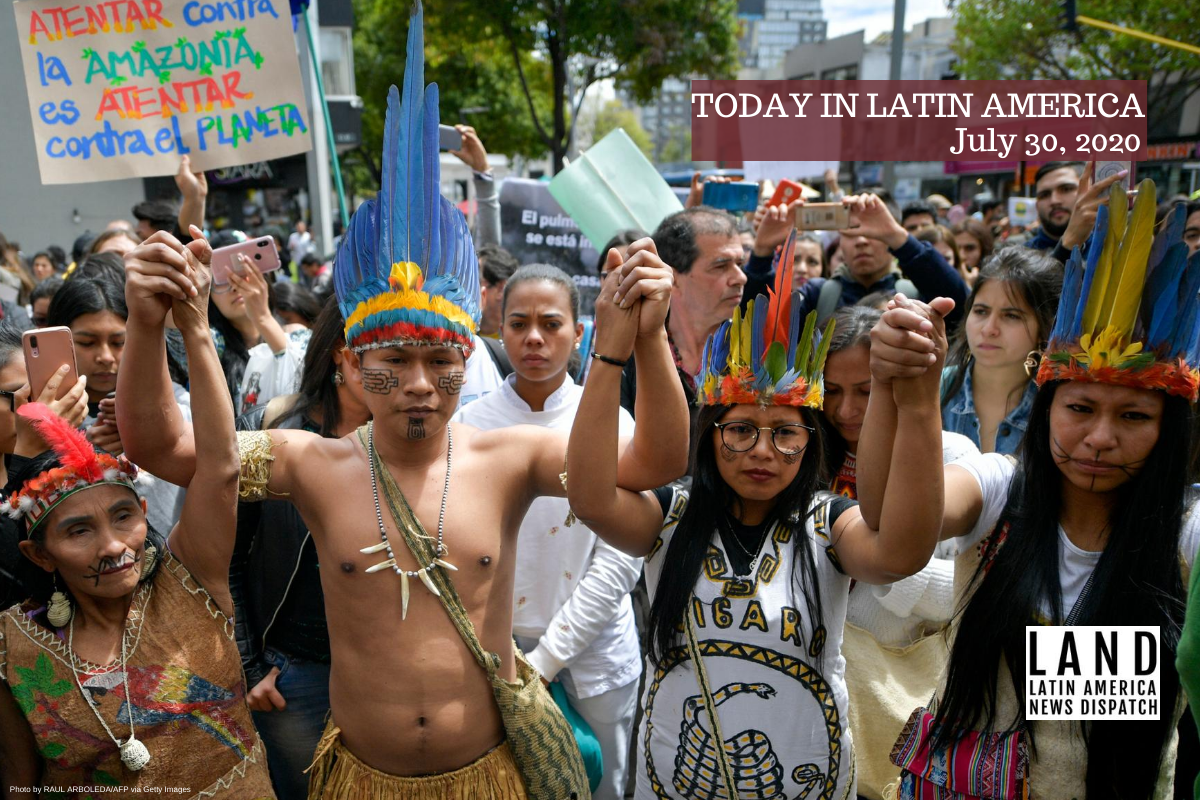 Colombian natives and activists during a protest in Bogotá, Colombia, on August 23, 2019. (Photo by RAUL ARBOLEDA/AFP via Getty Images)

REGION: For the eighth year in a row, Latin America has been deemed the world’s deadliest region for environmental and land rights activists. According to Global Witness, a nonprofit which specializes in environmental and human rights research, more than two-thirds of all killings of these activists occurred in the region.

Colombia was ranked the most dangerous country for environmental activists, with 64 killings in 2019. Other countries with high numbers of murders include Brazil, Mexico, Honduras and Guatemala. The study also found that Indigenous communities are disproportionately affected by this violence, with more than 40% of victims last year identifying as Indigenous.

The report comes only a week after five Garifuna land rights activists were kidnapped in unmarked vehicles in Honduras, gaining international attention. Global Witness recorded 14 murders of environmental and land defenders in Honduras last year, making it the most dangerous country per capita. Protests have occurred around the country since the kidnapping, with the Garifuna community and allies demanding that the men be released.

BRAZIL: More than 200 pregnant women who tested positive for coronavirus have died either during the last months of their pregnancy or postpartum. At least 1,860 pregnant women have tested positive around the country. According to reports conducted by health officials, nearly 23% of these women did not have access to hospital beds or other medical supplies where they were being cared for. The research also found that Black mothers have a death rate two times higher than white mothers. Brazil’s maternal mortality rate is significantly higher than that of the United States, the only other country with nearly as many positive coronavirus cases.

PARAGUAY: More protests are expected to take place in major cities today in response to the economic crisis and the government’s weak response to a recent surge in COVID-19 cases. Local officials plan to enforce the country’s quarantine by sending hundreds of police and militia into the cities where protests will be held. The military response comes after some protestors were reported to be looting stores earlier this week. Some politicians have promised to discuss the ramifications of the country’s recent economic crisis today in response to unrest in the country.

COLOMBIA: The lawyer representing Vice President Marta Lucía Ramírez announced on Twitter yesterday that she was dropping the criminal complaint against against journalist Jeremy McDermott of Insight Crime. The Committee to Protect Journalists condemned Ramírez’s defamation lawsuit. The lawsuit was filed against McDermott in June after the journalist published an article on a suspected connection between Ramírez’s husband and a drug trafficker. McDermott says that his reporting did not implicate Ramírez and that she was given the chance to respond to the article before its publication.

ECUADOR: After being one of the epicenters of the virus in the region, Ecuador will now participate in clinical trials for a COVID-19 vaccine. The country is part of an international initiative to distribute the vaccine in equal amounts and at fair prices once it becomes available. Health officials are also attempting to secure funds for more medical supplies as hospitals in Quito and other cities that are still overwhelmed by the coronavirus. The country currently has more than 83,000 positive cases and more than 5,000 deaths.

PERU: Former First Lady Nadine Heredia is facing new criminal charges and an arrest warrant, which has been temporarily suspended due to COVID-19. Heredia was last held in custody in 2017 due to money laundering charges, but her case was annulled by a federal court in 2018. A judge that is a part of Peru’s anti-corruption task force will review her case this week to see if she should be placed in custody. Heredia has been accused of aggravated collusion and corruption during her time in office. The ruling will also possibly affect other politicians who served under Heredia and her husband who have been accused of corruption.

REGION: Tropical Storm Isaias is affecting the region after it hit land last night. More than 100,000 people were impacted by power outages earlier this week in Puerto Rico. The more than 50mph winds may possibly cause damage to buildings damaged in Hurricane Maria in 2017. Heavy rains are expected to continue in the Caribbean until Friday, with Haiti and the Dominican Republic feeling the effects of the storm as early as today. Coastal flood warnings have also been placed on the islands. Read more about how to prepare for a tropical storm here.

EL SALVADOR: President Nayib Bukele announced that the country’s economic reopening will be delayed until August 20 due to a recent increase in COVID-19 cases. The planned Phase 2 will include malls, banks, supermarkets, pharmacies and other stores reopening and operating at limited capacities. El Salvador’s first phase of reopening began in June. While the country has only reported 439 deaths, the number of burials following the COVID-19 protocol exceeds 2,000, raising doubts of the accuracy of the official tally. Prosecutors have also begun an internal investigation into the government’s use of funds to combat the pandemic.

GUATEMALA: Dozens of unidentified COVID-19 victims have been buried in body bags due to protocols that call for rapid burials of those affected by the virus. Public hospitals are attempting to create archives with photos of the deceased in the hopes that families will eventually be able to identify the bodies. Those who are unidentified are being kept in closed off areas of cemeteries, with numbered graves.

MEXICO: The Supreme Court failed to rule on what would have been a landmark abortion case, sending it back to lower courts in a 4 to 1 ruling. The case in the state of Veracruz would have paved the way for further legalization of abortion in Mexico. The judges ruling claimed that the court would be unable to “order specific legislative content” due to the court’s inability to modify laws. Activists criticized the court for failing to come to a conclusive ruling that would have helped decriminalize abortion. In Mexico, abortion is only legal in Mexico City and Oaxaca, and can only be conducted during the first 12 weeks of a pregnancy.