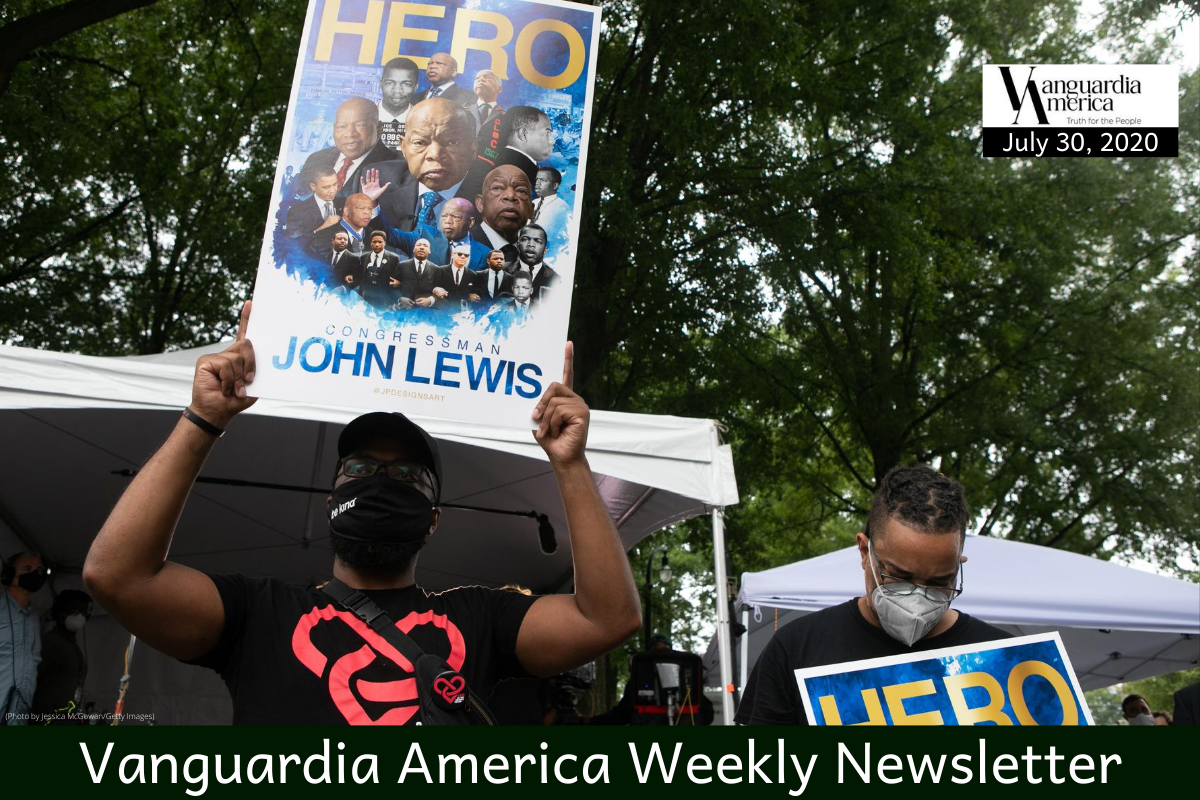 In an essay published on the day of his burial, Congressman John Lewis of Georgia delivered a final, nonviolent call to action to the millions who have taken a vow to fight for social justice. “While my time here has now come to an end, I want you to know that in the last days and hours of my life you inspired me,” Lewis wrote in the postmortem essay published Thursday by The New York Times. “You filled me with hope about the next chapter of the great American story when you used your power to make a difference in our society.”

Latino leaders from across the nation offered tributes and condolences.

“We have witnessed the passing of one of our country’s greatest civil rights leaders who spent his life advocating for the poorest, weakest and most vulnerable,” said Domingo Garcia, national president of the League of United Latin American Citizens (LULAC). “What I will always remember about John will be his great humility which made his voice so powerful and his truth so unstoppable … America will miss his counsel.”

LULAC CEO Sindy Benavides, said, “From the streets of Selma, Alabama to the halls of Congress, John Lewis’ life journey lifted our nation … John Lewis was a man by whom others set their compass on both his integrity and his staunch refusal to compromise when it came to America’s principles of freedom and liberty for all. LULAC has lost a valued and faithful ally who never wavered in standing with us on immigration, voting rights, equality for women and so much more.”

Dr. Juan Andrade of the U.S. Hispanic Leadership Institute called Lewis “a true champion of voting rights in America … While tens of millions have benefited from his life and career, it was a personal privilege and an honor for me to work with him and learn how to empower others. He shaped my life’s work, and I mourn his loss in a very personal way.”

Thomas A. Saenz, President and General Counsel of the Mexican American Legal Defense and Educational Fund (MALDEF), said, “The remarkable life of John Lewis will resound forever across the globe as the epitome of lifelong commitment to justice … The fight for civil rights will continue in the bright light of his example.”

Ricardo Lara, president of the National Association of Latino Elected and Appointed Officials (NALEO), said, “The American people have lost a giant in the passing of Congressman John Lewis. … who remained an ally of Latino Americans throughout his entire career… Congressman Lewis’s unapologetic and fierce opposition to family separation at the American border was a testament to his unequivocal support for immigrants and those who look to America as a refuge and beacon of new beginnings. His unwavering willingness to get into what he called “good trouble” will forever remind us of the self-evident truths and undeniable foundations of justice that he helped facilitate.”

“He was called the conscience of the Congress, but he was really the conscience of the nation,” said UnidosUS President and CEO Janet Murguía. “The loss of this uncommonly decent, moral, humane, and good man is heartbreaking, and especially hard to bear given the current state of our nation… He said many times that ‘We are all one family, living in one house,’ and that he believed that our fight was moving the entire civil rights movement forward. To have his blessing for the Latino civil rights movement was something that both humbled us and that we will forever cherish.”

Despite a Supreme Court ruling in June rejecting President Trump’s effort to kill the Deferred Action for Childhood Arrivals (DACA) program, the president has blocked the acceptance of new applications by young immigrants the Obama-era initiative was designed to protect from deportation.

Rules issued Tuesday by the Department of Homeland Security also ordered a limit on renewals to one-year instead of two.

“They are profiting from us, from our work, from our effort,” Lidieth Arevalo, a DACA recipient, told NBC Latino. “They do not want to give us the humanity we deserve.”

House Votes to Create a Latino Museum on National Mall in Washington, DC

In a rare bipartisan vote, the House of Representatives has passed legislation to create a national Latino Museum.

“The Latino story is an American story, and our history is a central threat in the history of our nation,” said Rep. Joaquin Castro, chair of the Congressional Hispanic Caucus.

“It’s time for Latinos to see our contributions, our culture and our history reflected in all institutions, including the Smithsonian museums,” said Rep. Sylvia Garcia, D-Texas. “It’s time for our children to come to a museum and see the stories of their own heritage.”

The National Museum of the American Latino Act now goes to the U.S. Senate, where it has 30 co-sponsors. The museum would be located on the National Mall in Washington, D.C.