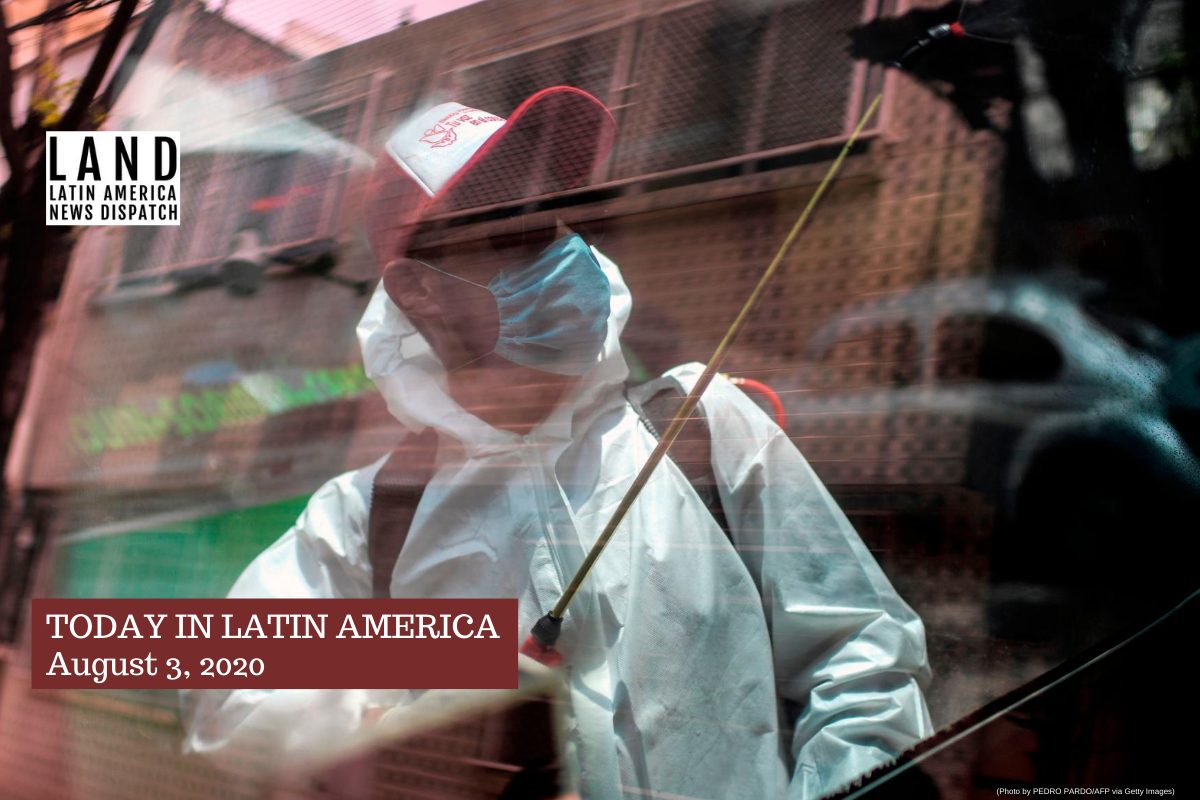 A cleaning worker wearing personal protective equipment (PPE) is reflected on a window as he disinfects a public tranport van in Mexico City, on July 30, 2020. (Photo by PEDRO PARDO/AFP via Getty Images)

MEXICO: As of Friday, Mexico surpassed the United Kingdom in the number of COVID-19 deaths, trailing only the United States and Brazil. By Sunday, the number of reported deaths in Mexico was 47,746. Mexican Health experts believe the actual number is much higher. Following the announcement, nine Mexican governors called for the resignation of Assistant Health Secretary Hugo López-Gatell, who is leading the pandemic response.

Mexico has not yet reached its peak in cases. On Saturday, the health ministry reported a record 9,556 new cases in a day. The World Health Organization warned of “response fatigue” in several countries dealing with surges and prolonged outbreaks, including Mexico.

Despite the rise in cases, Mexico has been reopening its economy and President Andrés Manuel López Obrador has consistently downplayed the severity of the pandemic. A day after his government announced it had surpassed the United Kingdom in COVID-19 deaths, López Obrador deflected questions about why he won’t wear a mask, saying he would only wear one “when there is no corruption.”

BRAZIL: More than 6,800 fires were recorded in the Amazon in July, an increase of 28% since last July, according to Brazil’s National Institute for Space Research. August is considered the beginning of the fire season, and experts worry there will be another drastic increase this month. President Jair Bolsonaro’s policies have encouraged deforestation, with devastating consequences for the Amazon. But as he loses favor amid the health and economic crisis caused by the pandemic, he has reversed some of his previous stances. Last month, he banned forest fires for four months, and in May, he ordered the military to work against deforestation.

ECUADOR: A judge overruled the suspension of former President Rafael Correa’s political party, Fuerza Compromiso Social, yesterday. The National Electoral Council had suspended the party, along with three others, on July 19 claiming there were irregularities in the registration process. Judge Fernando Muñoz said the suspension was not legitimate and violates the rights of Ecuadorians. The National Electoral Council has 72 hours to decide whether to appeal Muñoz’s decision.

PERU: Health Minister Pilar Mazzetti announced late last week that the coronavirus death toll in Peru could be more than twice as high as the official count of 19,021. Mazzetti said death certificates for more than 27,000 people listed COVID-19 as a cause of death, but they were not counted in the official tally because they were not tested for the virus. As Peru began opening its economy last month, the number of cases has increased. Peru ended July with a record 7,448 new infections in a single day.

VENEZUELA: A coalition of political parties led by Juan Guaidó announced yesterday that they would not participate in the December legislative elections, saying their participation would mean “collaborating with the dictatorship’s strategy.” The decision means the opposition will likely lose control of the National Assembly, which could harm Guaidó. The opposition leader called for mobilization, tweeting, “together we’re going to beat the regime,” but his supporters have grown frustrated in recent months as Guaidó fails to topple President Nicolás Maduro.

CUBA: Eusebio Leal Spengler, the beloved Havana city historian and public figure, died on Friday at 77 years old. Leal became famous for transforming and revitalizing Old Havana, leading President Miguel Díaz-Canel to refer to him as “the Cuban who saved Havana.” Cubans hung white sheets from their balconies to honor Leal and Díaz-Canel declared an official period of mourning.

GUYANA: Five months after a contentious presidential election, opposition candidate Irfaan Ali was declared the winner and sworn into office. President David Granger said he would respect the transition, but then added that he will “challenge the declared results lawfully, peacefully and purposefully.” Granger claimed victory after the March 2 election, but allegations of voter fraud led to a recount in June that showed Ali had won. The stakes were high in the election as Guyana gets ready for a massive oil boom.

COSTA RICA/NICARAGUA: Several organizations and private companies in Costa Rica are providing free coronavirus tests to the hundreds of Nicaraguans stranded at the border. Nicaraguan President Daniel Ortega will not allow them to re-enter their home country until they present negative test results, but most cannot afford to pay for the tests. As of yesterday, 169 Nicaraguans at the border of Peñas Blancas had received tests, and 148 tested negative. Organizations will provide food and health care to those who tested positive, who will be quarantined.

MEXICO: One of the most wanted gang leaders in Mexico was arrested yesterday. José Antonio Yépez Ortiz, “El Marro,” the leader of the Santa Rosa de Lima cartel, was captured by military and police in Guanajuato. The cartel is known for fuel theft across Mexico and has engaged in violent conflicts with the competing gang Jalisco New Generation Cartel. As the rivalry between the gangs has grown stronger in recent years, homicides in the region have gone up. Animal Político reports 1,096 people were killed in Guanajuato in 2016. During 2019, 3,540 people were killed.

MEXICO: A Mexican journalist and his bodyguard were shot to death yesterday in the city of Iguala in the state of Guerrero. Pablo Morrugares, the director of PM Noticias, was eating at a restaurant with his bodyguard when gunmen opened fire on them. Morrugares previously survived an assassination attempt in 2016. The gunmen have not been identified, and officials said the motive for the attack is unclear.

One thought on “Mexico Surpasses UK In COVID-19 Deaths, Behind Only US And Brazil”