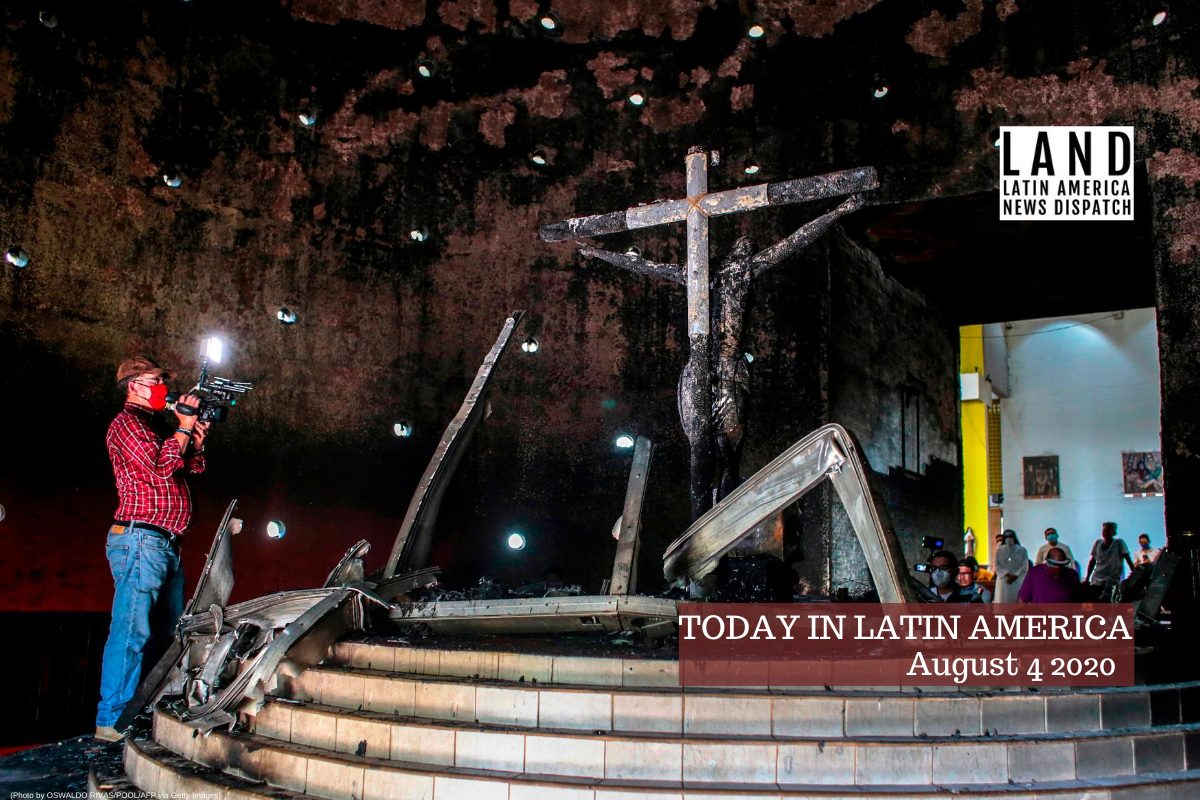 A cameraman records the image of "Christ's Blood" after a fire burnt it at the Cathedral in Managua on July 31, 2020. (Photo by OSWALDO RIVAS/POOL/AFP via Getty Images)

NICARAGUA: The Vatican is calling for an investigation into a fire at the Managua cathedral over the weekend that destroyed a 380-year-old sculpture of Jesus. Yesterday, Nicaraguan police said they believe the fire was accidental, caused by alcohol used to disinfect the church, but the archbishop of Managua said someone threw a “bomb” into the chapel. He called the fire an “act of terrorism.” The U.S. ambassador to Nicaragua, Kevin Sullivan, also condemned the fire as a “violent attack.”

Two other Catholic churches in Nicaragua reported damage within the last week. The chapel of Our Lady of Perpetual Help in Nindirí was desecrated last week. On Sunday, vandals threw rocks at an urn depicting Jesus in a chapel in León. Then they threw an object at the priest who was leading mass. Another church in Managua has also reported suspicious behavior outside the building recently.

BRAZIL: Indigenous leader Bernaldina José Pedro died in June from COVID-19. Pedro helped the Macuxi people win a 4 million-acre territory and traveled to Rome in 2018 to meet Pope Francis. As the coronavirus spreads in Brazil, thousands of Indigenous people, including those living in protected areas, have gotten sick. Nearly 100% of Brazil’s cities have reported COVID-19 cases.

BOLIVIA: The government has canceled classes across the country for the remainder of the school year due to the coronavirus pandemic. Minister of the Presidency Yerko Núñez said they made the decision because many areas, especially in rural Bolivia, do not have access to the internet. Remote instruction, which had been in place since March, was not working, he said. All students will automatically pass to the next year when classes eventually resume. Interim President Jeanine Áñez was criticized across the political spectrum for the decision. Former President Evo Morales said, “Only in dictatorships has the school year been closed.”

ECUADOR: Ecuador reached a deal with bondholders over its debt restructuring yesterday. It is considered a major victory for the country as it deals with the economic crisis caused by the pandemic. Ecuador has $17.4 billion in sovereign debt, partly due to the decline in the price of oil in recent years. In its deal with bondholders, the government will not have to pay any of the debt this year and will receive partial debt relief on $10 billion over the next four years. Last week, two U.S. investment firms tried to block the debt renegotiation deal, but a federal judge in New York denied their request.

VENEZUELA: The Associated Press reported yesterday that former Venezuela treasurer Claudia Díaz transferred $9.5 million out of Venezuela and into a vault in Lichtenstein. Díaz, who also used to be former President Hugo Chávez’s nurse, purchased 250 gold bars through a shell company in the Caribbean in 2014 and transferred them to the vault. The discovery is part of an investigation into shell companies and banks that have helped Venezuelan officials steal as much as $300 billion of state money over the last two decades.

PUERTO RICO: José Ortíz, the head of Puerto Rico’s state power company, is expected to resign tomorrow after hundreds of thousands of Puerto Ricans lost electricity from Tropical Storm Isaias last week. The island has dealt with frequent outages and a damaged grid since Hurricane Maria in 2017. Last Friday, Gov. Wanda Vázquez Garced demanded Ortíz give an explanation for the outages, and he initially blamed it on human error. Up to 400,000 people —equal to about a quarter of the power company’s customers— lost power from the storm.

PUERTO RICO: A federal judge ruled yesterday that it is unconstitutional to deny Puerto Ricans access to certain welfare benefits that other Americans get. The benefits include Supplemental Security Income, the Supplemental Nutrition Assistance Program and the Medicare Part D Low-Income Subsidy, which helps cover the cost of prescription drugs. The federal government previously denied Puerto Ricans these benefits because they do not pay federal income taxes.

PANAMA: Panama City Mayor José Luis Fábrega paid a fine for violating coronavirus lockdown measures after photos circulated on social media showing him at the beach over the weekend during a quarantine imposed by the Ministry of Health. Fábrega was walking on the beach in front of his home when police stopped him and issued a fine. “No one is above the law,” Health Minister Luis Francisco Sucre said after the incident.

MEXICO: Mexico’s 30 million students will begin classes remotely on August 24 as COVID-19 cases increase in the country. The government signed a deal with four television stations to broadcast school lessons. Rural communities will also be able to access the classes on the radio. Students will only be allowed to return to the classroom after states receive the “green light” to open safely with no restrictions. Secretary of Public Education Esteban Moctezuma Barragán said the decision was made to avoid having to switch from in-person to remote instruction midway through the year.