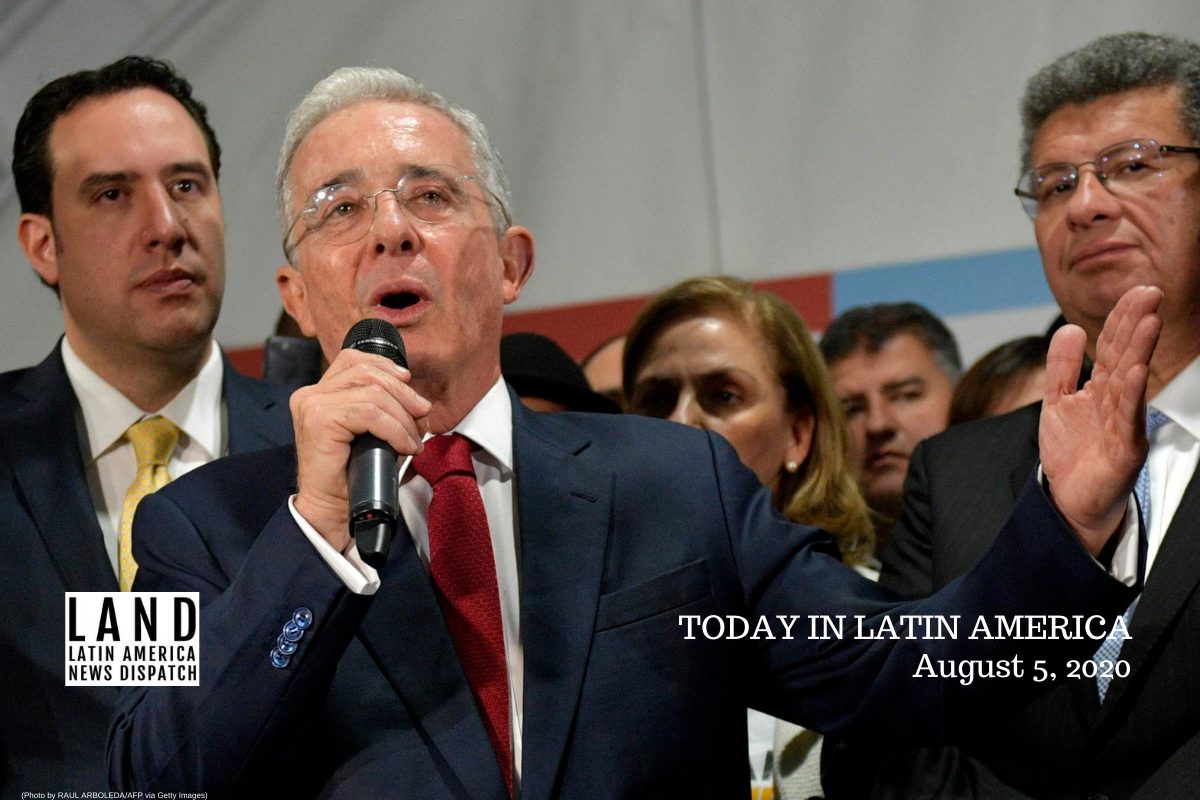 Former Colombian President (2002-2010) Alvaro Uribe speaks to supporters at the headquarters of the Democratic Centre political party in Bogotá, on October 8, 2019. (Photo by RAUL ARBOLEDA/AFP via Getty Images)

COLOMBIA: In a televised address, President Iván Duque announced that former President Álvaro Uribe will be held in custody as the Supreme Court investigates allegations of witness tampering. Uribe, president of Colombia from 2002 to 2010, has long been accused of criminal activities, including having ties to drug cartels and paramilitary groups.

The current probe against him comes after a senator accused Uribe of being a founding member of a paramilitary group involved in the decades-long civil conflict between the government and rebel groups. The ruling against Uribe is the first time in history that a Colombian president has been placed under house arrest.

Colombia is notorious for not holding powerful politicians accountable for instances of corruption. Uribe’s arrest has provoked both celebration and anger in Colombia, where he continues to be a contentious figure. The former president has been a mentor to the current president, and continues to be one of the most influential politicians in the country.

ARGENTINA: Law enforcement officers have asked a judicial court to place a prosecutor under house arrest during an investigation into alleged criminal activity. Prosecutor Gustavo Ponce Asahad has been accused by his colleagues of demanding money from criminals in exchange for judicial protection and having ties to an illegal gambling organization. Asahad’s ties to the organization were discovered during an investigation into his and his family’s properties. Asahad proclaimed his innocence in front of a court on Tuesday where prosecutors pleaded with the judge to place him in preventative detention.

BRAZIL: More than 200 people waited in line for nine hours to get tested at a free COVID-19 testing center in São Paolo. Many families who sought tests reported being asymptomatic, but wanted tests to not spread the virus to others. Some people began forming a line outside the center as early as 3 a.m. The center is expected to double the number of coronavirus tests it does daily this week. Brazil currently has more than 2.8 million cases of the coronavirus, and more than 95,000 deaths.

PARAGUAY: A shortage of medical resources has forced COVID-19 patients to purchase their own hospital gowns and face masks upon being admitted to the Hospital de Clínicas. According to a whistle-blower, patients must purchase the supplies for themselves and for the medical personnel attending to them. A shortage of supplies has been threatened for weeks around the country as hospitals are seeing a recent surge in COVID-19 cases. Workers at the hospital stated that although they work alongside the Ministry of Health, the necessary supplies are back-ordered and will not be in at least for another week.

ECUADOR: Less than half of the country’s beaches will be reopening this week to receive tourists, as the country emerges from five months of lockdown. Although authorities have approved opening all beaches during Ecuador’s Phase 1 of reopening, leaders are hesitating to open 26 beaches due to possible COVID-19 infections in their respective areas. Local restaurants are also expected to reopen around the same time. Ecuador has been one of the hardest hit countries in the region during the pandemic, and currently has more than 87,000 coronavirus cases and more than 5,700 deaths.

HAITI: School reopenings are proving to be more difficult than expected for both health and teaching professionals. The Ministry of Education announced this week that no more than 30 students will be allowed per classroom. Schools with larger groups of students are expected to teach children on a rotating basis to attempt to limit the number of people. Some students will have the option to attend school either in the morning or the afternoon. Many students have had difficulties learning virtually due to unstable internet connections or a lack of necessary resources to take online classes. Haiti currently has more than 7,300 coronavirus cases.

PUERTO RICO-UNITED STATES: Puerto Rican representatives pleaded with U.S. Congress members to limit travel to the island from areas in the United States with high numbers of coronavirus cases. Governor Wanda Vázquez originally asked the Congressional subcommittee to stop all flights to Puerto Rico from the U.S. in April, a request which was denied in late May. The new petition to Congress to limit flights places an emphasis on people coming from Florida and Texas, two recent hotspots of the virus. The request is pending as Puerto Rico sees a surge in coronavirus cases in part due to tourism.

EL SALVADOR: An explosion at a sewage plant in Cuscatlán may leave more than 100,000 people without running water for the coming days. No workers were injured during the explosion, but repairs to the plant are expected to take 48 hours. Power service near the plant has also been restricted while firefighters and sewage workers attempt to fix the transporters that were destroyed during the incident and other damage. Officials will attempt to provide families affected by the explosion with water using tank trucks.

HONDURAS: More than 60 healthcare workers at Leonardo Martínez Hospital have gone on strike to demand better wages and more equipment to treat COVID-19 patients. Because of the strike, the hospital currently has almost no personnel to care for coronavirus patients. Some workers are owed more than three months of back pay, including nurses who have been under contract with the hospital for more than 10 years. The workers are demanding that they be paid every 30 days as promised by the government before they return to work. Honduras currently has more than 43,000 positive cases and more than 1,300 deaths.

MEXICO: Former National Guard directors and members have been “relieved of their duties” due to alleged ties to García Luna, the former Secretary of Public Security. Luna is facing trial in the United States due to charges of drug trafficking and providing false statements to the police. He has been detained since December 2019 and faces a minimum sentence of 20 years in prison. Luna asked a federal judge yesterday to dismiss new accusations against him regarding criminal enterprise. U.S. prosecutors have also recently placed charges against high-ranking security officials for allegedly accepting bribes from drug traffickers.

UNITED STATES: Activist groups made an appeal to the Senate on Tuesday to pass the DREAM Act, which would provide Deferred Action for Childhood Arrivals recipients with a pathway to citizenship. DACA recipients have long been known as Dreamers after the DREAM Act was introduced but never passed. The measure would also affect millions of other immigrants given temporary status, including recipients of the Temporary Protective Status program. The appeal comes shortly after the Trump administration announced they would not be accepting new DACA applications, despite the Supreme Court ruling to preserve the program in June.