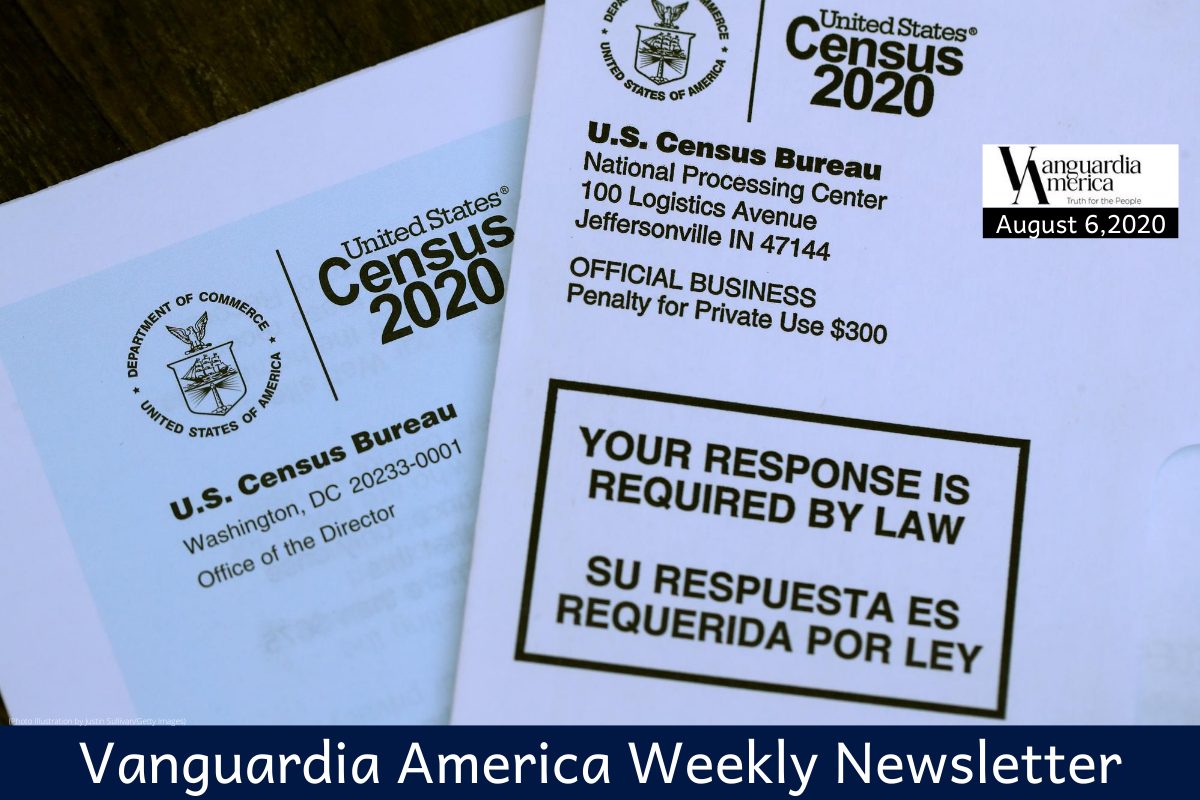 Rolling back the deadline to complete the U.S. census will lead to an undercount, limiting funding for federal programs and stymying Latino voter representation, especially in communities of color, said Arturo Vargas, executive director of the National Association of Latino Elected and Appointed Officials, in a statement.

After first extending the deadline in response to the pandemic, the Trump administration now says the Census Bureau will stop collecting data next month and implement what Politico calls a “constitutionally questionable order to exclude undocumented immigrants for the purpose of congressional apportionment.”

Federal funding for everything from education, health care and food assistance programs to the maintenance of highways and national parks is based on an accurate headcount of the country’s increasingly diverse population. The decennial headcount also shapes the apportionment of state legislative and U.S. House districts across the country.

On Tuesday, Vargas described the latest deadline revision as part of a “political hijacking of the census” and urged Congress to block the move by passing the House version of the latest coronavirus economic relief bill.

“The Senate COVID-19 stimulus bill should follow the House’s HEROES Act (H.R. 6800),” he added, which extends the deadlines to collect the census data and as when final numbers need to be delivered to the White House.

If an undercount occurs, Vargas said, “The groups most likely to be excluded from the census now are historically undercounted populations, including Latinos, African Americans, Native Americans, rural populations, low-income households, and children.”

“There’s an intentional attempt here to basically steal the census—to politicize this census to gain Republican seats across the country,” Julie Menin, the census director for New York City, told the New York Times, a charge Republican leaders and the White House have rejected.

Even as Latinos predict they could help “turn Arizona blue” in November by helping elect a slew of Democratic candidates, one of the state’s most infamous politicians is running neck and neck in a primary race to get his old job back.

Based on early results in Tuesday’s Republican primary election, Ex-Maricopa County Sheriff Joe Arpaio is basically tied for the lead in the race with his former deputy chief, Jerry Sheridan.

Arpaio was ousted in 2016 by Paul Penzone, who is running unopposed in this year’s Democratic primary.

A federal judge ruled in 2013 that the Maricopa County Sheriff’s Office, under Arpaio’s direction, had racially profiled Latinos when making arrests during a wave of traffic checkpoints and workplace raids. The judge later ordered major reforms at the department. (Sheridan worked for Arpaio at the time.)

In 2017, Arpaio, after he ignored the judge’s orders, was convicted of criminal contempt of court. President Trump pardoned him before he could be sentenced.

Immigrants rights activists across the nation widely regard Arpaio as blatantly racist and virulently anti-immigrant. Arpai0 insists he is not racist, even once telling a Univision reporter he couldn’t be racist because he has “Latin blood.” Arpaio is of Italian descent.

If re-elected, Arpaio, who has endorsed Trump for reelection, is pledging “to continue everything I did in the past…”

A new documentary film by director Charlie Minn explores what experts have described as the worst hate crime against Latinos in modern history.

Monday marked the first anniversary of the mass shooting that left 23 people dead and 23 others wounded at an El Paso, Texas Wal-Mart.

Patrick Crusius, the alleged killer, told police after his arrest that he had driven more than 10 hours from his home near Dallas to target “Mexicans” in El Paso. In an online screed posted before the shooting, Crusius lambasted an “invasion” by Mexican immigrants. Most of those who died in the shooting were Mexican citizens or U.S.-born Latinos.

In an online discussion about white supremacy hosted by the League of United Latin American Citizens (LULAC) this week, Bauer noted that a mass shooting in 2018 at a Pittsburgh synagogue was also motivated by hate against immigrants. Shortly before the shooting, the Tree of Life Congregation hosted a gathering welcoming refugees, including Latinos, who were resettling in the community.

“I don’t know what people are going to think about this [film]. This is the most brutal honest look on what happened August 3, 2019,” Minn told ABC-7 in El Paso after a local screening of the film.

“Unless we start a serious, compelling dialogue, Hispanics will continue to be targeted,” said Minn, who lives in El Paso and also produced a film about the 2016 mass shooting at the Pulse Nightclub in Orlando.

“In El Paso’s case, we just can’t put on a T-shirt that says ‘El Paso Strong.’ We can’t just say that. We need a movement [comparable to Black Lives Matter]” that protests hate crimes aimed at Latinos.

Minn’s film is slated to open in theaters in October.