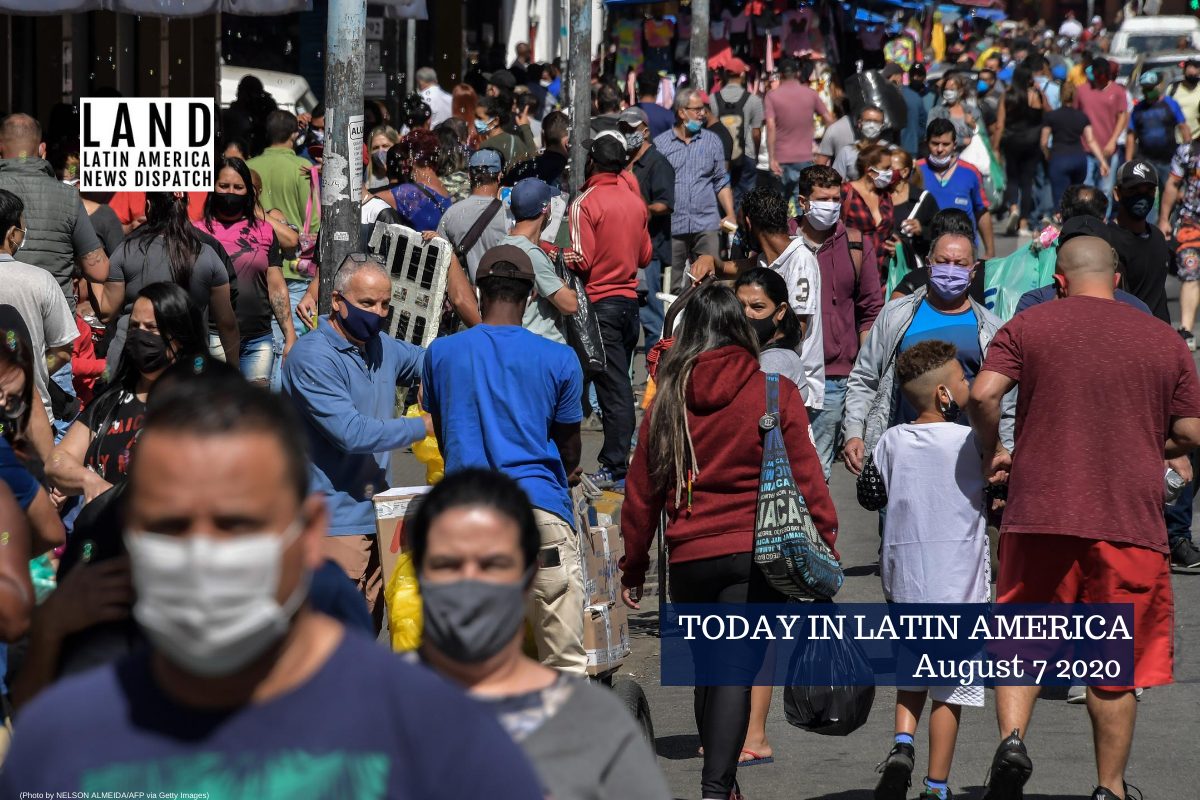 People walk along a commercial street, in downtown Sao Paulo, Brazil on August 4, 2020, amid the new coronavirus pandemic. (Photo by NELSON ALMEIDA/AFP via Getty Images)

REGION: Latin America now has the highest coronavirus death toll in the world, surpassing Europe, according to a Reuters tally.  As of Thursday, there have been a total of 212,000 deaths, according to the World Health Organization. The region now has more than 5 million cases of the coronavirus. Brazil’s death toll is currently the highest at 98,493, Mexico follows with 50,517 deaths.

While Europe was hit early by the pandemic, Latin America has struggled to contain the spread of the virus despite long-lasting lockdowns in many countries.  Some countries are reaching their peaks in cases, and under-counting is widespread throughout the region, so the total will continue to rise. Several countries, including Argentina, Colombia, Peru and Bolivia, have seen recent surges in cases due to collapsing healthcare systems and rushed attempts at reopening economies.

BRAZIL: A top researcher at the Oswaldo Cruz “Fiocruz” Foundation was arrested for allegedly misusing health resources and creating false contracts. The researcher, Guilherme Franco Netto, is considered a vital and respected figure among sustainability and health experts. Netto worked as a consultant for the Pan American Health Organization for years before conducting research in Brazil on the dangers of mining and other similar projects. Fiocruz announced that it would conduct an internal investigation into the matter.

BOLIVIA: Blockades in the city of Cochabamba protesting the delayed presidential election have restricted the movement of medical supplies into the city. Sections of the blockade recently came to an agreement with federal officials to allow the passage of health resources into the city in a limited capacity. Blockade leaders have ordered that health professionals and medical vehicles be allowed in and out of the city without harm. Bolivia is currently facing a widespread outbreak of coronavirus, with large cities such as Cochabamba the most affected. The country reached a total of 86,423 cases and 3,465 deaths yesterday, Bolivia’s Independence Day.

PERU: A Congressional committee approved a bill which will allow for individuals to withdraw up to 100% of their pension funds in an effort to provide economic relief during the pandemic. Similar measures have been introduced and passed in other Latin American countries. Peruvians will be able to disperse specific amounts of money after submitting applications for the program. Individuals will have the option of doing so either in person or online. The legislative body will discuss the new measure during the next full session of Congress.

HAITI: Drastic changes to Haiti’s outdated criminal laws have provoked numerous protests around the country since July. The changes include a new penal code addressing the legalization of abortion, cyber crimes, discrimination based on sexual orientation, and sexual harassment. More than 135,000 Haitians have signed a petition demanding that the President retract the executive order that introduced the changes back in late June. Hundreds of Haitians led by church leaders have participated in demonstrations protesting the sections of the code protecting LGBT rights.

PUERTO RICO: A 4.8 magnitude earthquake was recorded on Thursday in the south section of the island. Five other tremors were also recorded ranging between 2.8 and 4.8 magnitudes. No tsunami warnings have been announced as of yet. Several buildings in the city of Ponce were reported damaged due to the natural disaster. Puerto Rico has consistently experienced earthquakes since January 2020, when an 6.4 magnitude quake caused severe damage and injuries.

BELIZE: The south-side of Belize City will remain in lockdown for two more months. The state of emergency and lockdown of the city was introduced after officials recorded a drastic rise in criminal activity. Some Congressmen warned that police officers should not disregard human rights as the city granted them with extended powers to enforce strict quarantine and social distancing measures. The new expiration date for the lockdown is now October 6.

EL SALVADOR: The Association of Journalists in El Salvador expressed growing concern over a series of government attacks against media workers since 2017. APES warned that recent criticism of the media leans towards dangerous populist agendas. President Nayib Bukele criticized the media earlier this week for reporting on expired food packages meant for pandemic relief that were left in storage warehouses. The government’s leniency towards journalism that praises politicians rather than criticize violates the “economic sustainability” of the media, the president of APES said in a statement. APES urged that access to information must be respected, especially during a global pandemic.

MEXICO: The state of Oaxaca banned the sale of junk food and sugary drinks to children in an effort to address rising levels of obesity and diabetes. The legislation was introduced last year, and a campaigning to pass it increased this year as the pandemic took its toll. Mexicans consume the most soft drinks per person in the world, and lawmakers have attempted to combat the public health consequences of high sugar and processed food consumption for years. The governor of Tabasco announced that he will also be introducing similar legislation prohibiting the sale of unhealthy products to minors.