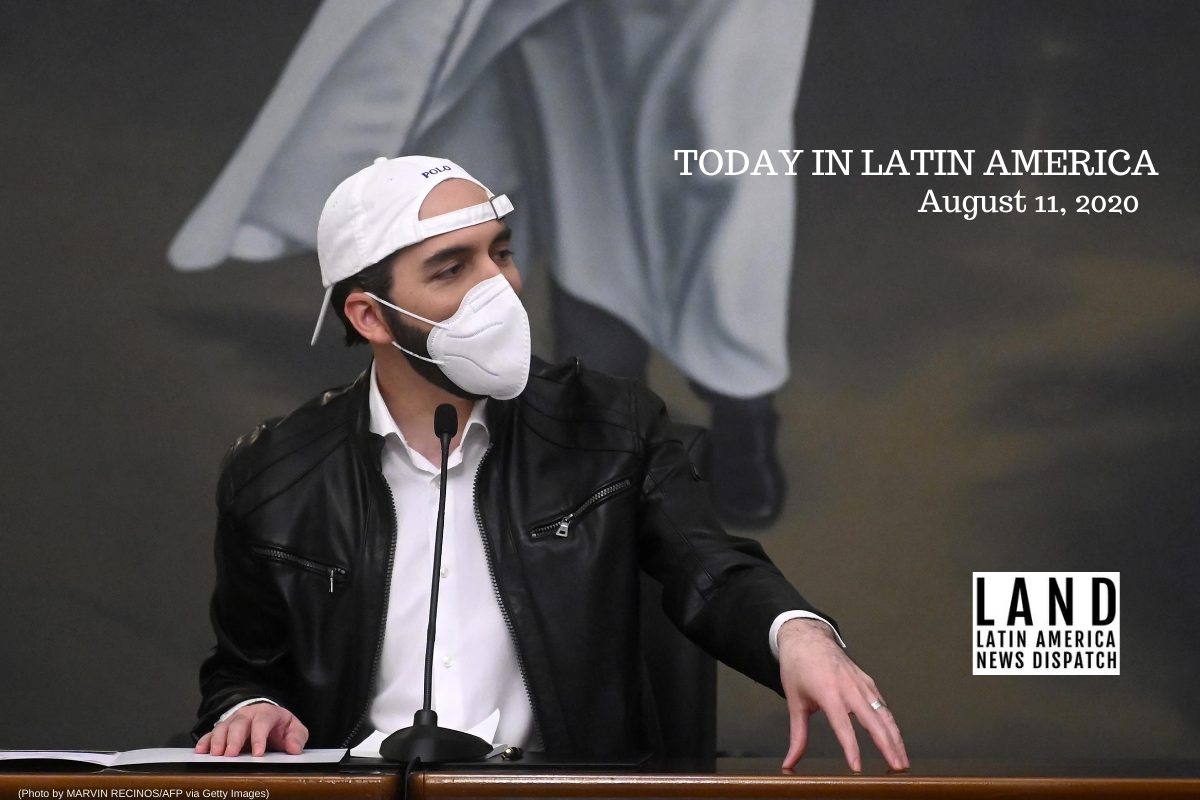 El Salvador's President Nayib Bukele speaks during a meeting at the presidential palace in San Salvador on May 22, 2020. (Photo by Marvin Recinos/AFP via Getty Images)

EL SALVADOR: President Nayib Bukele defended himself after El Salvador’s Supreme Court declared his reopening plan unconstitutional last week, giving him two weeks to work with Congress to revise it. If they fail to come to an agreement, businesses will decide on their own when to reopen. In a televised speech yesterday, Bukele questioned the ruling, saying, “If I were a dictator, I would’ve shot them all. You save 1,000 lives in exchange for five.”

The Salvadoran president imposed one of the strictest lockdowns in Latin America during the pandemic, closing the borders, jailing those who broke quarantine, and declaring a state of emergency without approval from Congress. The courts repeatedly said the severe restrictions on movement were unconstitutional.

El Salvador has yet to enter the second phase of reopening after it was postponed twice due to rising COVID-19 cases. Congress has called on Bukele to work with them on a new reopening plan, but Bukele has not yet responded. El Salvador has reported 563 deaths from the coronavirus and more than 20,000 cases.

BOLIVIA: The prosecutor’s office admitted a complaint of genocide yesterday against former President Evo Morales and 12 others involved in the blockades and protests demanding the presidential election be held September 6. The Ministries of Government and Justice filed the complaint last week. The other defendants include presidential candidates Luis Arce and David Choquehuanca, who are both part of Morales’ Movimiento al Socialismo party, and Carlos Huarachi, the leader of the Bolivian Workers’ Center union. The government says the blockades have prevented the distribution of oxygen and other medical supplies, leading to more deaths from the coronavirus.

COLOMBIA: Several audio recordings implicating former President Álvaro Uribe in witness tampering are part of a Supreme Court investigation into Uribe, according to the Associated Press, who obtained the 1,500-page court document. It includes transcripts of phone calls and WhatsApp audio messages that show Uribe was involved in the search for witnesses who would give positive testimony, including a jailed former paramilitary who was asked to take back a previous claim he made that Uribe had ties to right-wing paramilitaries. Uribe was ordered on house arrest last week as the investigation continues.

ECUADOR: Former President Abdalá Bucaram announced Sunday night that he plans to run for president again in the elections next year. Abdalá and his sons Jacobo, Michel, and Abdalá (Dalo) are currently under investigation for irregularities in the sale of drugs during the coronavirus pandemic. On Saturday, an Israeli citizen, who was detained in Ecuador for his alleged involvement in the scheme, was killed in jail. Bucaram accused President Lenín Moreno of running a “tyrannical government” and targeting his family. Bucaram, who was president from 1996 to 1997, fled to Panama after his term when he was charged with embezzlement. He returned to Ecuador in 2017.

HAITI: Haiti began a partial reopening of its schools yesterday after nearly five months of closure because of the pandemic. Only students who are preparing for critical exams returned to finish the year. Haitian students already missed several months of school last fall during mass anti-government protests. The pandemic has only widened the gap between wealthy and poor students, as some return to schools with stadiums, tennis courts, and sprawling campuses that allow for social distancing and others to schools with no water to wash their hands.

PUERTO RICO: The Supreme Court of Puerto Rico agreed yesterday to hear lawsuits filed by candidates to immediately count all votes that were cast in Sunday’s botched election. The State Elections Commission ordered the ballot boxes sealed after several polling stations did not receive ballots and the primaries were suspended until next Sunday. The lawsuits were filed by candidates for governor Eduardo Bhatia and Carlos “Charlie” Delgado of the Popular Democratic Party and Pedro Pierluisi of the New Progressive Party, as well as a voter who claims her right to vote was violated.

TRINIDAD & TOBAGO: Residents voted in parliamentary elections yesterday as the twin-island nation deals with a pandemic, high crime, a recession, and controversy over migration. More than two-thirds of the population turned up at the polls. Opposition candidates and their supporters raised concerns about the validity of the election before it took place, after the country barred international election observers because of the pandemic. The results will decide who governs the islands for the next five years.

NICARAGUA: A 19-year-old Nicaraguan known for posting videos on TikTok criticizing President Daniel Ortega was released from jail Sunday after an 11-day detention. Kevin Adrián Monzón was arrested by plainclothes police officers outside of a gas station in Managua and investigated for allegedly threatening a Sandinista with a gun. Monzón denies the accusation, and his mother claims his arrest was retaliation because he joined the 2018 protests against Ortega. Monzón has posted more than 30 videos criticizing the Ortega government. One of the first things he did after he was released from detention was upload another video.

MEXICO: COVID-19 cases are still rising in Mexico, but the economy continues to open. Yesterday, Mexico City allowed bars to operate as restaurants —at 30% capacity— to get around the restriction on reopening bars and clubs. Mayor Claudia Sheinbaum, who is isolating at home after being exposed to the coronavirus, insisted that bars are not opening, though reports have surfaced of “symbolic food orders.” Movie theaters, swimming pools and museums in Mexico City were also allowed to open yesterday at 30% capacity. Over the weekend, Mexico passed 50,000 deaths from coronavirus, the second highest toll in Latin America after Brazil.