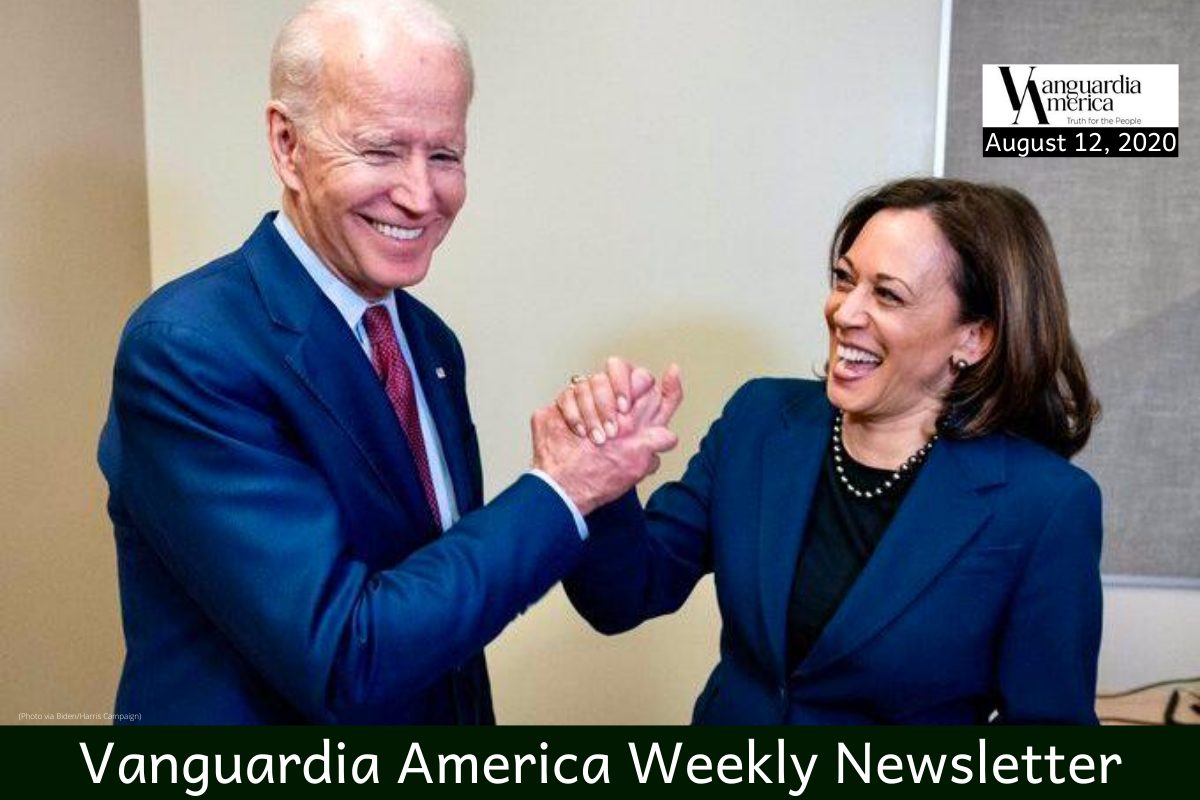 And with that Joe Biden, the presumptive 2020 Democratic presidential nominee, announced via text on Tuesday that U.S. Sen. Kamala Harris, a California Democrat, would become his history-making running mate.

“If she and Biden win the November election,” according to FiveThirtyEight.com, which focuses on political polling and analysis, “[Harris] would be the first Asian American, the first woman of any race or ethnicity and the second Black person in U.S. history to be vice president or president.”

Harris, 55, is the daughter of immigrants: a Jamaican father, Don Harris, who is Black, and Shyamala Gopalan, a Tamil Indian-American. Her parents met as students at Berkeley University. She was born in Oakland, California.

Former Housing Secretary Julián Castro, who ran unsuccessfully against Biden in the race for the Democratic nomination, called Harris, “a talented, dynamic, and groundbreaking leader who will make a fantastic VP.”

A historic announcement! @KamalaHarris is a talented, dynamic, and groundbreaking leader who will make a fantastic VP.

She's already generating excitement among voters and I know she’ll be a fantastic partner to @JoeBiden as we work to defeat Trump and bring our nation together. https://t.co/9Z7SpTX1Y3

Janet Murguia, president and CEO of the Latino advocacy group UnidosUS, said Harris’s selection marked, “A great day for women and a great day for our country.”

Democratic strategist Maria Cardona said, “It’s so crystal clear just how much [Harris] terrifies [Donald Trump] and his team. They have no idea how to come at her, can’t do it, nothing will stick, and anything they try will only highlight their own massive racist, sexist, bigoted, xenophobic shortcomings.”

Dolores Huerta, who co-founded the iconic United Farm Workers of America with Cesar Chavez, applauded Biden’s pick of Harris. “I urge all voters to work their hearts out to elect the Biden-Harris ticket! Sí se Puede!” said Huerta, who turned 90 earlier this year.

I applaud former Vice President @JoeBiden for his historic and wonderful decision in choosing @SenKamalaHarris to be the Vice Presidential nominee for the Democratic ticket! I urge all voters to work their hearts out to elect the Biden – Harris ticket! Sí se Puede!

“The field of women considered [by Biden] was certainly the most diverse array of vice-presidential candidates in history,” according to the New York Times, “beginning with a pool of more than a dozen contenders that included governors, senators, members of the House, a former United Nations ambassador, the mayor of Atlanta and a decorated combat veteran.”

At one point the pool of prospects included at least two Latinas, U.S. Sen. Catherine Cortez Masto of Nevada, and New Mexico Gov. Michelle Lujan Grisham. Masto pulled her name from consideration early in the process. By most accounts, Grisham, who gained praise for her response to the pandemic, was still one of the top 10 potential picks as the process neared its end.

It's time to rebuild our country better than ever before. It’s time to take back the White House. It’s time to elect @JoeBiden & @KamalaHarris. Join us ➡️ https://t.co/5FK6GeK51C

In a press statement, Anais Lopez, an analyst for the national polling firm Latino Decisions, said, “Our recent poll on behalf of Voter Participation Center and Voto Latino found that 59 percent of Latino voters in key battleground states said they would be excited about Harris as VP, and 52 percent say the selection of Harris will make them more likely to vote for Biden.”

Lopez added, “Harris has proven to be a strong contender for Latino voters in the past. As attorney general of California, Harris won a majority of support from Latino voters twice, in 2010 and 2014. She beat [U.S. Rep.] Loretta Sanchez for California’s first open Senate seat in nearly a quarter century in 2016.”

Despite the historically diverse pool of vice-presidential candidates, it became increasingly clear in recent weeks that Biden would select an African American running mate. Five Black women were reportedly on Biden’s shortlist, including Harris and former U.S. Ambassador to the United Nations Susan Rice, who served with Biden in the Obama Administration.

A wave of street protests around the world against police brutality aimed at people of color, especially unarmed Black men in the U.S., almost certainly played a role in Biden’s decision to select Harris. The videotaped killing of George Floyd, a part-time security guard in Minneapolis, sparked global demands for social justice and the largest civil rights demonstrations in U.S. history.

Black voters also helped revive Biden’s candidacy during the primaries when many believed his chance at winning the Democratic presidential nomination had all but faded. A key endorsement by Congressman Jim Clyburn, who is Black, ahead of the South Carolina primary is widely credited with having solidified African American support for Biden, especially among Black women.

While Clyburn and other top Democrats predict Harris’s pick will go a long way toward boosting his backing with most Black voters nationwide, it’s not as clear how Latino voters will respond.

She's got a strong record fighting for Latinos in California, including farmworkers that have been left behind by Trump. https://t.co/rcDCv78M5H

Writing on Twitter, Sawyer Hackett, a senior advisor to Julian Castro, said Harris has “a strong record fighting for Latinos in California, including farmworkers that have been left behind by Trump …  [Harris] will help excite Latino voters heading into November.”

Musing aloud about how Democratic progressives will react to Harris’ selection, Hackett added, “Maybe it’s just my feed but I haven’t seen a single progressive leader denounce today’s announcement as we were told they would.”

Until his withdrawal from the race in April, Biden’s main rival in the primaries was U.S. Sen. Bernie Sanders, a self-described Democratic Socialist. Among his best-known supporters is Congresswoman Alexandria Ocasio-Cortez, D-NY.

As Biden struggled to gain traction among Hispanics, especially among young voters in the early months of the campaign, most Latinos in Iowa and Nevada sided with Sanders.

As the campaign continued, “Latino voters were credited with keeping Sanders’ campaign alive after Joe Biden surged back on Super Tuesday, boosted by a win in South Carolina days earlier,” according to Laura Barrón-López of Politico. “Sanders won a majority of Latino voters in California and staved off Biden for a victory in the state. Sanders won a plurality of Latinos in Texas but lost the state on Super Tuesday.”

Chuck Rocha, a senior advisor to Sanders who’s regarded as the mastermind behind the candidate’s successful Latino voter turnout efforts, offered a strong endorsement Tuesday of the Biden-Harris ticket: “No one candidate is perfect,” he wrote on Twitter. “It’s our job as voters to hold all politicians accountable on the issues we care about. #BidenHarris2020 may not be the perfect ticket for some, but it’s damn good … #DefeatTrump.”

Take it from the old Strategist, No one candidate is perfect. Its our jobs as voters to hold all politicians accountable on the issues we care about. #BidenHarris2020 may not be the prefect ticket for some, but its damn good. Don't let perfect be the enemy of good. #DefeatTrump

An estimated 14.6 million Latinos are expected to cast a ballot in November, a 15 percent jump from the 2016 race when Trump defeated Hillary Clinton, according to the National Association of Latino Elected and Appointed Officials (NALEO).

With almost two-thirds of Latino voters identifying themselves as Democrats, Lopez of Latino Decisions predicted, “Biden is positioned to receive a significant boost among Latinos by selecting Harris, which could mobilize this important base in the election against Donald Trump.”

While a Latina may not be headed to the White House in 2020, political observers say Harris’ pick opens the door for California Gov. Gavin Newsom to consider appointing a Hispanic to fill her seat in the U.S. Senate. California is 40 percent Latino, making it the largest bloc of voters of color in the state. African Americans are 6.5 percent of the state’s population.

Republican political consultant Mike Madrid told Calmatters.com, “I would be shocked if it were not a Latino or Latina” that Newsom picked to replace Harris.

Meanwhile, Latinos for Trump posted this about Biden’s pick for VP on the group’s Facebook page: “With Harris as Joe Biden’s ‘political living will,’ he is surrendering control of our nation to the radical mob with promises to raise taxes, cut police funding, kill energy jobs and open our borders.”

For Trump’s part, soon after learning Harris had been selected, the president called her “nasty,” recognized as his insult of choice when describing strong-willed women, especially women of color.

Biden and Harris are scheduled to appear together and deliver remarks this afternoon in Delaware.