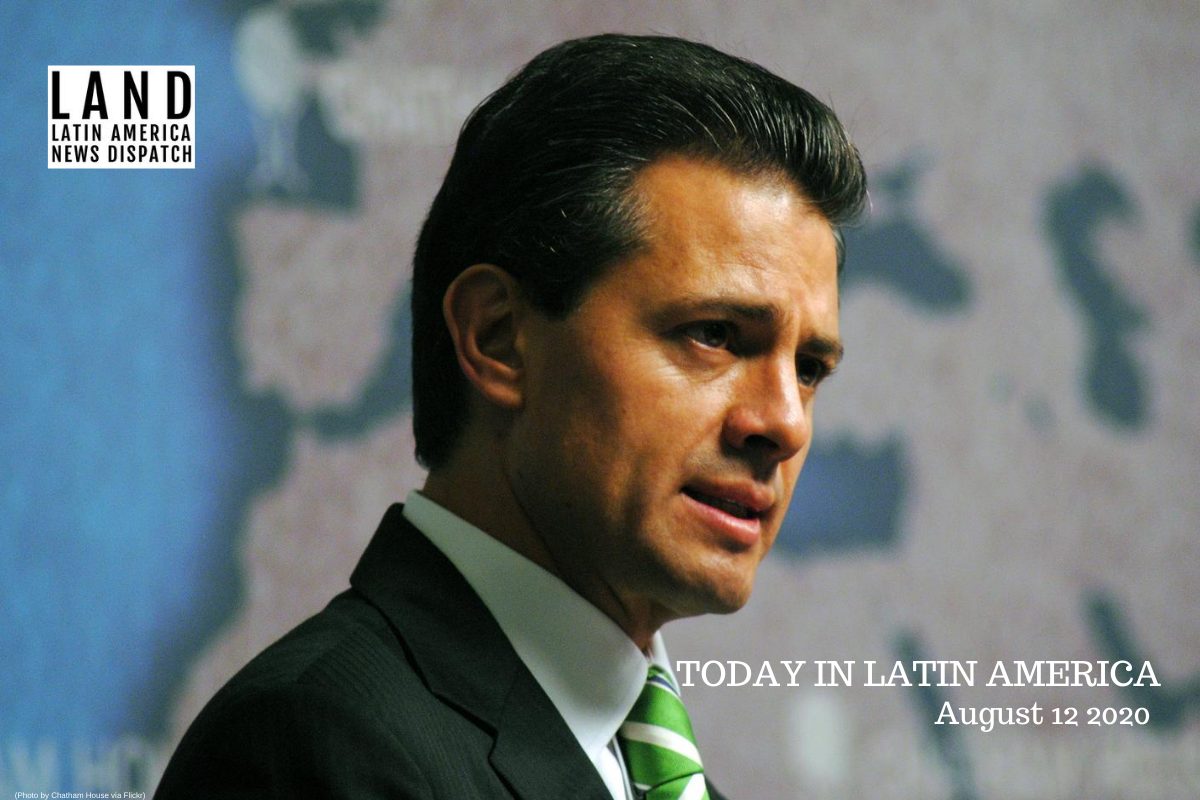 Lozoya was extradited from Spain last month and is also under investigation for corruption. He accused Peña Nieto and former Finance Secretary Luis Videgaray of paying more than $4 million in bribes from Odebrecht to campaign consultants. Lozoya also said that Peña Nieto spent more than $5 million to “buy votes” from legislators to approve certain measures, such as his energy reform bill.

Lozoya’s arrest earlier this year marked a victory for President Andrés Manuel López Obrador, a long-time critic of Peña Nieto’s party, the PRI, who vowed to crackdown on corruption. Lozoya is under investigation for the irregular purchase of a fertilizer company. Before he was extradited, he promised to discuss what happened with Odebrecht and the fertilizer company.

ARGENTINA: Mauricio Claver-Carone, the U.S. government’s pick to head the Inter-American Development Bank (IDB), accused Argentina yesterday of trying to “subvert” the election process. Argentina is among a growing number of countries opposed to Claver-Carone taking the position. If Claver-Carone is elected, he would be the first president of the IDB who is not Latin American. The election is scheduled for next month, but several governments have asked that it be delayed until next year because of the coronavirus pandemic, which would hurt Claver-Carone’s chances of winning.

CHILE: The daughter of former President Michelle Bachelet was arrested yesterday in Santiago after protesting in support of detained Mapuche Indigenous people. Francisca Dávalos was allegedly participating in a demonstration outside of the Civil Registry and handing out fliers. The Mapuche have been fighting against police violence and the exploitation of their lands. One of the prisoners, Celestino Cordova, has been on a hunger strike for 100 days, demanding the government open a dialogue with the Mapuche about the violence.

BOLIVIA: On Monday, the government of Jeanine Áñez ordered the military and police to guard public institutions and vital infrastructure, such as airports, following a week of protests and roadblocks set up to demand that the presidential election not be further delayed. In Cochabamba, 135 police officers were dispatched, along with the Armed Forces, to “reinforce patrols.” Minister of Government Arturo Murillo said the administration is trying to “avoid a civil war,” but  escalating tensions has left some people worried that the violence following the 2019 election will return.

VENEZUELA: The European Union said that it will not send observers to Venezuela for the National Assembly election in December. In a statement, EU foreign policy chief Josep Borrell said that “conditions are not met, at this stage, for a transparent, inclusive, free and fair electoral process.” Last week, a coalition of opposition parties also said they would not participate in the election, likening it to “collaborating with the dictatorship’s strategy.” The National Assembly, headed by Juan Guaidó, is the only branch of the government that opposes President Nicolás Maduro, and his opponents fear the election would fraudulently return the legislative body to Maduro’s control.

PUERTO RICO: Gov. Wanda Vázquez Garced sued Puerto Rico’s elections commission yesterday and demanded a re-do of Sunday’s election at all polling stations that opened late. The lawsuit also aims to stop the release of results from cast ballots. Voters at almost half of the island’s polling stations were unable to vote because of missing ballots or other issues. Election officials agreed to hold a second election this coming Sunday, despite calls from the Popular Democratic Party to hold the election tomorrow and declare the day a holiday. The Fiscal Oversight Board approved $1.27 million yesterday to finish the election.

TRINIDAD & TOBAGO: The ruling People’s National Movement party claimed victory in Monday’s parliamentary elections, winning 22 out of 41 seats, but the opposition United National Congress party has demanded a re-count. In a victory speech, Prime Minister Keith Rowley warned that the next two years will be difficult as Trinidad and Tobago struggle with high debt and unemployment, the fallout from the pandemic, and a collapse in oil prices.

GUATEMALA: A French aid worker was shot to death while driving in San Antonio Ilotenango on Monday. At least 11 bullets were fired into his car. Authorities do not know who shot Benoît Maria or the motive. Maria was part of the organization Veterinarians Without Borders and was known for helping with agricultural projects in Indigenous Mayan communities.

French President Emmanuel Macron expressed his condolences for Maria on Twitter and called the killers cowards.

UNITED STATES: Hospitals and immigrant advocacy groups criticized President Donald Trump yesterday after he said he was considering not allowing U.S. citizens and legal permanent residents to return to the United States from Mexico if there is reason to believe they have the coronavirus. In recent months, the Trump administration has banned foreigners from entering the United States because of the pandemic, but this new rule would extend the ban to citizens and permanent residents. Legal experts say it would be difficult for the administration to justify restricting citizens in this way.