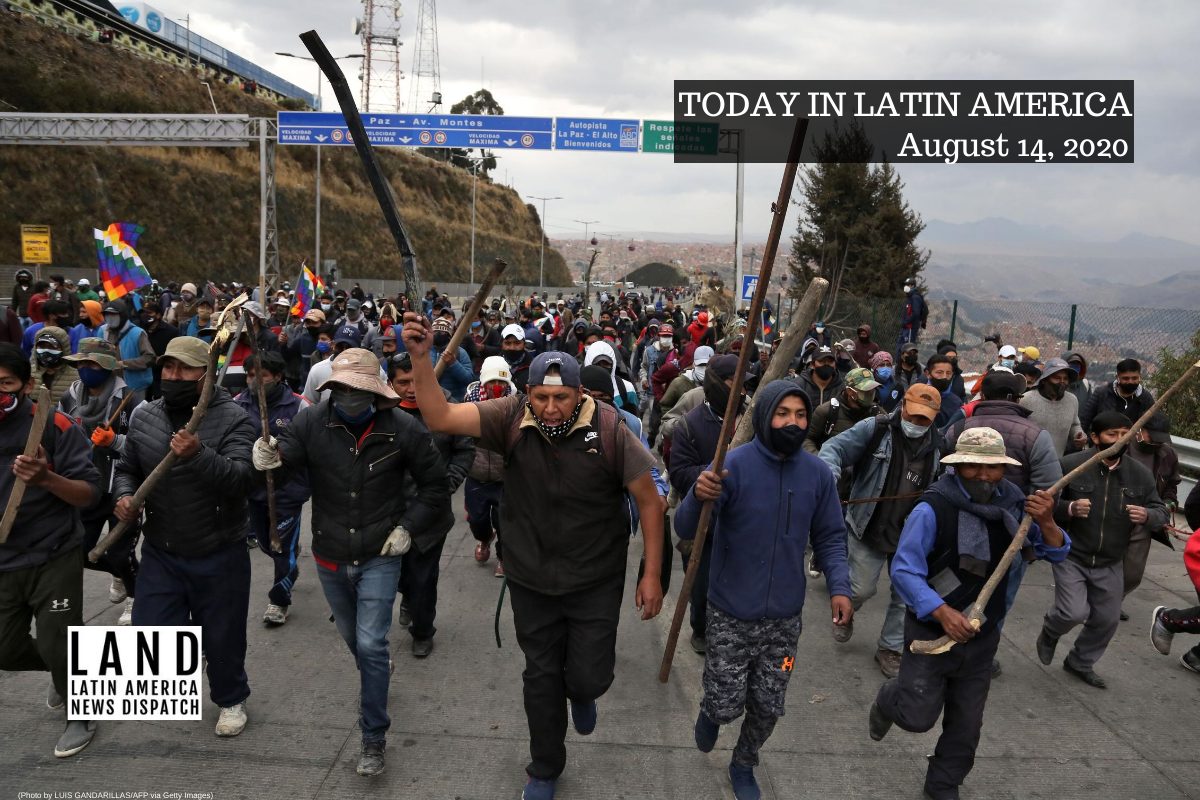 Supporters of Bolivian former president (2006-2019) Evo Morales block the highway between La Paz and El Alto to protest against a second postponement of the general election. (Photo by LUIS GANDARILLAS/AFP via Getty Images)

BOLIVIA: Nearly two weeks of protests against the delay of presidential elections by interim president Jeanine Áñez have escalated in recent days. Several blockades have been in standoffs against police and military since Monday. The administration says that the blockades have prevented hospitals from receiving medical supplies but protestors refute the claims. Thousands of union members, coca farmers, Indigenous activists, and miners have taken to the streets.

Oxygen supplies are low nationwide, impacting ICU and COVID-19 patients. Bolivia’s healthcare system has long been overwhelmed and underfunded, but the pandemic has put unprecedented strain on it. United Nations officials are pleading with Bolivian officials to reach a solution to the conflict so that ambulances and medical supplies can safely go in and out of major cities. Bolivia currently has more than 96,000 coronavirus cases and more than 3,800 deaths.

The administration says that it too dangerous to have in-person elections. Áñez approved the law after Congress passed it on Thursday, setting the new election date for October 18. The interim leader at first hesitated in sending police and military forces to stop the blockades after hundreds were injured and more than 36 people killed during the protests following last year’s election.

BRAZIL: Government funds reserved for state and federal works projects will now be redistributed to combat COVID-19. Approximately R $8.6 billion ($1.6 billion) worth of funds that have not been allocated to infrastructure projects will be used to combat the “social and economic consequences” of the pandemic. President Jair Bolsonaro’s administration must wait for approval from the Ministry of Regional Development. How exactly the funds will be spent has not been announced. Brazil currently has more than 3.2 million coronavirus cases and more than 105,000 deaths.

ECUADOR: A new investigation reveals that several doctors have not worked in hospitals during the pandemic, and instead have been receiving patients in private offices. Many of the healthcare officials said that they have underlying health conditions which did not allow them to work in close quarters, then proceeded to receive medical certificates at private practices. The city of Guayaquil reported that nearly 60% of healthcare professionals were absent from hospital workplaces at the height of the pandemic. Officials are currently investigating which doctors are involved.

VENEZUELA: Communications Minister Jorge Rodríguez tested positive for coronavirus earlier this week. Rodríguez, a close advisor to president Nicolás Maduro, confirmed on Twitter that he would stay in isolation for two weeks. Rodríguez is known for monitoring press conferences for Maduro and regularly speaks on the president’s behalf. The news comes after Dario Vivas, the governor of Caracas and another close ally of Maduro, passed away due to the coronavirus. Venezuela currently has more than 30,000 COVID-19 cases.

PUERTO RICO: After the Supreme Court ruled that a second round of primary elections must be held this weekend, Puerto Ricans are preparing to once again vote. Last week, several polling places reported delayed or missing ballots, leaving hundreds of voters waiting in hours long lines. Some voters reported having to return to their polling place multiple times only for it to be closed for most of the required eight hours. Other polling places reported only receiving ballots for one political party. Several trucks carrying voting machines also did not deliver the necessary materials until the day of the election. A federal board will now execute $1.27 million to oversee the upcoming second round of voting.

HONDURAS: Hundreds of businesses are expected to be fined by the government for inflating prices of common goods during the pandemic, according to the Ministry of Economic Development. A statement from officials said that while most businesses seemed to be in compliance with regulations that froze prices of certain goods, a total of 280 businesses were not. Some convenience stores have also reportedly attempted to sell expired goods.

NICARAGUA: Public schools are facing numerous challenges as children have now been back in classes for nearly a month. Several institutions have reported a lack of soap and water to stay safe during the pandemic. Attendance in schools has been relatively low, as some parents have chosen not to send their children back. Teachers who attempt to speak out against the dangerous conditions fear retribution. Some have reported students no longer wearing masks or washing their hands due to a lack of supplies. Several teachers have also tested positive for coronavirus in recent weeks.

BORDER: Mexico will keep its side of the U.S.-Mexico border closed for another month after a rise in cases in both countries. Travel over the border has been restricted since the beginning of the pandemic in March, and movement between the two countries is limited to essential reasons. The current closure was extended to August 21 last month, meaning the border will now remain closed until at least September 21.

MEXICO: The total number of COVID-19 cases has now surpassed 500,000, according to the Ministry of Health. During a daily conference, officials confirmed that although the number of cases is rising, a decrease in the spread of the virus can also be seen in national data. Officials also stated that the number of available hospital beds for coronavirus patients is slowly increasing. The news comes as some movie theaters in Mexico City reopened this week to small crowds.

One thought on “Protests Of Election Delay In Bolivia Escalate”