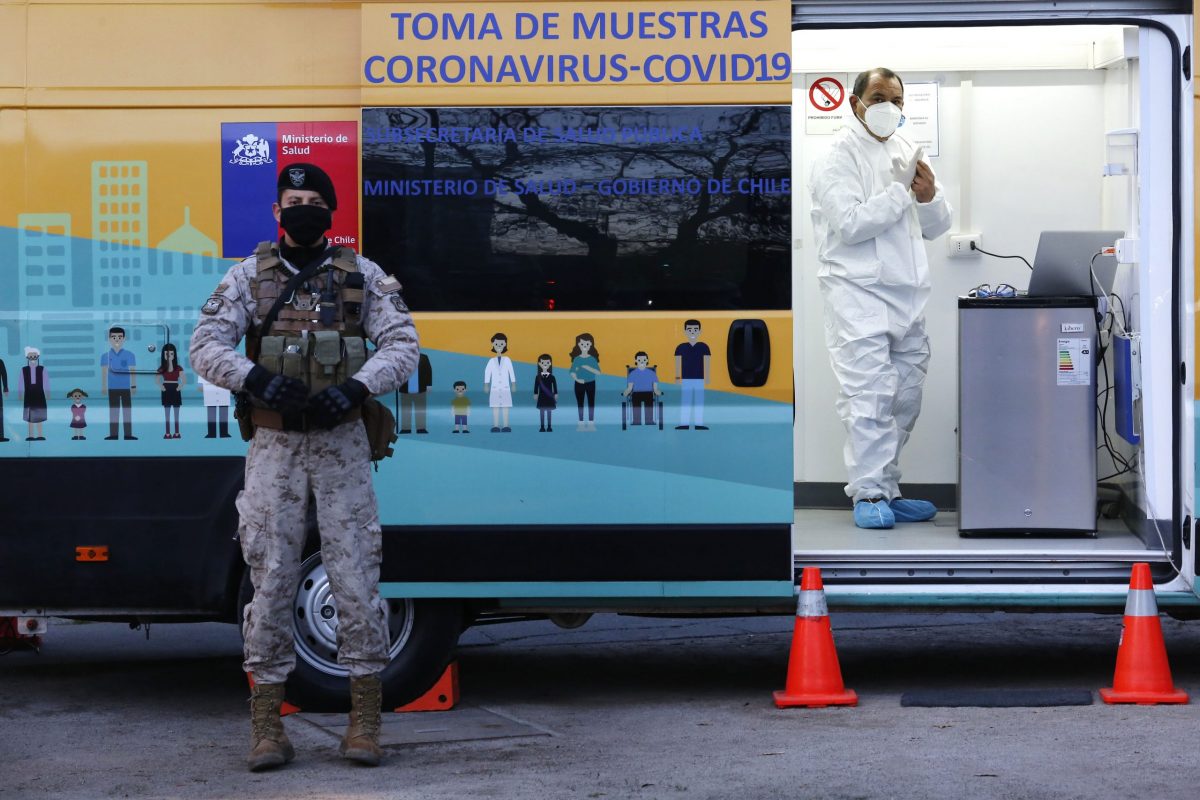 A Chilean military stands guard next to a truck were medical personnel tests for COVID-19 during the first day of 'new normal' after total lockdown in the Santiago Centro area on August 17, 2020 in Santiago, Chile. (Photo by Marcelo Hernandez/Getty Images)

Latin America is now the epicenter of the COVID-19 pandemic. The fastest spread of the disease in the region’s cities follows a pattern of contagion that is anything but arbitrary. Disturbing images in international media depict the unfolding crisis, from disinfection campaigns in the favelas of Rio de Janeiro, Brazil, to stockpiles of cardboard coffins in Guayaquil, Ecuador.

By this week, about 30% of the world’s reported cases were in the region. But some centers have been much worse hit than others.

Two factors underpin these variations: levels of inequality, and the ways governments and communities are handling the crisis.

Across the region’s largest cities, the first cases had appeared by early March in well-off neighborhoods. Not until May were exponential rates of infection recorded in most Latin American countries. The surge in cases reflected the spread of coronavirus across cities and into their poorest neighborhoods.

The Poor Are More Vulnerable

Many of the urban poor have not been able to manage risk in the way that the better-off do. To make ends meet they often travel long distances in public transport to work in wealthier neighborhoods. Those who have jobs are often employed in the informal economy: cleaning houses, fixing electrical problems, selling vegetables and so on.

By June 2020, infection rates were increasing in many middle-class neighborhoods too—for example, in Buenos Aires. However, self-isolation is a more realistic prospect in these areas. Medical care is also more accessible.

Inequality created ideal conditions for COVID-19 to spread. The disease disproportionately affects residents of informal settlements in the largest cities. One-fifth of the Latin American population lives in such settlements.

As well as their work being insecure, their living conditions add to their vulnerability. Some of the problems faced can include overcrowding, malnutrition, deficient sewer systems, limited (and often paid) access to drinkable water, overwhelmed or unaffordable health services and indoor air pollution from cooking (with open fires or simple stoves, for example).

Given these conditions, COVID-19 is far from a leveling force. It is the latest crisis to reveal old and hard truths about Latin America’s social and economic geography.

The virus has not spread unabated in all Latin American cities. The quality of governance and the preparedness of services have greatly affected outcomes between cities and countries.

Some have paid a high price for the harmful impacts of inconsistent communications by authorities and political leaders, weak public health systems, liberalized employment conditions and lack of support for disadvantaged groups.

Mortality analyses conducted by the Coronavirus Resource Center at John Hopkins University show six of the countries most affected by COVID-19 worldwide are now in Latin America. Brazil, Chile and Peru have reached 50 or more deaths per 100,000 population. Nowhere has it been made clearer how a chronically underfunded public health system leaves behind vulnerable people.

The mortality rate is lower in other parts of the region. In these countries, strict restrictions have been introduced and the public health systems bolstered since the start of the pandemic. Leading examples include Uruguay, with 1.07 deaths per 100,000 people, and Argentina (11.7/100,000).

In June, Time included Argentina’s response in “The Best Global Responses to COVID-19 Pandemic”. In the capital, Buenos Aires, co-ordination between the three levels of government has been strong on public health as well as economic and social protection measures despite political differences. Shared communications have backed strict lockdown measures every fortnight since March 20 (read more about the Buenos Aires experience here).

Bottom-Up Efforts Are Vital Too

It is not just top-down approaches by government that make a difference to local outcomes. The bottom-up work of social organizations in Latin American cities has also been vital.

Many of their actions are also directed toward the state. With an ethic of care, they seek to drive anti-neoliberal change and demonstrate a better urban future centered on people’s real lives and desires.

For example, across the region feminist social movements and politics are dismantling patriarchal perspectives about modern cities. Their collective response to the COVID-19 crisis is a demonstration of solidarity.

Remaking Cities After The Pandemic

Looking forward to the post-pandemic city, there are valuable lessons to be learnt from Latin America.

First, debilitating inequality must be redressed. Poverty has been built into the way cities are developed. But this is now being denaturalized.

Second, coordinated and strong state-led action that made public health the priority has saved lives in cities like Buenos Aires. Bipartisan leadership and collaboration between levels of government can also help us deal with pressing urban challenges in the future.

Third, because of the ubiquitous albeit unequal way coronavirus has affected people across cities, there is potential for a post-pandemic future that focuses on collective well-being.

Many Latin American social organization, and the networks between them, offer hope and direction for the challenge of recovery. Not only do they provide vital support in crisis management, they could play a democratizing role in shaping politics and state responses to redress inequality over the long term.