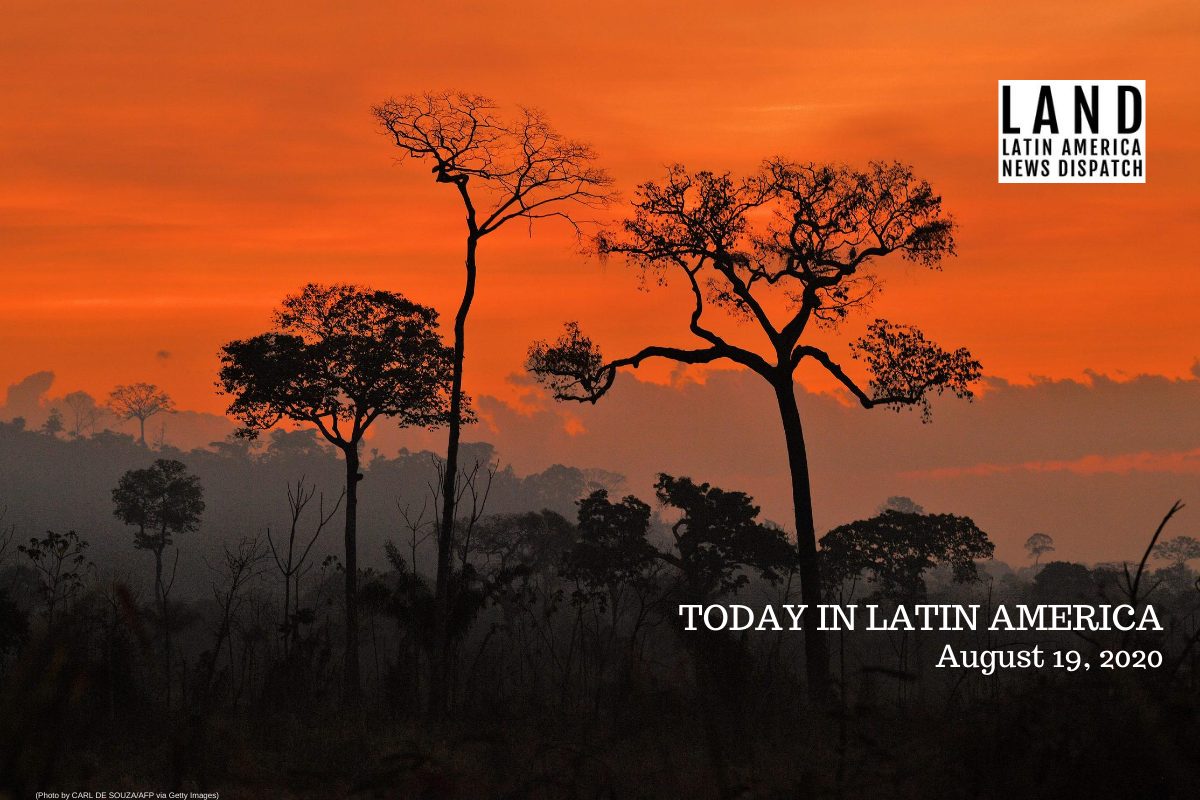 The sun sets as smoke from illegal fires an area of Amazon rainforest lingers, south of Novo Progresso in Para state, Brazil, on August 15, 2020. (Photo by CARL DE SOUZA/AFP via Getty Images)

BRAZIL: Around 19,000 wildfires have been detected in the Amazon rainforest during the month of August, indicating an even more destructive beginning to the season than last year. Some government figures show the number of wildfires increasing by 81% in comparison to the same period in 2019. President Jair Bolsonaro’s government has not made steps towards passing stricter legislation to help stop wildfires from starting and spreading.

Last week, Bolsonaro claimed that reports of high number of Amazon fires were lies. But a task force of army officials attempting to stop and fine those who are starting the fires has not been able to control them. The high number of wildfires last year sparked international outrage, with several world leaders threatening to withdraw funding to Brazil if action was not taken against the disaster.

Police investigations opened into the 2019 fires have yet to find the culprits. The Amazon has already lost more than 17% of its original area, and may collapse in the next 15 to 30 years if more protective measures are not taken soon.

ARGENTINA: Minister of Health Sonia Martorano stated that numerous activities would be prohibited or restricted if the province of Santa Fe were to reverse reopening protocols. The reversal would include closing museums, shopping malls, libraries, artisanal, and religious activities, as well as sports activities, bars, and restaurants. Health officials have warned that another closure may be inevitable if hospitals become too overwhelmed with coronavirus patients. Despite most of the country being on lockdown for more than 150 days, Argentina still has one of the highest infection rates for COVID-19 in the world.

BRAZIL: The city of São Paolo will not reopen schools for in-person learning in September as initially planned. Mayor Bruno Covas stated that sending children back at the moment would be “reckless” given the growing number of coronavirus cases across the country. A survey conducted by City Hall found that more than 64% of students in the region who have contracted the virus are asymptomatic, increasing the chances of infection if schools were to reopen. The city plans on reassessing the situation in October to decide whether or not remote learning will continue. More than 3.4 million Brazilians have been infected with COVID-19 since the beginning of the pandemic.

COLOMBIA: Former President Álvaro Uribe announced his resignation from the Senate in a letter. On Twitter, Uribe wrote that his ordered house arrest eliminates “any expectation” of him returning to his seat in the legislature. Uribe was placed on house arrest by the Supreme Court while he is investigated for fraud and witness tampering. The judicial branch is now expected to look into whether or not the corruption allegations are also connected to his work during his time as a Senator. Uribe has denied all charges and probes against him.

ECUADOR: More than 13 million people registered to vote in the upcoming general elections in February 2021. The deadline to register to be counted by the National Electoral Council was this Tuesday. Voters will be electing a new president and legislators. Electoral campaigns are expected to largely take place on social media platforms in order to maintain social distancing during the pandemic. Candidates are strategizing to reach rural areas with no internet access, and appeal to younger voters on platforms such as TikTok.

DOMINICAN REPUBLIC: Congress is debating a new penal code which could potentially decriminalize abortion under certain circumstances. Religious groups have adamantly stated their opposition to the legislation. Feminist groups have spoken out against the marginalization of women in the country that allows for the criminalization of abortion. The Dominican Republic has one of the strictest abortion bans in the world, in which abortion is illegal even if the life of the mother is in danger. Congresspeople are expected to debate the new code as well as other critical bills for the next 100 days that Congress is in session.

BELIZE: A nationwide curfew has been extended in order to stop the spread of COVID-19 and limit the number of people gathering in public places. Congress voted on the extension as well as on extending the state of emergency for certain parts of Belize City. This is the third time the state of emergency has been reinstated after increased rates of crime occurred during the pandemic. Congress also debated a new labor bill which could potentially leave workers more at risk to abuse from employers. Legislatures plan on reconvening this week to vote on whether or not to pass the bill.

GUATEMALA: The legislative body will be suspending all activities this week after 18 new cases from the legislature were confirmed, including three deputies. In a statement on Twitter, a member of the legislature announced that the suspension was required under law in order to guarantee and protect the right to life. Congress will now meet on August 24, and will discuss the nomination and election of new judicial officials, including for the Supreme Court.

MEXICO: A Category 3 hurricane is expected to brush by the Baja California Peninsula in coming days, with tropical storm winds potentially causing destruction. Hurricane Genevieve will most likely not make landfall in Mexico, but with winds of up to 120 mph, a tropical storm watch has been activated. Genevieve will also bring an increase in moisture and rainfall as the West Coast experiences a record breaking heat wave this week.

MEXICO: The state of Chihuahua is requesting federal aid to help combat a drought that has left most of the region without reliable sources of water since January. The limited amount of water is affecting the agricultural industry, with many livestock struggling to survive. Farmers report cattle and dairy production being especially affected. Food shortages are also expected to cause hunger in communities that rely on farmed goods.