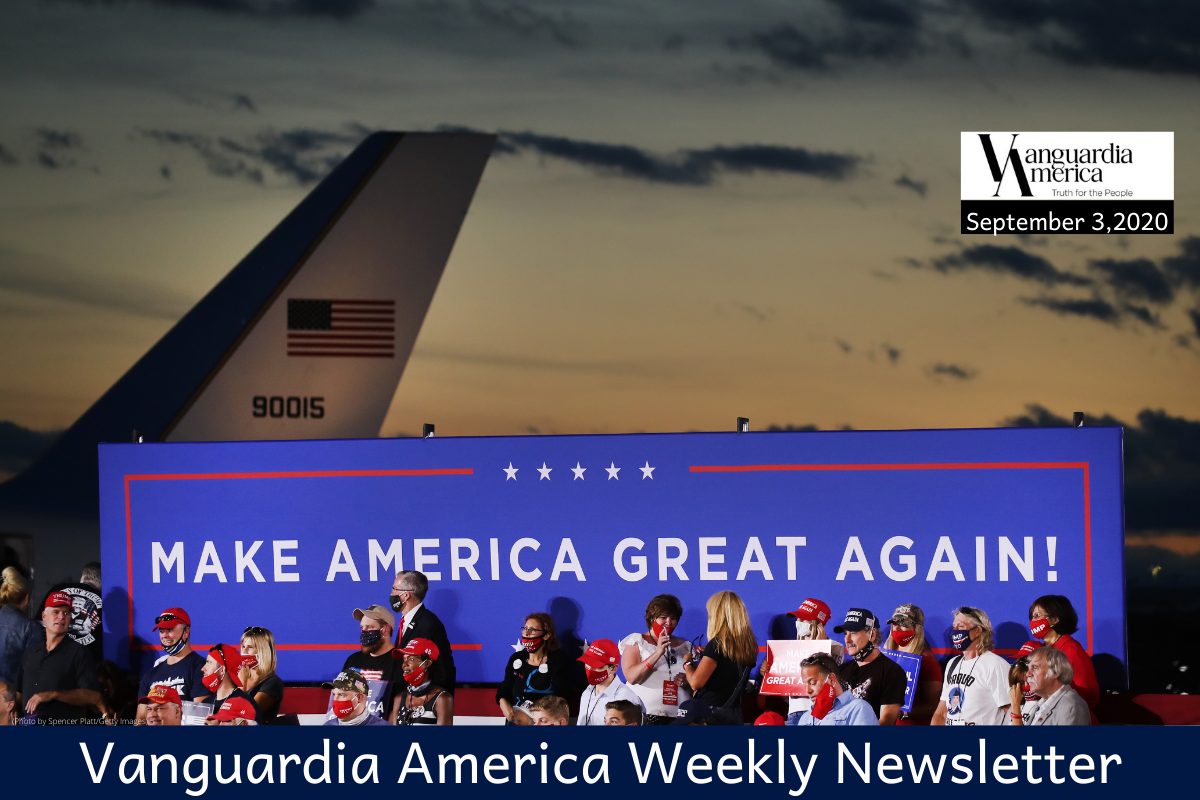 At a press conference on the eve of last week’s Republican National Convention, several of the country’s most influential Latino advocacy organizations charged the GOP with “enabling” President Trump’s white supremacist agenda.

Representatives from UnidosUS Action Fund, Voto Latino, the League of United Latin American Citizens (LULAC) and Mi Familia Vota presented what the groups described as their indictment of the Republican Party.

“Since 2016, the Republican Party has enabled the President’s bigoted and cruel agenda at every step of the way,” said UnidosUS President and CEO Janet Murguía. “As the Administration has tried to rip away health care from hardworking Americans, purposefully subverted the census to undercount Latinos and other people of color, rewarded racists like [former Arizona Sheriff] Joe Arpaio with pardons, called violent white supremacists ‘very fine people,’ torn families apart, and put [immigrant migrant] children in cages.”

Mi Familia Vota CEO and Executive Director Héctor Sánchez Barba said, “Trump needs to stop saying that the election will be rigged just because the demographics of our country are changing. We call on honest GOP leaders to protect our ability to vote and to have those votes counted.”

Despite the groups’ withering criticism, former George W. Bush adviser Karl Rove said Wednesday that polling data suggests Trump could nevertheless draw 1 in 4 Latinos to vote for him in November.

“He has a variety of people in the Latino community who say, ‘He is standing up for us, for law-abiding people who go to church and try and provide for their families. And, he is standing up to keeping us safe,” Rove told Fox News.

As part of its 2020 Latino Election Handbook analyzing the Latino community’s participation in this year’s election, the NALEO Educational Fund estimates 14.6 million Latinos will cast a ballot in November.

The turnout projection marks a 15 percent increase over 2016, and Latino voters will account for about 10 percent of the nation’s total electorate, the group said.

“As the second-largest population in the United States, Latinos continue to grow in both size and political influence, a reality that members of both parties must reckon with if they want to be able to compete to win,” said NALEO Educational Fund CEO Arturo Vargas. “Ultimately, with the emergence of new battleground states with large Latino electorates, engaging Latino voters is as critical as ever.”

A group of civil rights organizations is asking a federal court in Maryland to prevent the Trump administration from ending the 2020 U.S. census count at the end of this month.

At issue is the Trump administration’s decision to rescind its previously announced extension of the census count schedule in response to the COVID-19 pandemic. In August, the U.S. Commerce Department, which oversees the Census Bureau, abruptly abandoned its original COVID-19 plan.

Attorneys for the Mexican American Legal Defense and Educational Fund (MALDEF), Asian Americans Advancing Justice (AAJC) and the WilmerHale law firm say ending the count this month would “diminish the minority count while increasing the white population count.” The practical effect would be to curb federal funding to states and localities with large communities of color while also reducing their political clout.

The groups say the administration’s decision to end the count early “violates the Constitution’s Enumeration Clause, which requires an actual count of all persons living in the United States.”

Based on the current timeline, the Census Bureau cannot meet the Constitution’s mandate. “And that is exactly what the Trump Administration wants, to not count our communities at all,” said John C. Yang, President and Executive Director of Advancing Justice-AAJC.

The parents of a California teenager fatally shot after an encounter with sheriff’s deputies have sued the Los Angeles County Sheriff’s Department.

Andrés Guardado, 18, “was shot five times in the back June 18 while working as a security guard at an auto body shop” in Gardenia, California, according to the Los Angeles Times.

This week, Guardado’s parents, Elisa and Cristobal Guardado, charged in a lawsuit that “two deputies chased Guardado for no reason before [Deputy Miguel] Vega ‘unloaded’ into Guardado’s back ‘without provocation or justification.’ ”

The deputies said Guardado had a handgun, which the teen had placed on the ground but then reached just as he was about to be handcuffed by Vega.

In a related story, The Times reported in August that a deputy named Austreberto González told investigators Vega and his partner Chris Hernandez were part of a secret gang of Sheriff’s deputies called the Executioners who operate out of the department’s Compton station. Vega’s attorney said his client denies González’s claim.