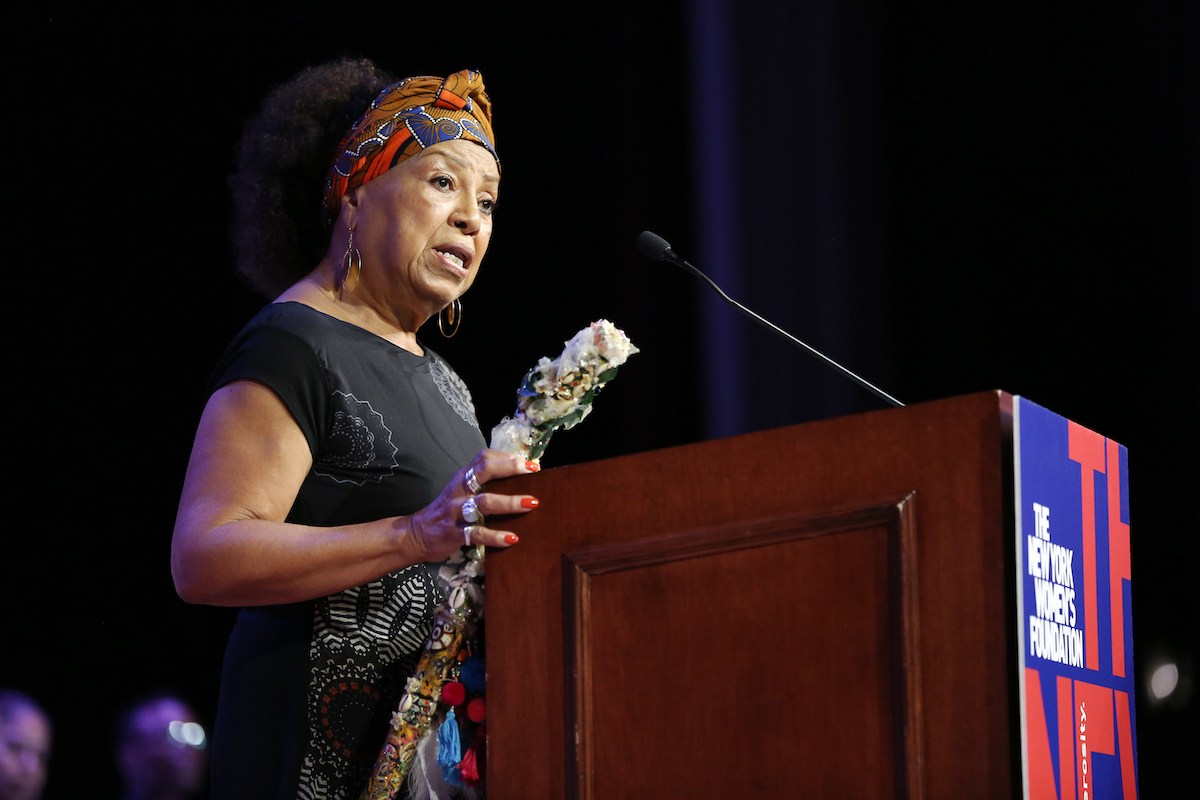 This article was first published on The Latinx Project at NYU website. Read the original piece here.

“…In order to be a true revolutionary, you must understand love.  Love, sacrifice, and death.” –Sonia Sanchez

When considering the injustice of COVID-19’s devastating and disproportionate impact on communities of color, as well as the countless victims of police brutality, anti-blackness, and structural inequality, the saying las flores se dan en vida (flowers are given in life), like so many other adages of the past, takes on a more urgent meaning. Roughly translated, it is a reminder to honor the living. Which is to say, in this context, recognizing the struggle of those who are still with us and carrying on the fight for racial, cultural, and economic equity.

For Dr. Marta Moreno Vega, a Black woman of Puerto Rican descent, born and reared in El Barrio, the current rise of a global movement for Black lives and collective liberation aligns with her unwavering vision for a better world. Her steadfast commitment throughout her long career —creating new spaces, opportunities, and possibilities for our communities to see themselves in an empowering light while challenging oppression— is her legacy.

Dr. Moreno Vega created the Creative Justice Initiative (CJI) a little over two years ago with the intention of building an intergenerational, inclusive platform to confront systemic inequality. Arts and culture organizations representing communities of Black/African and African Descendents, Latinx, Native, Arab, Asian, South Asian, Pacific Islander, Appalachian, LGBTQIA+/Two Spirit and People with Disabilities remain chronically under served and underfunded. Rooted in community and solidarity, Dr. Moreno Vega believes that “it is in honoring our unique contributions that we establish common grounds of understanding.” To that end, she’s built a coalition for CJI’s first national action, a survey under the banner “Achieving Cultural Equity;” a title that reflects the mindset which has informed her life-long approach to work.

From El Museo to CCCADI: A Visionary Emerges

Dr. Moreno Vega began her career in education just as white power structures faced challenges from the revolutionary ethos of the Black Power movement and the Young Lords, along with local organizers and activists like the late Evelina Antonetty and Dr. Antonia Pantoja. This energy fueled, among other goals, a desire among Puerto Rican parents to give their children access to education that reflected their history and culture. This socio-political struggle and fight for representation fed El Museo del Barrio’s original vision and mission. Before founding the museum in 1969, artist-Shaman Rafael Montañez Ortiz authored a Destructivist Manifesto in 1962 as his research into indigenous culture, world religion, and his own Yaqui and Puerto Rican heritage led him to reexamine histories, and deconstruct objects imbued with colonial histories.

With a background in education and believing in the community’s mandate for a museum depicting their history, Dr. Moreno Vega was voted in as the second director of El Museo del Barrio. She would serve as director for five years, until March of 1975, and curated groundbreaking exhibitions such as Aspectos de la esclavitud en Puerto Rico, which documented enslavement and Afro Puerto Rican heritage. That same year, she co-founded the Association of Hispanic Arts (AHA), alongside major cultural figures such as the late Miriam Colon, founder of the Puerto Rican Traveling Theater; the late Max Ferrá, founder of INTAR; Tina Ramirez, founder of Ballet Hispanico; and Marife Hernandez, who in 1970 began a television program, ”The Puerto Rican New Yorker,” and went on to become one of the community’s most active representatives. For nearly 35 years, AHA was New York City’s only arts service organization focused on promoting and supporting Hispanic artists and institutions, issuing a publication in the 1980’s for which the late Cuban playwright and writer Dolores Prida served as editorial director. Its doors closed in 2009.

Through a 1976 senior fellowship funded by the Rockefeller Foundation and implemented by the Metropolitan Museum of Art, Dr. Moreno Vega conducted the research that laid the groundwork for the creation of the Caribbean Cultural Center African Diaspora Institute, (CCCADI). The institution’s offerings explore and celebrate the diverse philosophies and aesthetics based in African root traditions as manifested in the African Diaspora. Dr. Molefi Kefe Asante, Chair of African Studies at Temple University, soon noticed her work and helped her to obtain a full scholarship while also encouraging her to earn her doctoral degree in African Studies. He saw then what many see now, that Dr. Moreno Vega’s work was prescient, anticipating by decades the current clamor from young people of African descent for an authentic representation and deeper understanding of the rich and complex historical legacies embodied by people of the African Diaspora in the U.S., the Caribbean, and across the Americas.

Yet the same underfunding issues continue into the present. Dr. Moreno Vega recalls from her tenure at El Museo del Barrio, “When the state ceased its funding around educational activities, we had no funding, no support whatsoever;  with no funding for the arts, we, a staff of 12, committed to work for a whole year without pay to make the museum survive for our community.” Just last month, Billy Ocasio, a former alderman, president of the National Museum of Puerto Rican Arts and Culture in Chicago and CJI supporter, acknowledged this historical trend of underfunding museums of color, stating plainly, “We’re just tired of being left behind.”

How then should we expect organizations which have been and continue to be underfunded to be able to serve the community as they struggle to withstand the devastating economic fallout of COVID-19?

In 1968, Rev. Dr. Martin Luther King, Jr. and many others called for a “revolution of values.” Coalition-building approaches of the past, such as the Rainbow Coalition, Poor People’s Campaign, and Third World Liberation Front, inspire Dr. Moreno Vega’s call for racial, cultural, and economic equity. In this way, the work of the CJI complements the myriad advocacy campaigns underway seeking to upend the racist policies that permeate society, and that arose with the rampant, unjust murders of Black lives. In this effort, she is joined by the family she’s created, some of the most respected cultural leaders in the field, including Dr. Amalia Mesa-Bains, Dr. Lowery Stokes Sims, and Dudley Cocke; as well as Melody Capote, who now serves as the executive director of the Caribbean Cultural Center Africa Diaspora Institute; and many others. “We are in talks directly with an array of artists, cultural workers, organizations and regional networks —the time is now”, says Dr. Moreno Vega. “We, like others, are building on the momentum of the Black Lives Matter movement— the synergy, collective urgency, and need to stand and speak united,” she added.

A post shared by Creative Justice Initiative (@creativejusticeinitiative) on Sep 2, 2020 at 7:02pm PDT

Without commitment to invest in and strengthen the diverse community arts ecosystem, the same calls we’ve seen before for pathways to diversity and inclusion will continue to fall short.

“These outdated frameworks, whether from government or philanthropy, are by and large the root cause of the impoverished cultural and civic life we are experiencing today. One example of an alternative formulation could be to invest in our national cultural commonwealth with substantial and sustained public support for artists and the community-based organizations that support them,” offered Dudley Cocke, who recently retired as Director of Roadside Theater/Appalshop for the past 40 years in Appalachia, and is a partner of the CJI.

When you look at the funding that goes to our institutions, you see a tremendous disparity in the amount that is given—the assumption being [that] you’re giving this charitable money to the institutions that need it, but in reality that’s not happening,” says Dr. Moreno Vega. “And in the year 2020, you should have a spectrum of institutions across the country that look like the country.” Thus, the CJI initiative seeks to address this disparity by compiling and analyzing data and fashioning a cogent narrative from the respondents in the form of a “Brown Paper.” This will reveal, in real-time, the impact of inequitable funding from government entities and philanthropy while identifying corrective solutions.

Available on the CJI website, the survey will serve as a first step to provide information on the meager funding thatT goes to small to midsize cultural organizations. “Generally, when we have brought up the issue of underfunding, the response is always what is the data, show us the data […] so we decided to take on the responsibility,” says Dr. Moreno Vega.

Join the Call for Racial, Cultural and Economic Equity to support historically underfunded and under resourced small to midsize arts and culture organizations. Now is the time to unite in collective action to demand investment in our communities, our work, and our practice. To support the self-determination, vision, and agency of our communities, we commit to openness and transparency in this process and all findings will be shared publicly and anonymously. The survey will remain open for data and information gathering through August 31, 2020.

A post shared by Creative Justice Initiative (@creativejusticeinitiative) on Aug 4, 2020 at 9:09am PDT

What makes the CJI different, moreover, is its broad, national focus on the plight of smaller institutions and cultural networks serving vulnerable and marginalized communities across the U.S. and their economic precariousness. “The survey will give us a look at what is happening to our institutions, what has occurred historically and what is occurring now, under this pandemic,” says Dr. Moreno Vega. To further dissect the findings of the research, CJI is convening “Culture: Race, Myth, Art = Justice,” a series of conversations exploring how to organize and hold accountable the systems that undervalue community work and perpetuate the chronic underfunding of these organizations.

Efforts like the Cultural New Deal and the Latinx/POC Arts Legacy Consortium “…are important and more importantly, we are supportive of one another,” Dr. Moreno Vega explains. Above all, Dr. Moreno Vega cautions against repeating the same mistakes of the past, including fleeting attempts to address diversity without offering an alternative dismantling of dominant white supremacist power structures. “If you construct a plan for inclusion that’s exclusive of the people that are supposed to be served and they don’t have the voice within that structure, then the results are the same,” she said.

As the nation continues to grapple with how to shape a new reality, questions of decades past come to the fore: Do people with the power have the courage to share power, authentically? Is there a real vision to support community agency and address the needs of the historically under-resourced and underserved? Are we willing to work collectively to explore alternative formulations for those who pursue democracy? “We can’t look at a model that works because it doesn’t exist,” says Dr. Moreno Vega. Instead, what communities are clamoring for is intentional structuring of systems centered in parity to address our aesthetic, our narrative, and our legacy.  “We’re not going back to normal; the old normal wasn’t OK.”

To learn more about the Creative Justice Initiative, future reports and activities that will take place,  visit the website.  To fill out and share their online survey, click here; it will remain open through September 10, 2020. CJI’s website and digital assets are designed by Olga Chapman-Rivera.

One thought on “Achieving Cultural Equity: A Call And Response With Dr. Marta Moreno Vega”