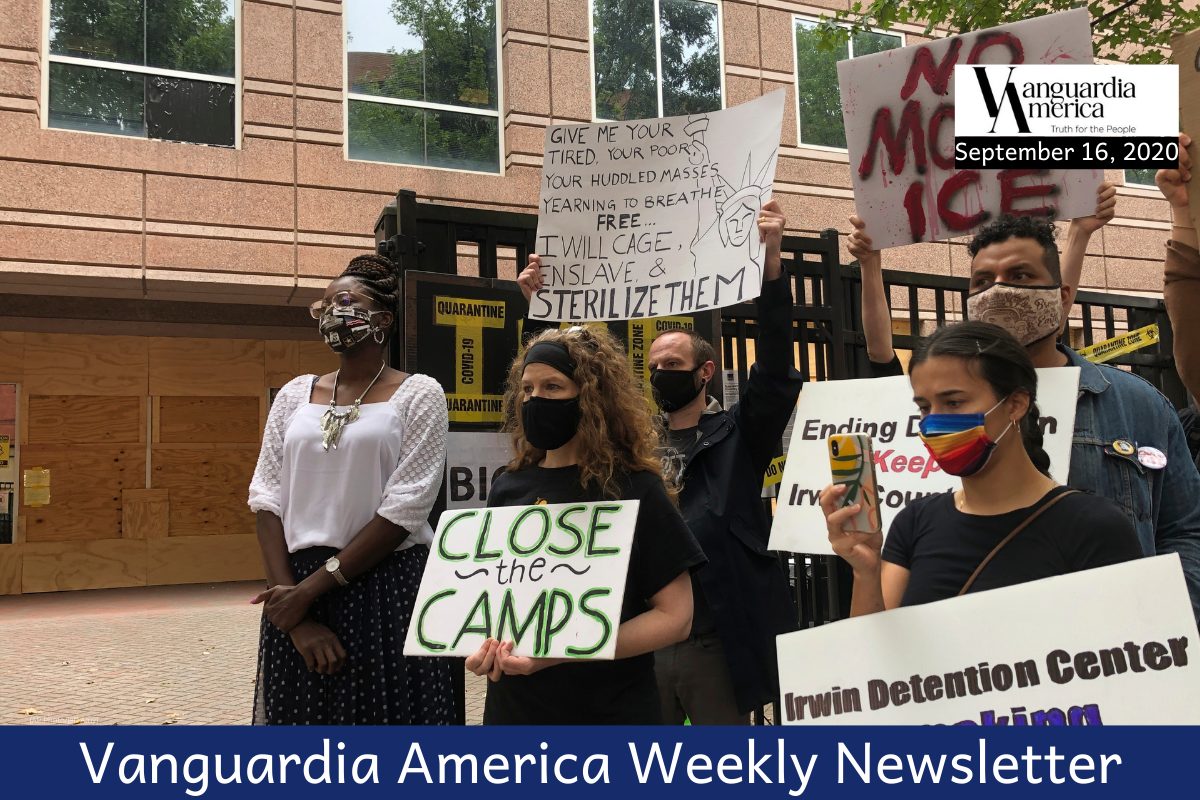 A nurse in Georgia says officials at a federal detention facility have engaged in dangerous health practices, including allegedly performing forced hysterectomies on immigrant women.

On Monday, a formal complaint was filed with the Office of the Inspector General at the U.S. Department of Homeland Security (DHS) by a group of four immigrants rights organizations outlining the charges leveled by a whistleblower named Dawn Wooten.

According to the complaint, Wooten, a licensed practical nurse, alleges numerous incidents of “jarring medical neglect” involving immigrants being held at the Irwin County Detention Center in rural southeast Georgia.

Her complaint also “raises red flags regarding the rate at which hysterectomies are performed on immigrant women under ICE custody at ICDC,” where management has also allowed “employees to work while they are symptomatic awaiting COVID-19 test results and hiding information from employees and detained immigrants about who has tested positive for COVID-19.”

Project South, an advocacy group helping to represent Wooten in her complaint, said, “Recently, a detained immigrant told Project South that she talked to five different women detained at ICDC between October and December 2019 who had a hysterectomy done. When she talked to them about the surgery, the women ‘reacted confused when explaining why they had one done.’ ”

A hysterectomy involves the removal of a woman’s uterus, after which she can no longer become pregnant. Wooten said the doctor performing the hysterectomies, Dr. Mahendra Amin, was known by detainees as “the uterus collector.”

In a Twitter post, Janet Murguía, President and CEO of UnidosUS, called the claims made by Wooten “horrifying,” and added, “The Trump Administration is harking back to an especially dark & ugly time in our history when white supremacy and eugenics infected our government’s actions.”

Just horrifying. The Trump Administration is harking back to an especially dark & ugly time in our history when White supremacy and eugenics infected our government’s actions. No doubt, then, that this is the gross handiwork of Stephen Miller. Investigate now! https://t.co/woS8CIHgEY

Ilyseh Hogue, President of Pro-Choice America, also wrote on Twitter, said, “A whistleblower at ICE today exposed that mass hysterectomies are being performed on detained immigrants… The vicious cruelty is staggering.”

A whistleblower at ICE today exposed that mass hysterectomies are being performed on detained immigrants. If it sounds like a horror show, that's because it is. Gender oppression has a direct correlation with authoritarianism. This is beyond. The vicious cruelty is staggering.

Wooten explained why she filed her complaint in an interview with The Intercept: “You don’t want to see what you’re seeing. You’re responsible for the lives of others.” Despite her complaints, she said, management at the detention facility refused to address the problem. Instead, Wooten told NBC News she was demoted in July in retaliation for raising her concerns with supervisors.

The nurse said her health was also put at risk by the facility’s managers. Wooten, who is African American and has sickle cell anemia, said she was not warned in advance that at least three of the immigrants she was ordered to care for had tested positive for COVID-19. People with underlying health conditions are considered especially vulnerable to COVID-19. Wooten also has a child who suffers from asthma.

In her complaint, Wooten further claims that immigrant detainees were punished with solitary confinement for complaining about the prison’s substandard health treatment.

The Congressman called on the Inspector General at DHS to launch an immediate investigation and said an investigation by the House is already underway.

“This fiscal year, 19 people detained in ICE custody have died, several from COVID-19,” said Castro. “As many people as possible should be swiftly and safely released from detention to prevent anymore massive outbreaks and an even greater loss of life.”

In a press statement released Monday, the U.S. Immigration and Customs Enforcement (ICE) agency said, “ICE takes all allegations seriously and defers to the [Office of the Inspector General] regarding any potential investigation and/or results.” The agency added that Wooten’s allegations “should be treated with the appropriate skepticism they deserve.”

The detention center is run by LaSalle Corrections, a private prison company that operates facilities housing thousands of immigrants in Georgia, Texas, and Louisiana.

The City of Houston has suspended four police officers in the wake of the shooting of 27-year-old Nicolás Chávez. The father of three had a history of mental illness.

Police shot and killed Chávez on April 21 after a 911 call that he was “endangering himself by stepping into highway traffic,” NBC News reports.

Houston Mayor Sylvester Turner at a press conference last week said, “No one should conclude that the dismissal of these officers is an indictment on [the Houston Police Department], of the 5,300 police officers. But when you are wrong, there are consequences.”

Police shot Chávez 24 times during the incident. His father, Joaquín Chávez, called it “an execution.”

The officers involved in the shooting were Benjamin LeBlanc, Luis Alvarado, Omar Tapia and Patrick Rubio. All four are challenging their suspension.

More than 1,000 people have been shot and killed by police since January 1, 2020, according to a Washington Post database.