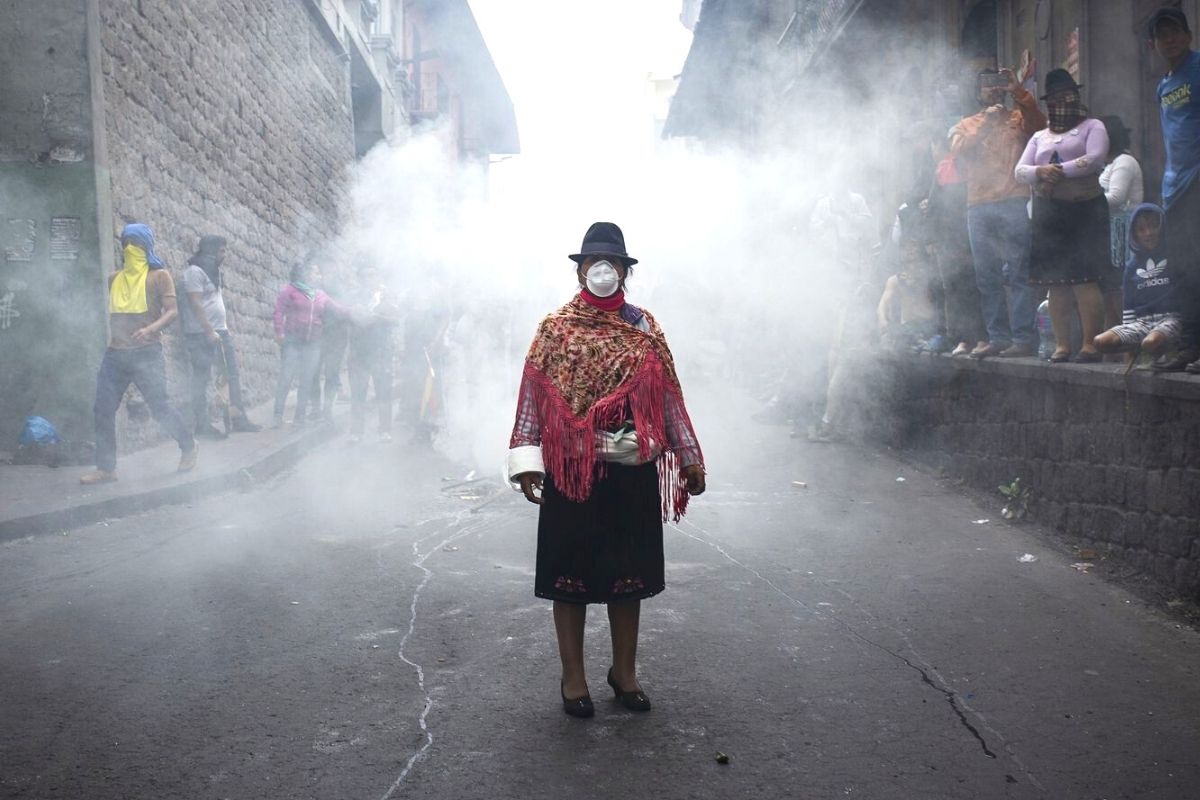 In October 2019, Ecuador went through one of the largest and most violent uprisings in its recent history. Thousands of Ecuadorians, including Indigenous communities from the Andes mountains, marched into Quito and protested for 12 days straight after former President Lenin Moreno cut decades-old fuel subsidies and implemented tax and labor reforms.

As Ecuador’s police and military forces faced protesters, the demonstrations turned into armed riots. Amid the chaos, photographer David Diaz —member of the photo collective Fluxus Foto— captured an image that would become an international icon. In the photo, an Indigenous woman wearing a face mask stands alone in front of a cloud of smoke, just moments after a Molotov bomb detonated behind her. Today, Diaz’s photo hangs at the headquarters of the Confederation of Indigenous Nationalities of Ecuador to honor the uniting of the Andino communities to defend their rights.

Diaz is one of the 12 members of Fluxus Foto. The collective was formed in 2016 by Johis Alarcón, an award-winning photographer known for documenting movements for social equality and reproductive rights throughout the Americas. She founded Fluxus to extend the reach of photojournalists in her home country of Ecuador, and to show the world the struggles of Ecuadorians in their pursuit of social justice.

Fluxus photographers have covered demonstrations throughout the country and immersed themselves in local Indigenous communities—even now, during a global pandemic. When COVID-19 forced Ecuador to undergo a national lockdown, Fluxus Foto members swept the main cities of Quito, Guayaquil, and nearby rural areas to capture how schools continued teaching classes with children working remotely. Fluxus photographer Ana Maria Buitrón’s work shows how the principal of an intercultural school —where Indigenous traditions are preserved and Quichua and Spanish are both taught as equally predominant languages— teaches a class through Whatsapp to students with access to a smartphone, who watch from their homes.

In this “How I Made It” segment, Buitrón, Alarcón, and Diaz remember the achievements and challenges they’ve faced in their efforts to spotlight Ecuador’s current events in the world’s media. They also talk about Fluxus’s future ambition to become an inclusive photojournalism school for Ecuador’s next generation of photographers.