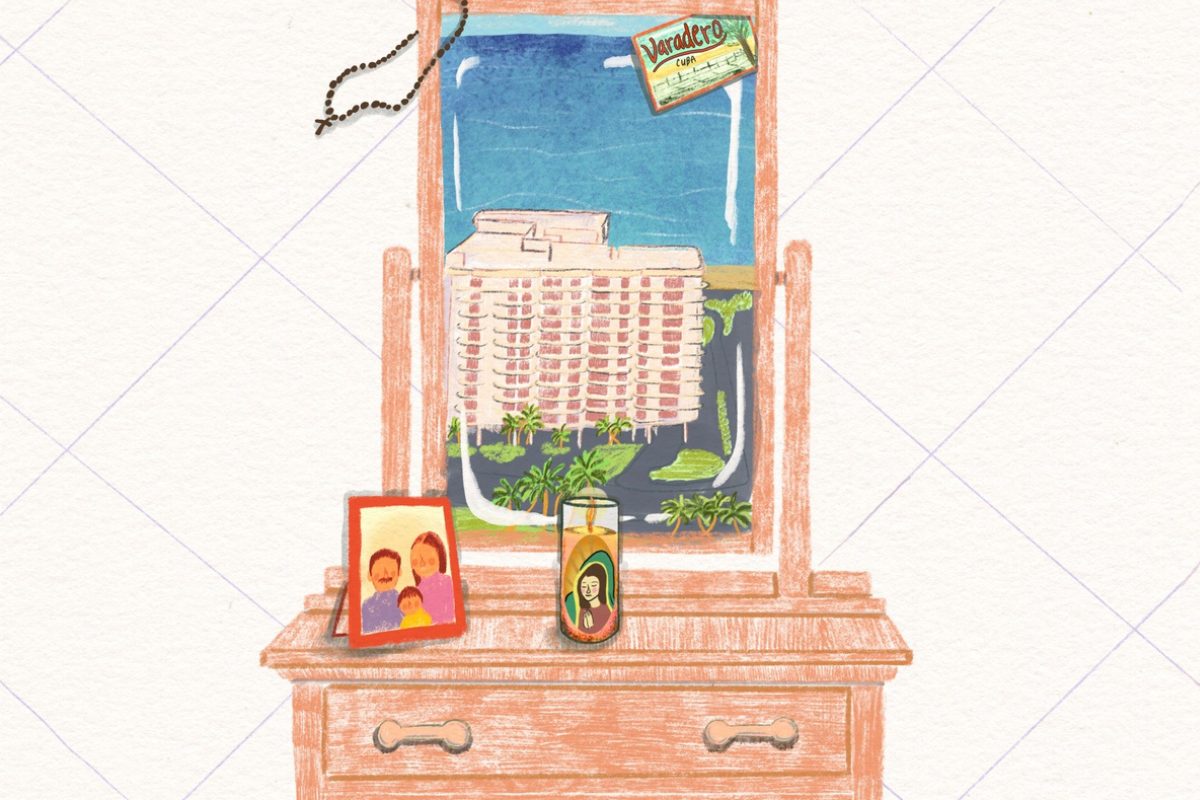 One year ago on June 24, a small beachside town in South Florida was asleep. It was the summer, past one in the morning, and the beach was snoring outside the Champlain Towers South. But suddenly, the condo standing opposite a sign that welcomed you to Surfside started groaning. The pool deck went first, looking like a Florida sinkhole. And then at 1:23 a.m., the section of the L-shaped building that pointed to the beach collapsed.  Twelve stories of apartments pancaked in about 30 seconds. Ninety-eight people died. Most of the victims were Latinos and Latinas: like a college couple, both 21 years old, who were in town for a funeral. And three generations of an Argentinian family who lived together.

For the first anniversary of the collapse, we’re visiting Surfside with producer Elisa Baena who lives there with her widowed grandma. Before leaving Cuba, Elisa’s grandparents lived in Varadero and dreamed of having a home on the beach again in exile. It would take them about 40 years, but they finally did it as retired abuelos when they moved to Surfside.

Like Elisa’s grandparents, many come to live new chapters of their lives in Surfside. Alfredo Lopez and Marian Smeraldi-Lopez moved there to raise their son on the beach and lived in the Champlain Towers South for 23 years — most of their son’s life. María Iliana Monteagudo, a 65-year-old Cuban exile, watched from the water as the Champlain Towers South was built in the early 80s and told herself: “If I ever live in an apartment, I want to live here.” She finally moved in, six months before it disappeared.

In this town of roughly 6,000 residents, beachfront condos are capped at 12 stories and loggerhead sea turtles nest in their backyards. It’s a mostly middle-class area despite its elite origins. A social club built like a Mediterranean estate opened in 1930, where guests like Winston Churchill vacationed after World War II and Elizabeth Taylor posed with half-pointed toes on a diving board. The town was incorporated by Surf Club members into the City of Miami Beach five years later.

In less than a century, it would become a place where the same street saw Isaac Bashevis Singer win the Nobel Prize in Literature and scenes of the “Real Housewives of Miami” were filmed. Surfside is described by its own community as somewhere private, quiet and safe — so when a building failed in the middle of the night last year, it felt like the town’s identity did too.

In this audio essay for Latino USA, Elisa talks to survivors of the collapse and other members of the community to understand how their relationship to Surfside — and each other — has changed since then. It’s a story about home: what it’s like to lose it, and what happens when the place that holds some of your best memories becomes the site of an international tragedy.