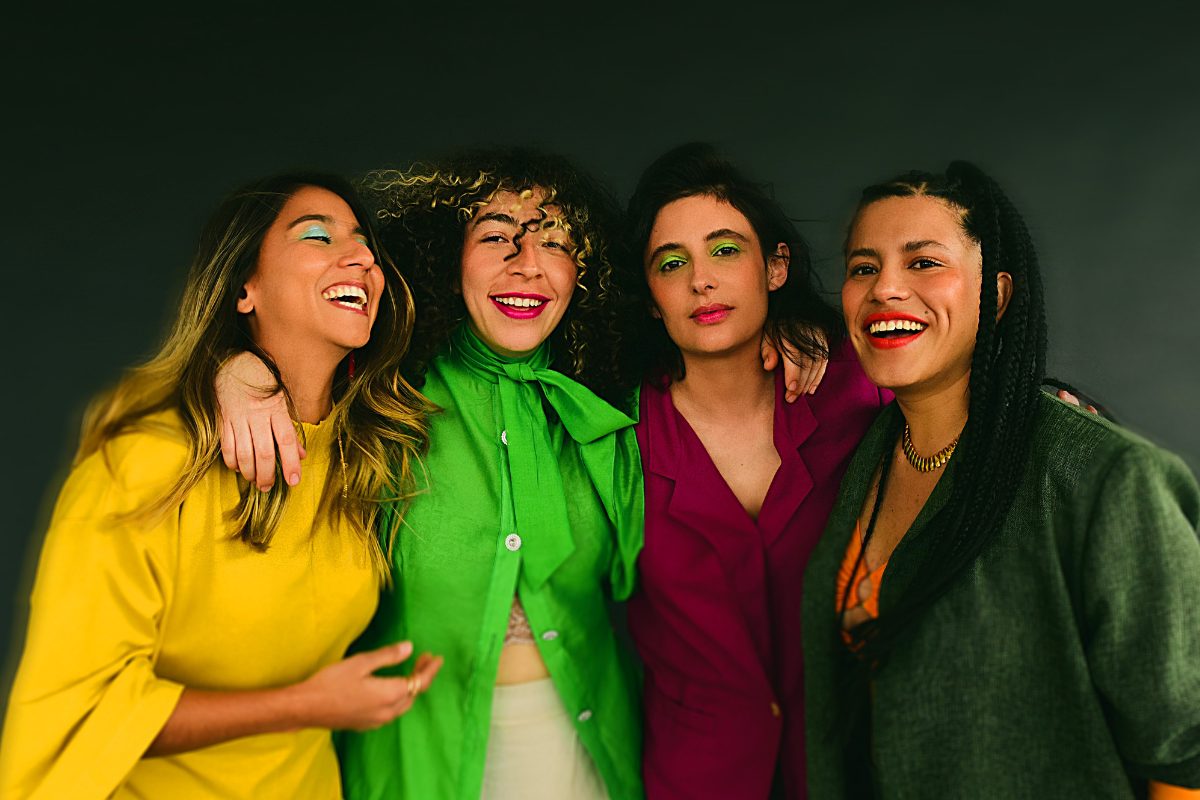 When the members of LADAMA met for the first time, it felt as if they already knew each other. Lara Klaus from Recife, Brazil; Daniela Serna from Bogota, Colombia; Maria Fernanda Gonzalez from Barquisimeto, Venezuela; and Sara Lucas from St. Louis, Missouri all attended One Beat, a residency for socially engaged musical artists, in 2014. That was the beginning of what would become a years-long journey of sharing rhythms and traditions from their home cultures together. They would call this new musical experience LADAMA.

Maria Fernanda remembers that the residency was her first experience seeing other women playing music professionally. That realization shocked her, and it sparked her desire to share the music she was creating with LADAMA. Maria Fernanda, Lara, Daniela, and Sara wanted their work to educate and empower young people — especially women and girls — across Latin America and the US. Even though they weren’t sure what genre of music they wanted to play, Maria Fernanda says what was clear was “the idea of a collective impacting community through sounds.”

In the year after the residency, all four members of LADAMA began to crowdfund and applied for grants. They embarked on a self-produced, months-long tour throughout Latin America and the U.S., giving public performances and hosting workshops in each member’s home country.

The women of LADAMA emphasize that everyone is capable of creating music and art. Reflecting on a workshop they gave in Gamero, Colombia, Lara and Sara both noted that music is a form of community-building, as well. “What we started to realize in these communities, and even connecting with each other, is how to use your body as an instrument,” Sara said. “Percussion is like a first language for a lot of people.”

Lara went on to quote Naná Vasconcelos, a renowned Brazilian percussionist, who said, “The voice is the first instrument, but the body is the best one.”

Through exercises of body percussion, singing, and recording, LADAMA’s workshops connect participants with their bodies, their voice, and legacies of afro-indigenous resistance music. “We’re not sharing just music, but it’s oral tradition and it’s ancestral knowledge,” Daniela said. “Music education should be a right, not a privilege.”

In this episode of Latino USA, the members of LADAMA share their origin story as friends and collaborators, and take us through developing their own pedagogy that aims to empower women and girls to connect through voice, percussion and movement.