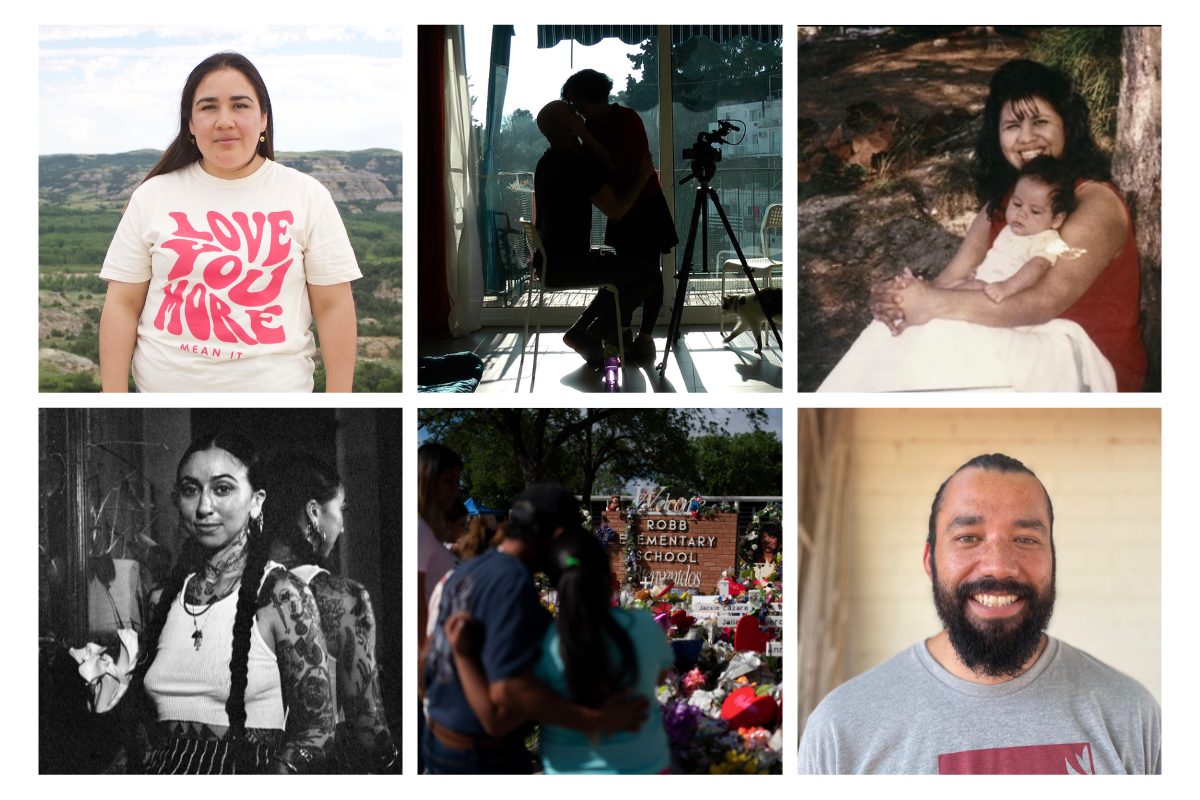 This year, Latino USA produced moving and immersive storytelling that humanized the lives of Latinos and Latinas across the country. You listened to the family of Melissa Lucio fight for her exoneration in Texas, Maria Hinojosa interview families affected by the Uvalde shooting, and people in Arizona and North Dakota shape the economics and politics of those states. You were immersed in the origins of “chisme” and the birth of an ancestral language. You also listened to a former senior producer bare his soul, speaking candidly about the infinite search for home and belonging, and intimate interviews with artists, explaining how their craft in tattooing or video gaming helps form their identities. 2022 was a groundbreaking year that cemented Latino USA’s prestige in the audio industry.

Here are our editorial team’s episode highlights for 2022.

The Race to Save Melissa Lucio

Sometimes your favorite story of the year isn’t the nicest done or happiest, but the most important. And what is more important than a human life? This year I had the privilege to work with producers Victoria Estrada and Reynaldo Leaños Jr. on “The Race to Save Melissa Lucio,” in which we brought to our listeners’ attention the case of Melissa Lucio, the first Latina on death row in the state of Texas in 160 years. Melissa was scheduled to die in April, but soon after our show aired in late March, there was news that her defense had achieved a stay on her execution, which we also reported on. Melissa and her family keep fighting for her exoneration and I look forward to bringing all major updates to our listeners in 2023. — Andrea López-Cruzado, Senior Editor

Covering “breaking news” is probably my least favorite part of journalism, so when I got assigned to work on our Uvalde story after the shooting, I felt overwhelmed and, honestly, scared. It wasn’t only the fact that we had to act quickly and put together a story in less than two weeks, it was also having to reach out to people who were going through the most unimaginable pain and ask them questions that could make them relive their trauma.

We were a team of four: Victoria Estrada and Reynaldo Leaños Jr. as producers, Daisy Contreras and I as editors. This incredible team made me feel so supported and safe at all times, in a way I didn’t know it was possible. We had many conversations among ourselves and with Maria Hinojosa, and we all agreed that we didn’t want to focus on the immediate tragedy and that we wanted to respect the families who had been directly affected. Instead, we decided to tell a deeper, more inspiring story of resistance that’s very unique about this town and its Latino community.

Once we had this clarity, everything flowed. I learned a lot from listening to Maria interview with such respect and compassion, from our producers, who prepped the interviews so well and turned them around so quickly, from Daisy and her ability to edit fast without losing perspective, and from our engineers, who were able to still make their magic happen in record time. I cried every single time I had to listen to each of the interviews. It was a heavy emotional burden, but the way we shared it as a team, and the fact that we knew we were contributing to something meaningful, made it so much lighter. — Marta Martinez, Senior Editor

Ever Since the Oil: Part One and Part Two

Reviewing Census data is always pretty interesting for me, but when I learned that North Dakota saw the biggest growth rate of Latinos and Latinas in the entire U.S. between the years of 2010 and 2020, I knew I had to go there and do a deep dive into that piece of data.

So you might still be asking what’s the reason for the growth in North Dakota. Well, the answer is pretty simple… jobs, specifically in the oil and gas industry. I was fortunate enough to travel to North Dakota with Maria Hinojosa, who had visited the state about a decade ago. Maria was already starting to see the early signs of the massive growth in North Dakota during her reporting for an episode of America By The Numbers.

The reason this story is something that I’m extremely proud of is that I had the space and opportunity to try and tell a very nuanced story. The two episodes in the series look at the business and workers in the oil and gas industry, the changing demographics of the state, the impacts of this industry on the environment and Native communities, and how some Latinos and Latinas are trying to build a community for the long haul. If you want to take a trip to North Dakota with Maria and me, tune in to these two episodes! — Reynaldo Leaños Jr., Producer

One of my favorite things about Latino USA is the wide range of stories that we, as a team, are able to bring to our audience, and that includes our cultural stories! Elisa and Monica take us on a wild and joyous ride to answer thoughtful —and sometimes silly— questions all revolving around chisme.

On this journey, we meet two cast members of the “Real Housewives of Miami,” a journalist who covers entertainment news, and an academic who focuses on gossip. This story highlights a lot of the freedom and creative expression that producers have at Latino USA, so if you want to listen to something light and fun, but also want to learn something along the way, I recommend this episode.

Also, make sure to follow Elisa and Monica on their social media because they’re out there doing some pretty incredible things! — Reynaldo Leaños Jr., Producer

Oftentimes the most interesting and illuminating voices are those you find when you’re not thinking of this work as news gathering—a strange thing to say about a news and culture show, I know, but it’s true. Among other things, Latino USA thrives when it lingers in everyday experiences, welcoming us all to interrogate topics that are considered commonplace or otherwise dismissed. In this case, it was body art—an absurdly rich topic of discussion, and one I only just started to scratch the surface of in this piece.

I remain grateful for Tamara’s generosity with their time for this story, for their thoughtful discussion of tattooing as a form of personal liberation, and for their insights into the modern-day history of the art form, with its roots in Black and Latinx communities and the U.S. prison system. Producing this piece was one of the most satisfying experiences I had this year—it was extremely educational, but also just… a ton of fun! It’s what I’ve always turned to Latino USA for. — Alejandra Salazar, Producer and Associate Editor

I’m a sucker for personal narratives. I like the feeling of a “nudo en la garganta.” So the audio memoir “Limbo,” by former Latino USA senior producer Miguel Macias, moved me to the core. It’s a migration story—the fear of failure, the anxiety of finding a place to belong, a place to call home. Through intimate interviews with friends, family members, and significant others, we go on an emotional journey and listen to a man make sense of his relationships, his career, his passions, his loves, his life. Miguel doesn’t hold back. He shows vulnerability and isn’t afraid to bare his soul before us. The poetic writing and heartfelt delivery coupled with layers of textured sound design make this piece such a poignant tale about humans’ infinite longing for happiness. You’ll get teary-eyed while simultaneously beaming with a smile on your face. — Luis Luna, Marketing Manager

How to mark the anniversary of a tragic event? What is that supposed to look like? And what kind of story can one tell? I was in complete awe when Elisa Baena, a former fellow at Latino USA, brought us a pitch to commemorate the first anniversary of the collapse of the Champlain Towers South in the small beach town of Surfside, Florida. Most of the 98 victims were Latinos and Latinas. Elisa, a Surfside resident herself, took us on a unique and poetic journey through the life of the town, the endearing characters in its community —including her very own grandmother— and the collective process of grief that comes and goes in waves. Ultimately, the piece combines a tale of immigration and memory and it makes us reflect on what it means to cope with the fact that our loved places —or, rather, our memory of those places— are constantly changing. This story defies time and it’s a strong statement of Elisa’s power to immerse the listener with evocative and truly beautiful writing. — Patricia Sulbarán, Producer

I drove for hours across Arizona for a week chasing after one of the most fascinating political stories ahead of the midterm elections. A traditionally Republican stronghold, the state of Arizona gave victory to Joe Biden in 2020, in part because of a grassroots movement of Latinos and Latinas who knocked on hundreds of thousands of doors to register new voters. I went to meet them and see how they were planning on maintaining that momentum. I became a fly on the wall of sorts. I got to tell a political story through the very personal perspective —and emotional roller coasters— of three organizers in rural and urban parts of the state, while they were dealing with the super-high stakes of fighting against Trump-endorsed and election-denying candidates on the Republican side. — Patricia Sulbarán, Producer

I love segments where I get to learn about everyday interesting people, their work, and their passions. “Identity, Language and Community Through Video Games,” produced by Victoria Estrada, fits that bill. We hear from Samantha Ortiz, a 25-year-old game writer and narrative designer making it in a predominantly male and white industry. Intertwined with that story is one about language, identity and belonging. I loved the creative ways Victoria uses sound design to immerse us into the narrative and bring Samantha’s video games to life. Listening to Samantha talk about her memories with her grandparents also made me think about my own childhood growing up with my grandparents in Mexico City. What an emotional rollercoaster! — Daisy Contreras, Editor

One of my favorite stories this year is the one that highlights the career and life of Mexican composer Maria Grever. This was the first audio piece in the “Genias in Music” series. Grever wrote that song that we all know: “What a Difference a Day Makes.” It was so beautiful to hear about this influential person whom history has denied recognition for her impact on music. She was a trailblazer, as were the other women that were featured in the series. It is beautiful that Producer Jeanne Montalvo and Latino USA were able to shed a light on these stars, and hopefully, these stories will impact some people moving forward. — Julia Caruso, Senior Audio Engineer