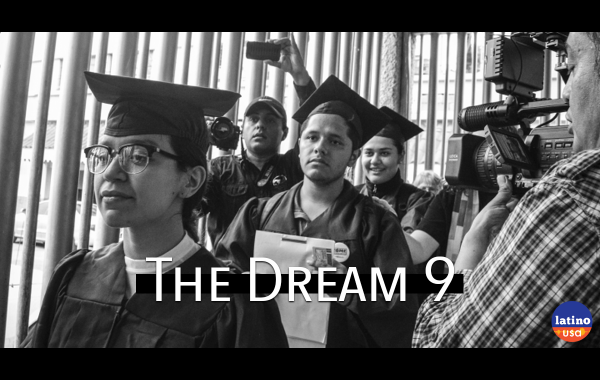 In 2013, nine young undocumented activists walked from Mexico up to border officials in the United States and demanded to be let in and granted asylum. They were wearing their graduation caps and gowns—a uniform that had become the unofficial symbol of the DREAMer movement. They walked arm in arm, flanked by reporters and cameras. If their plan failed, they risked never being able to return to the United States, the country where they grew up, ever again.

All nine were DREAMers—meaning they were brought to the U.S. without papers as children, and grew up considering it their home. Many didn’t find out they were undocumented until they were in their later teens, and were applying to college or a job without a social security number. Six of the Dream 9 had previously left the U.S. because their situation became too difficult, and now they wanted to get back. The other three were members of an activist group called the National Immigrant Youth Alliance, thought of by some as the most radical of the Dreamer groups. They flew into Mexico just to participate.

The Dream 9 took activism around youth immigration farther than it had ever been taken before. What they were doing was not only risky, but difficult. In the end, their action landed them in detention and in the national spotlight.

During President Trump’s 2016 campaign, he talked about removing DACA—the Obama executive order that shielded hundred of thousands of DREAMers from deportation. Since then, he’s changed position on how he’ll address the situation, and for now, we don’t know exactly what will happen. With DACA and the DREAMers poised to be back in the center of the national conversation, Latino USA revisits “The Dream 9” to explore what it means to be young and undocumented in the United States today.