LOUD: The History of Reggaeton 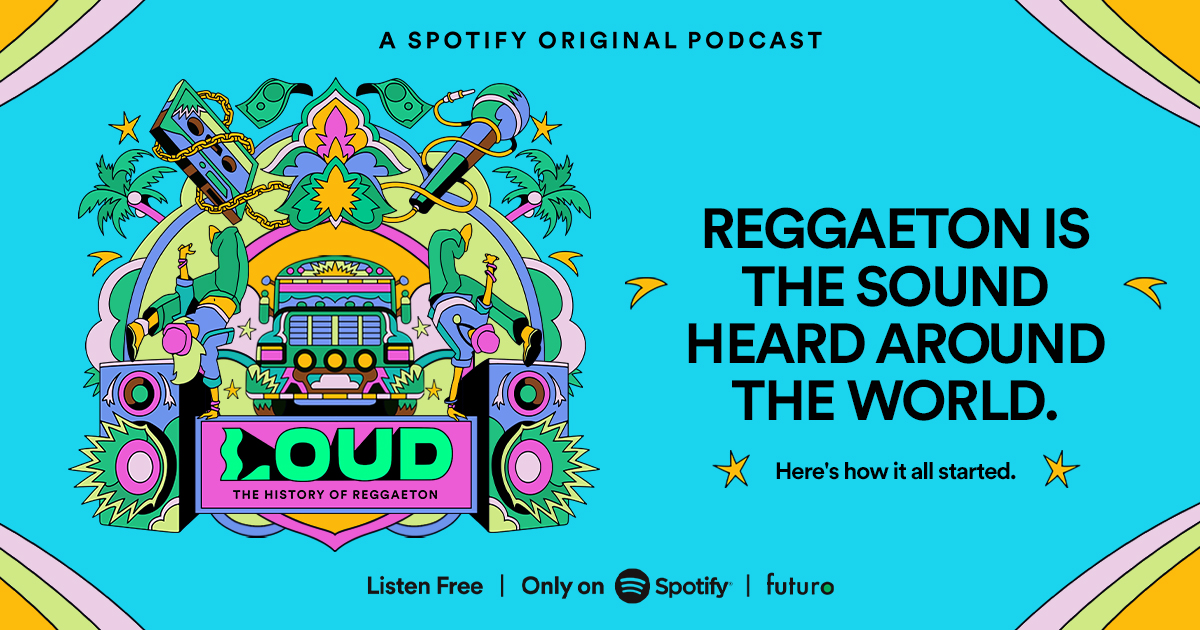 El General arrives in Brooklyn in the mid-80s to find a booming dancehall scene underway, and links up with Jamaican producers who start recording and promoting Panamanian artists. Around the same time, a Spanish-language hip-hop revolution is taking place as mixtapes fly back and forth from NYC and Puerto Rico, led by legendary rapper Vico C.

On the edge of Viejo San Juan, PR in 1991 there was a tiny night club. The Noise was DJ Negro’s place, where the “underground” movement was born, and where Ivy Queen got her big break. The Noise was a sweaty rap battle mixed with a rave—to the kids from the hood who flocked there every weekend, it was the coolest party in the world.

Episode 4: Underground and the Underworld

In the early 90s, a wave of drug-related violence in Puerto Rico leads the government to launch the “Mano Dura” policy of invading and occupying housing projects with the National Guard, and underground music gets caught up in the crackdown. At the same time, rival MCs go to war, and lyrical battles sometimes spill out into real-world violence.

“El underground” becomes Reggaeton and it spreads like wildfire. Lyrics about street topics evolve into sex jams. A trend of sexually explicit videos leads a telenovela star-turned-senator to launch a crusade to regulate perreo.

Episode 6: Stepping on the Gas

In the early 2000s, two artists emerged to take reggaeton to the next level. Tego Calderon’s smooth flows and message of Black pride wins new fans for the genre and Daddy Yankee’s “Gasolina” blasts out of Puerto Rico to become a global hit, marking the dawn of the global reggaeton era.

After “Gasolina,” music labels bet big on the genre and scramble to sign artists like Don Omar and Wisin y Yandel. But when a culture from the streets and corporate America collide, it isn’t always pretty. Meanwhile, artists battle for reggaeton crown and Hector el Father unleashes a reign of terror on the scene.

Media is quick to pronounce the death of reggaeton, but soon Puerto Rican artists like Nicky Jam find a new promised land and the genre gets a spark of new life in Medellín, Colombia.

Medellín, Colombia becomes a new reggaeton mecca thanks to a new generation of artists and producers. J Balvin, Maluma and others find a more commercial sound, and set the stage for reggaeton’s global takeover.

Reggaeton has now taken over the world. The scene has moved to Miami, where most of the biggest players are living and recording. As the music becomes increasingly commercial, some artists fight to keep the genre’s original rebel spirit alive. In this final episode, Ivy Queen looks back at her career and the legacy of the music she helped create.

The true story of the young people from Jamaica, Panama, Puerto Rico and beyond who beat the odds, refused to be quiet and created an irresistible musical culture that has kept the world dancing. Join Ivy Queen, one of the founders of the genre, for an incredible musical story about sex, race, drugs, censorship, and of course, perreo. From Spotify Studios and Futuro Studios.
***

Ivy Queen, or La Diva, La Potra, La Caballota, the Queen of Reggaeton is one of the founders —and one of the first women— of the genre. Ivy started as an underground emcee at The Noise and pushed the boundaries of the genre from her first song “Muchos Quieren Tumbarme” to her 2002 feminist anthem “Queiro Bailar”, and so many more hits. In this new podcast series from Spotify Studios and Futuro Studios, the Puerto Rican star takes us from Panamá to New York to Colombia and beyond to ​​tell the true story of the young people who beat the odds, refused to be quiet and created an irresistible musical culture that has kept the world dancing.

Marlon Bishop is a Peabody award-winning journalist and producer who currently serves as the VP for Podcasts for Futuro Studios, where he has been a key part of the creation of hit shows like Anything for Selena, Norco 80, Suave and La Brega. Marlon has been covering music in Latin America for radio and print for over 12 years for outlets including The FADER, NPR, MTV, Billboard and many others.

Luis Gallo is a Colombian-American journalist, writer and artist. His work has appeared on NPR, NBC, 99% Invisible, VICE, Slate, StoryCorps, Latino USA, Audible, PRX, among others. He was an artist-in-residence at the Queens Museum.

Sophia Paliza-Carre is a long-form narrative audio producer and editor whose work has appeared in WNYC’s Radio Rookies The Moth, Arizona Public Media, Latino USA and LAist Studios’ Norco 80. Radio series she has worked on have been recognized by a duPont-Columbia Award, and a 1st place AP award for “Best News Series.”

Jeanne Montalvo is a Grammy-nominated audio engineer and radio producer. She spent almost a decade working in music recording before breaking into radio after receiving her Masters in Music Technology from New York University. She has worked as an audio engineer and producer for NPR, Bloomberg Radio, the Duolingo podcast, The New York Times and Sony. She is the creator of “Live from Latino USA” a live and (mostly) unplugged video series that features Latinx talent.

Stephanie Lebow is a Peabody award-winning Sound Designer & Engineer based in NYC. Her experience with production for immersive audio, music, narrative video and radio, has given her a unique ear for audio storytelling. As the Supervising Senior Engineer at Futuro Media & Futuro Studios, she has worked on projects such as Latino USA, Suave, Norco 80, La Brega, In The Thick, Translash, Anything for Selena, Brown Love, and The Battle of 187.

Katelina “Gata” Eccleston is an internationally renowned music historian, creative and entrepreneur whose work is focused on the analysis and social paradigms of reggaeton. Her opinions have helped shape the landscape of reggaeton in publications such as The Washington Post, Rollingstone, Tidal and many others.

Joaquin Cotler is an Edward R. Murrow award-winning audio producer. A former GroundTruth Fellow and Marguerite Casey Equal Voice Fellow, Joaquin has focused on the opioid crisis and its impact on vulnerable communities in New York and Puerto Rico. His work has appeared on The GroundTruth Project’s “The Fix,” Latino USA, and LAist’s Norco 80. He keeps Puerto Rico in his heart, which he wears on his sleeve.

Hermes Ayala is a field producer and journalist in Puerto Rico. His work has been featured in Vice News, HuffPost and Ryot. He has a bachelor’s degree in journalism from the University of Puerto Rico, a diploma in International Sports Journalism from Instituto de Periodismo Jose Marti, Havana, Cuba and a master’s in Cultural Management from UPR. Ayala’s also a spoken word artist and a rapper. He’s worked with artists such as Calle 13, Cultura Profética, Yaga & Mackie Ranks, Puya, Intifada, and Bad Bunny.

Sandra Riaño is an artist scholar and audio producer. She graduated from Wellesley College where she discovered her interest in audio launching her own podcast, nos/otras. She grew as an audio producer at Spotify working on Gimlet’s Resistance team. At Futuro Studios, Sandra assisted with the production of LOUD: The History of Reggaeton and Anything for Selena. Sandra is passionate about people-driven histories and building community through storytelling.

Daniella Tello-Garzon is part of the class of 2022 at Northwestern University’s Medill School of Journalism. At the Daily Northwestern, she focuses all of her efforts on Sound Source, a podcast she started to create stories about musicians. At Futuro Media she has worked on shows like LOUD and Latino USA.