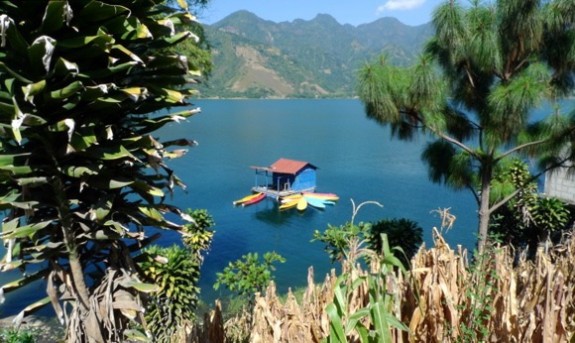 In 1955 the Guatemalan government designated Lake Atitlán as a National Park with the goal of encouraging tourism to the region. Until then, few people outside of Guatemala knew about this pristine enclave of nature, home to indigenous clans and villages since at least 600 B.C. To encourage eco-tourism, government officials made many blunders. For example, they added non-native North American bass (both small mouth and large mouth) to attract sports fishermen. The invasive species thrived, killing off large amounts of native fish and crab that led to the extinction of several bird species that had been unique to the region.

Over the years, over-population, tourism, and government inaction have taken their toll on the lake, home still to many villages where Maya culture is prevalent and traditional dress is worn. But many villagers complain of conflicting warnings by the government not to eat the fish or drink the untreated water. Others complain that the government, despite appointing a national committee to save the lake, has done little of substance to address the contamination of Atitlán. Even basics like replacing a sewage treatment facility damaged by a 2005 hurricane have gone undone.

Producer Maria Emilia Martin recently visited the region to see how dire the situation really was. She found concerned communities and people doing their part to save the lake. Yet few people, from local activists to international donors, trust the Guatemalan government to do the right thing.

Watch a slideshow of Flickr Photos published under a creative commons license while you listen.