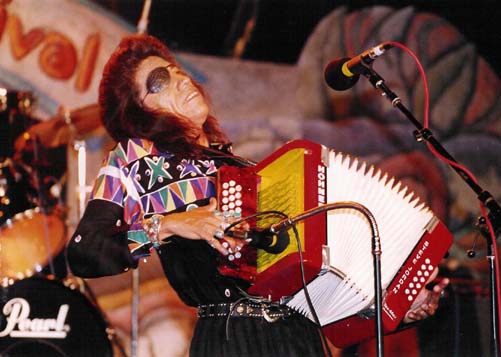 Texas accordion artist Esteban ‘Steve’ Jordan has built a reputation as a reclusive, eclectic artist. Many of those who know his work say he is truly a musical genius. But unlike other Tejano accordion players like Flaco Jiménez, Jordan resisted musical collaborations and built a reputation for keeping to himself. In fact, he often refused to give media interviews.

In 2008, Jordan was diagnosed with liver cancer and cirrhosis. While he has battled those illnesses, he has largely maintained a regular schedule, playing at Saluté International Bar in San Antonio, Texas every Friday. This past February, Jordan released his first CD in nearly two decades.

Latino USA’s Alex Avila visited with Jordan and his sons.

To hear an hour-long audio documentary on the life and music of Esteban ‘Steve’ Jordan, click on the slideshow below.