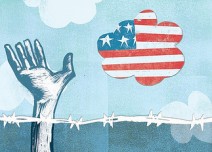 Beginning Wednesday, as many as 1.76 million young undocumented immigrants can apply for the reprieve President Obama announced in June, a program the government calls “deferred action for childhood arrivals.” Those who qualify will be considered on a case-by-case basis and, if approved, will be able to apply to stay and work in this country legally for up to two years. The application will cost $465 and require several background checks along with extensive financial, medical, education, and other records.

Requests for deferred action will be processed if the applicant is an unauthorized immigrant under the age of 31; came to the United States before her 16th birthday; has continuously resided in the country for five years; is currently in school, has graduated from high school or received GED equivalency, or is an honorably discharged veteran; has not been convicted of a felony or a significant misdemeanor; and is determined not to be a threat to national security or public safety.

Additional details will be released on Wednesday. In the meantime, U.S. Citizenship and Immigration Services has provided a hotline and answers to frequently asked questions on its website.

Many young immigrants welcome the opportunity to come out of the shadows and work or go to college.

Claudia Jimenez, a 19 year old Venezuelan native who has been in the U.S. since she was eight years old, shared her enthusiasm with the New York Times. Since graduating from high school last year, she has not been able to work or attend college. “Now I have something,” she said. “I can actually do something with my life. Before it was like my life was on pause.”

But others are wary. Time magazine features Karla Zapata who, while ecstatic over the prospect of getting a work permit, expressed her fears.

After years of living in the shadows, Zapata and her friends aren’t convinced it’s a good idea to give their personal information to the government when there are no guarantees that President Obama’s new program for young immigrants will last and no promise they’ll be accepted into it in the first place. Some see that ambiguity as an invitation for possible deportation.

Groups have rallied to support young immigrants like Jimenez and Zapata who hope to begin the process of legalizing their status (the program is not an amnesty and does not provide a path to citizenship).

United We Dream, a network of youth-led organizations across the country, launched a national campaign with its partners last week, to offer assistance to as many of the hundreds of thousands of Dreamers eligible to take advantage of the program … The campaign, titled We Own the DREAM/¡Unete Al Sueño!, hopes to guarantee that there is a national and local infrastructure to support Dreamers who are eligible for this opportunity to remain in the United States to complete their education and contribute to the economy.

Young people who apply for deferred action will need all the help they can get to navigate what’s likely to be a cumbersome and confusing process. Since the president’s announcement, immigrant advocates have warned about unscrupulous attorneys, notarios(public notaries) and “immigration consultants” who are out to fleece desperate immigrants and their families.

At the end of the day the deferred action program is only a temporary reprieve. Only comprehensive immigration reform through legislation will once and for all address the issue of unauthorized immigration as well as other shortcomings of our immigration system.

As November fast approaches, it is crucial to know where the presidential candidates stand on all of this. We know that President Obama supports DREAMers. What about Governor Romney?

In reaction to the administration’s June announcement, he said “I think the action that the president took today makes it more difficult to reach that long-term solution because an executive order of course is just a short-term matter … It could be reversed by subsequent presidents.” He may have been referring to himself after infamously declaring during the Republican primaries that he thought the DREAM Act is a mistake and he would veto it.