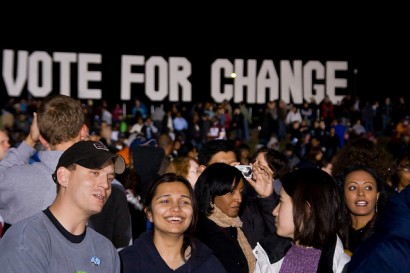 In 2008 Latino voters played a pivotal role in sending Barack Obama to the White House. But this year things could be different; the economy is still in recovery and the president has not kept his pledge to bring about significant immigration reform.

Pollster Sylvia Manzano says the margin of support for Obama will be similar to 2008: 70-72 percent of Latinos say they would vote for Obama versus 20-22 percent for Mitt Romney. The big difference will be turnout. The lack of immigration reform and record numbers of deportations of undocumented immigrants under President Obama has meant Latinos are less enthusiastic about his candidacy than they were four years ago. However, enthusiasm has increased this summer since the announcement of the deferred action program and the Supreme Court’s decision striking down major portions of Arizona’s immigration law known as SB 1070.

The number one issue for Latinos is the economy says Manzano, which sounds good for Romney, except she points out that Latinos are much more likely to support Democratic strategies, like raising taxes on the wealthy, government investment and increased spending. There’s not much support among Latinos for Republican prescriptions including tax cuts and cuts in social services.

Latino Decisions has identified five states where Latino voters could be the deciding factor in the presidential contest.  They are Arizona, Colorado, Florida, Nevada and Virginia.

According to Manzano, Texas, a state not on the list, represents the future of American politics. She focuses on two rising stars – Republican Ted Cruz who is running for the U.S. Senate in Texas and Julian Castro the young mayor of San Antonio who will give the keynote address at this year’s Democratic convention. This is about national demography says Manzano: more Latinos means more Latinos in both parties.

Manzano argues that the growing Latino electorate in Texas means we’re likely to see the emergence of a more moderate Republican party rather than a quick shift to electing Democrats. She says this is like New Mexico where Latinos tend to vote for moderate Democrats or liberal Republicans. She says Arizona, another state with a growing number of Hispanic voters, is more likely to follow California and turn blue over time.

For more analysis from Sylvia Manzano, make sure to check out the Latino Decisions Blog.

Fi2W is supported by the New York Community Trust and the John S. and James L. Knight Foundation with additional support from the Ralph E. Odgen Foundation and the Sirus Fund. Image courtesy of Flickr.