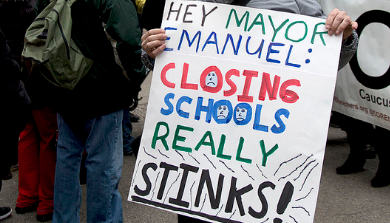 Despite strong protests, the city of Chicago announced it would close 50 neighborhood public schools at the end of this school year. Students from the Medill School of Journalism at Northwestern University reported on several of the schools listed for closure. One was home to an innovative program for children with special needs, the other ran health care and food programs for the neighborhood at large. Bryan Lowry, Jennifer Kirby report. Carrie Eidson contributed to this report.

Bryan Lowry is a graduate student in journalism at Northwestern University’s Medill School, specializing in public affairs reporting. He previously served as an English teacher in the San Francisco Unified School District for three years. The experience of working with children from San Francisco’s often overlooked low-income communities inspired him to embark on a career as journalist to tell the type of stories that sometimes fall through the cracks. He is a native of Pennsylvania and a graduate of Boston University.

Jen Kirby is a graduate student at the Medill School of Journalism at Northwestern University, where she focuses on magazine writing and urban reporting. She previously worked in the non-profit sector and received her bachelor’s degree in international politics from Georgetown University in Washington, DC.

Carrie Eidson is a graduate student at the Medill School of Journalism at Northwestern University, where she focuses on urban affairs reporting. She is a native of Asheville, North Carolina.