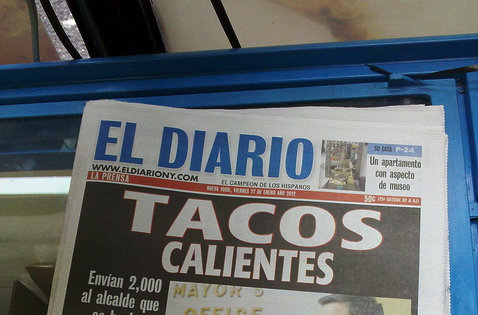 Spanish language media has been around since the 19th Century but still struggles for respect from the rest of the media world. Maria Hinojosa speaks with Rossanna Rosado, publisher of New York’s El Diario La Prensa. The celebrated newspaper celebrates its centenary this year.


And listen to Rosanna talk more about her experiences as a groundbreaking Latina journalist, and the history of Spanish-language media in the US, in the extended interview below:

Rossana Rosado has been a dominant force in New York media for 27 years. Using her Journalism degree from Pace University, she started as a City Hall reporter at El Diario La Prensa. She left the newspaper to join WPIX, Inc. as a Producer of Public A‑ airs programming. After rejoining El Diario La Prensa in 1995, she held the esteemed position of Editor in Chief, being the first woman to hold that position at the now 95 year old paper.