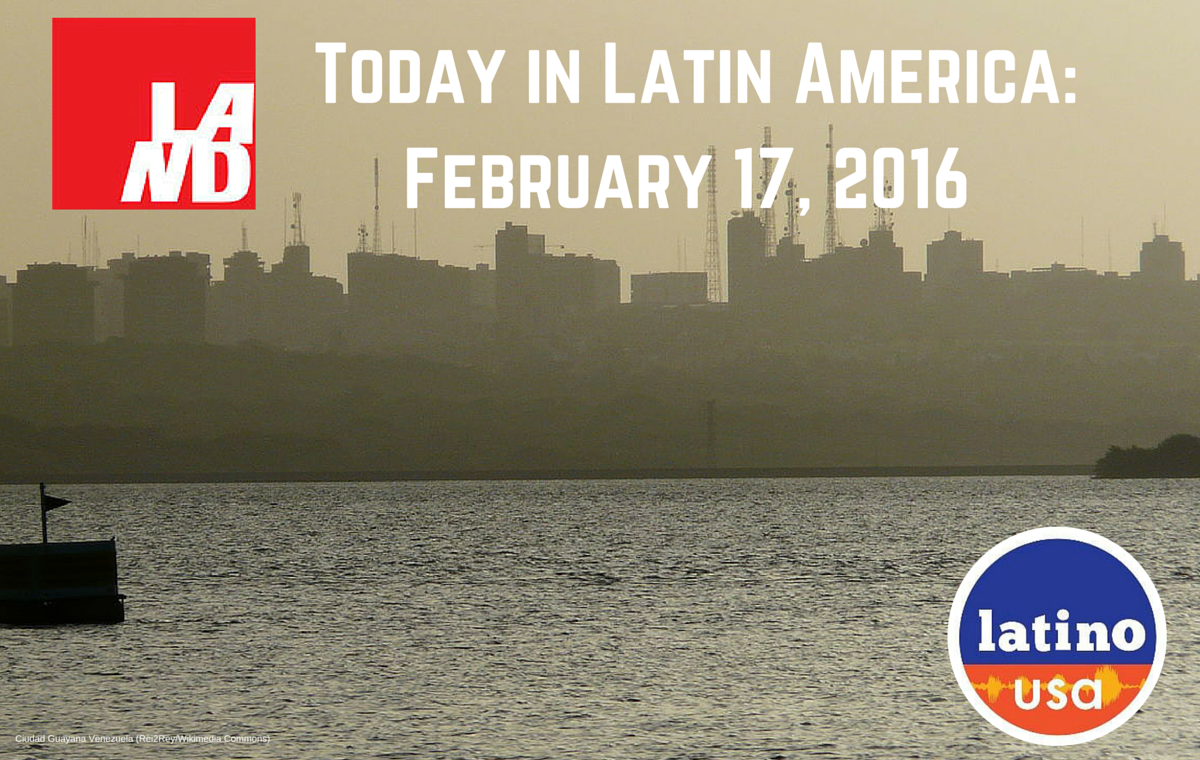 Top Story — Venezuela’s Oil Minister Eulogio Del Pino is meeting with his Iraqi and Iranian counterparts today in an effort to persuade the two countries to freeze their output of crude oil, as part of what could become the first global oil deal in 15 years. Iran, however, has already signaled that it does not intend to comply, with the country’s OPEC envoy calling a potential pact “illogical.”

An agreement to freeze oil production by the Organization of Petroleum Exporting Countries, of which Venezuela is a member, would be crucial for its economy. The worldwide glut in oil prices that began in 2014 has hit Venezuela particularly hard, as oil makes up about 95 percent of the country’s exports and 65 percent of government spending.

Venezuela, Russia, Saudi Arabia and Qatar on Tuesday agreed to freeze production, after Venezuela unsuccessfully sought a cut in production among OPEC members. Tuesday’s agreement, however, is conditional on countries like Iraq and Iran also joining the pact.

Venezuela faces an uphill battle convincing its Iranian counterparts to freeze production, as the Middle Eastern country recently began exporting oil after sanctions were lifted due to a nuclear deal. On Wednesday, the Iranian newspaper Shargh quoted Mehdi Asali, the country’s OPEC envoy, as saying that Iran plans to ramp up production until pre-sanctions levels are attained.

Venezuela has experienced widespread shortages during what The Wall Street Journal calls its “worst economic slump since independence from Spain.” On Tuesday, less than one week after declaring a state of economic emergency, President Nicolás Maduro replaced the hardline leftist economist Luis Salas with the more business-friendly Miguel Pérez.

As a new agreement to restore commercial flights between the United States and Cuba goes into effect, the New York Times reports on a family of Cuban-Americans who insist they be compensated for airport property seized during the revolution.

Pope Francis urged young people in Mexico to avoid violence and drug trafficking during a sermon in Michoacán, one of the country’s most violent states and where then-President Felipe Calderón launched a controversial military campaign against traffickers in 2006. “Jesus, who gives us hope, would never ask you to be hit men,” Francis said.

Early on Tuesday, gas explosions leveled homes and injured at least 40 people in a densely-packed area of Santo Domingo.

The Puerto Rican House of Representatives on Monday approved a deal to restructure $9 billion in debt at the power utility, a move seen as a potential model for addressing a total of $70 billion in problem debt.

The Caribbean saw 29 million tourist visitors in 2015, an increase of 7 percent, and earned $30 billion in revenue from tourism, although authorities are cautious that fears over the Zika virus could dent any further growth this year.

The U.S. Treasury Department has placed the latest round of sanctions on the Salvadoran gang MS-13, targeting two alleged leaders of the criminal group.

General Rodolfo Palomino, the head of Colombia’s police force, is under investigation for alleged involvement in running a male prostitution ring, ordering illegal wiretaps and other illicit practices.

Ecuadorian authorities will investigate executives from the national soccer federation on money laundering charges, the latest development in an overlapping series of probes into corruption among soccer authorities.

Peru’s electoral board will soon rule on whether Julio Gúzman, the main presidential candidate opposing front-runner Keiko Fujimori, will be able to run in the national elections in April.

Due to widespread food shortages resulting from the economic crisis in Venezuela, the government has begun to encourage the use of urban gardens, echoing the drastic measures taken during leftist ally Cuba’s own “special period” of crisis in the 1990s.

Argentine negotiators have reportedly made further progress toward resolving the country’s outstanding foreign debt by reaching a deal with lawyers representing some of the foreign bondholders affected by the 2002 default.

The rapid spread of the Zika virus in Brazil is generating suspicion and conspiracy theories about the origin of the virus, including the rumor that the virus is the creation of a British biotech company.

Epidemiologists and other experts from the U.S. Centers for Disease Control and Prevention are now working alongside Brazilian researchers in the northeastern state of Paraíba, to investigate the suggested link between Zika and the birth defect microcephaly.

On Tuesday, Chilean authorities issued a warrant to search the Queen Mary II, the cruise ship from which a Chilean chef jumped to his death in August.