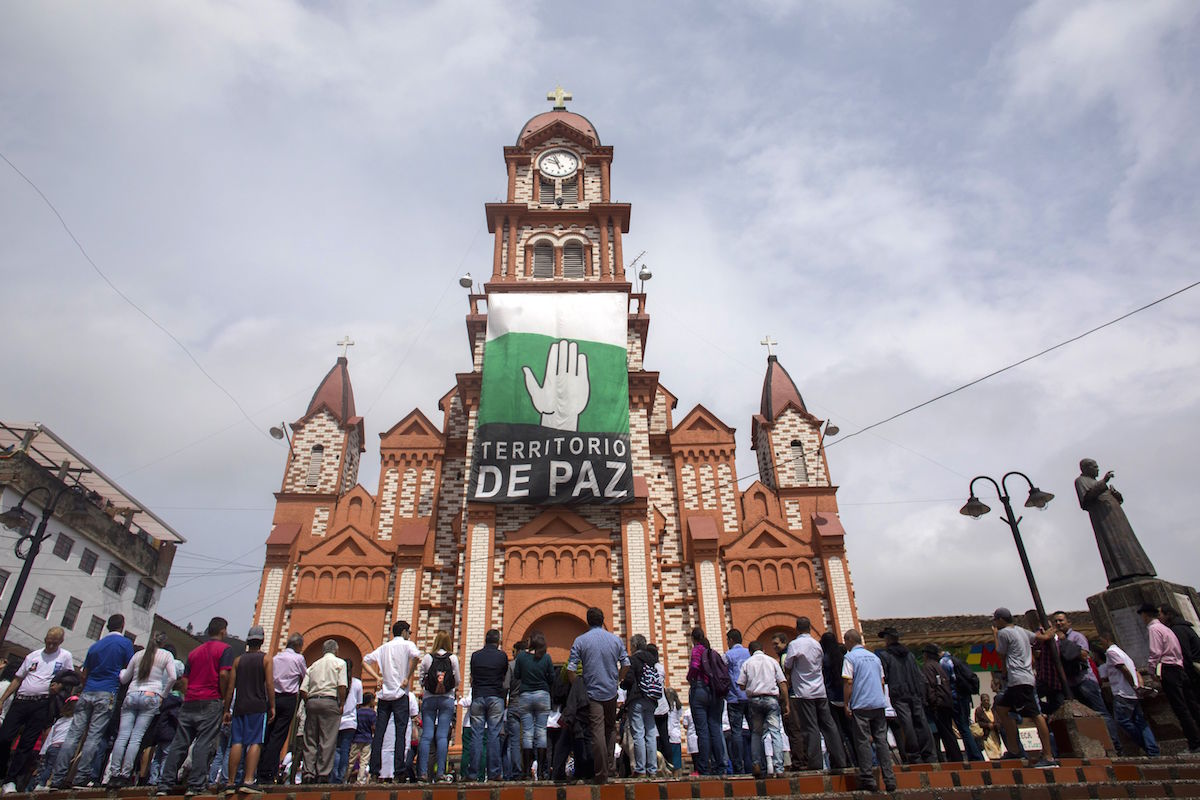 Victimss of the Colombian conflict take part at a reconciliation act with former FARC guerrillas on September 23, 2017. (JOAQUIN SARMIENTO/AFP/Getty Images)

One year after Colombians initially rejected a peace agreement with the FARC guerrilla group, today the outlook for peace seems almost promising. On October 10, the country’s constitutional court shielded that accord from any changes for a period of 12 years, removing fears that future governments could water down or undo the controversial deal.

With this much-anticipated decision, nine judges made it possible for the country to institutionalize peace after 50 years of internal conflict.

But for all the speculation among scholars about the FARC’s transition from armed rebellion to political party –my own included— the end of the conflict remains uncertain. Colombia’s violence was never just about the FARC, and peace won’t be, either.

Not Just the FARC

On the one hand, there are positive signs of calm in the country. On Oct. 1, a ceasefire went into effect with the National Liberation Army (ELN), the FARC’s lesser-known rebel sibling.

Established in Colombia in 1964, the same year as the FARC, the ELN aimed to promote a Cuban model of armed revolution in Colombia. This set them apart from the FARC, with its Marxist-Leninist approach to social change. So did the ELN’s less militaristic approach to violence. The group didn’t shy away from ambushing Colombia’s armed forces, but its preferred methods were sabotage – bombing oil pipelines, laying landmine fields—and extortion.

The ELN still has 1,500 to 2,000 troops stationed across the country, in territory that intersects with areas once occupied by the FARC. Thus, any narrative of the Colombian conflict that touts the FARC’s centrality risks missing the key role that the ELN must play in building a lasting peace.

As such, the ELN ceasefire is an important step in its peace process, which started in February 2017. On Oct. 5, the U.N. announced a mission to verify its implementation.

This opens the door to broader deescalation of violence in Colombia, which remains high since the peace agreement. At least 200 human rights activists have been killed over the past two years, and drug cartels, organized crime groups and paramilitary organizations continue to operate in the country. This dangerous dynamic does not miraculously disappear along with the FARC, or the ELN for that matter.

Recidivism is another threat: In past peace efforts in Colombia, demobilized fighters from one rebel group simply rejoined other armed organizations. This fueled the war, giving it a continuity that went beyond particular organizations to become a kind of generalized social phenomenon.

Despite recent advances, implementing the FARC agreement is still a significant challenge: The accords are ambitious, and they must be carried out in a country whose populace voted against the peace agreement by a thin margin just one year ago.

There were numerous conspiracy theories floated during the peace talks, including allegations that the negotiations’ inclusion of gender and LGBTQ issues would promote a “homosexual agenda” in Colombia.

Targeted during the conflict between Colombia and the #FARC, the community should receive compensations for their suffering ➡️ https://t.co/cXsmrwYwXO pic.twitter.com/UQ9Aik595I

But the deal’s opponents raised valid claims, too. Some wondered whether conflict victims would actually see justice served, while others expressed concerns about former rebels joining the political process.

In the end, many Colombians were profoundly uncertain about how the principles of the FARC agreement would be interpreted and implemented. Just over 50 percent of them rejected the peace agreement, which ultimately had to be approved via a fast-tracked passage through Congress.

As the 2018 presidential election season heats up, some candidates and parties have found that attacking the accords is now a good way to mobilize votes.

This, in my assessment, is a dangerous electoral strategy. FARC fighters could interpret such political bluster as the state reneging on its commitments, which could in turn produce a spike in recidivism: Why should guerrillas hold up their end of the deal if the government won’t?

Indeed, there are already reports that demobilized fighters are being recruited by other armed groups. This has real potential to foil the peace process.

The court’s decision has now shielded the agreement from populist proposals of renegotiating a “better deal.” But there are other reasons why the Colombian government could fail to keep its commitments to the FARC – namely the ongoing challenges of implementation.

From delays in disarming rebels and underfunded mental health care for ex-combatants to setbacks in passing the laws necessary to activate components of the peace deal, the process has been fraught.

Colombia, a middle-income South American nation, may simply lack the institutional capacity necessary to fulfill its own landmark agreement. After all, a weak state unable to deliver on promises made to its citizens is one reason that warlords and armed actors got so powerful there in the first place.

There have been remarkable achievements, of course. In June, the FARC surrendered its weapons to the U.N., and its guerrillas are now concentrated in reintegration camps. The government has even managed to keep demobilized fighters safe throughout this process.

But the next big hurdle is just around the corner: the phases of transitional justice and historical reckoning. Colombia’s Congress is now debating legislation detailing how FARC fighters will be punished, or not, for their transgressions.

Lawmakers must also set up the Colombian Truth Commission, which will allow Colombians to understand, for the first time, the full extent of the atrocities committed in their country.

At present, this legislation is being filibustered by some right-wing politicians, who want Colombia’s transitional justice to be more punitive. Meanwhile, members of the Cambio Radical Party stand accused of seeking bribes from President Juan Manuel Santos’ administration in exchange for their votes. As the May 2018 election nears, such political tensions are likely to rise.

Peace-building often looks like this. It’s messy and long and nonlinear, a national process that takes political leadership, sacrifice and no small dose of patience.