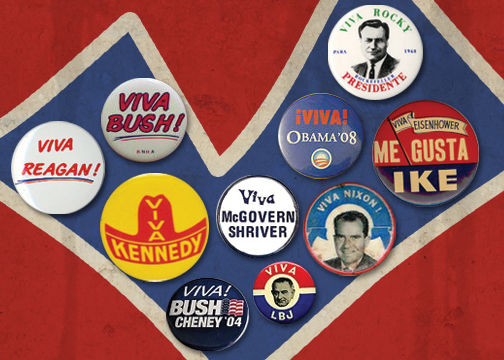 Listeners of a Spanish-language radio station in Phoenix heard ads in early May asking them to text their political opinion… and maybe win concert tickets. Is this data mining or a clever new strategy? Fernanda Echavarri walks us through the ads and Matt Barreto analyzes it, looking for the “Viva Factor.”

Since the 1952 presidential campaign, when candidate Dwight D. Eisenhower used the slogan “Viva Eisenhower” in an initiative to attract Mexican-American voters, whenever political candidates have wanted to signal to Latinos, they place the word “Viva” in front of their names. Our new series looks for the “Viva Factor,” the ways in which candidates and both parties aim to draw in the Latino vote.

This week’s segment rates an ad giving it a “comemierrr… coles” rating to test pandering to Latinos. The expression “comemiércoles” substitutes the naughty half of a Cuban expression for “B.S.” with the Spanish word for “Wednesday.” Consider it your Spanish lesson for the day.

Fernanda Echávarri is a reporter for Arizona Public Media in Tucson, Arizona. Echávarri, a graduate of the University of Arizona School of Journalism, contributes stories to radio and online. She started her career in print journalism as a reporter for the Tucson Citizen. She then went on to work for the Arizona Daily Star, where she focused on public safety and investigative reporting. Echávarri received a Freedom of Information Award from the Arizona Newspaper Association in 2011 for her work in a series published in the Arizona Daily Star.

Matt A. Barreto is an Associate Professor in political science at the University of Washington, Seattle and the director of the Washington Institute for the Study of Ethnicity and Race (WISER). He is also the director of the annual Washington Poll. He received his Ph.D. in political science from the University of California, Irvine in 2005. His research examines the political participation of racial and ethnic minorities in the United States and his work has been published in the American Political Science Review, Political Research Quarterly, Social Science Quarterly, Public Opinion Quarterly, and other peer reviewed journals.

2 thoughts on “The Viva Factor: Arizona and Maná”