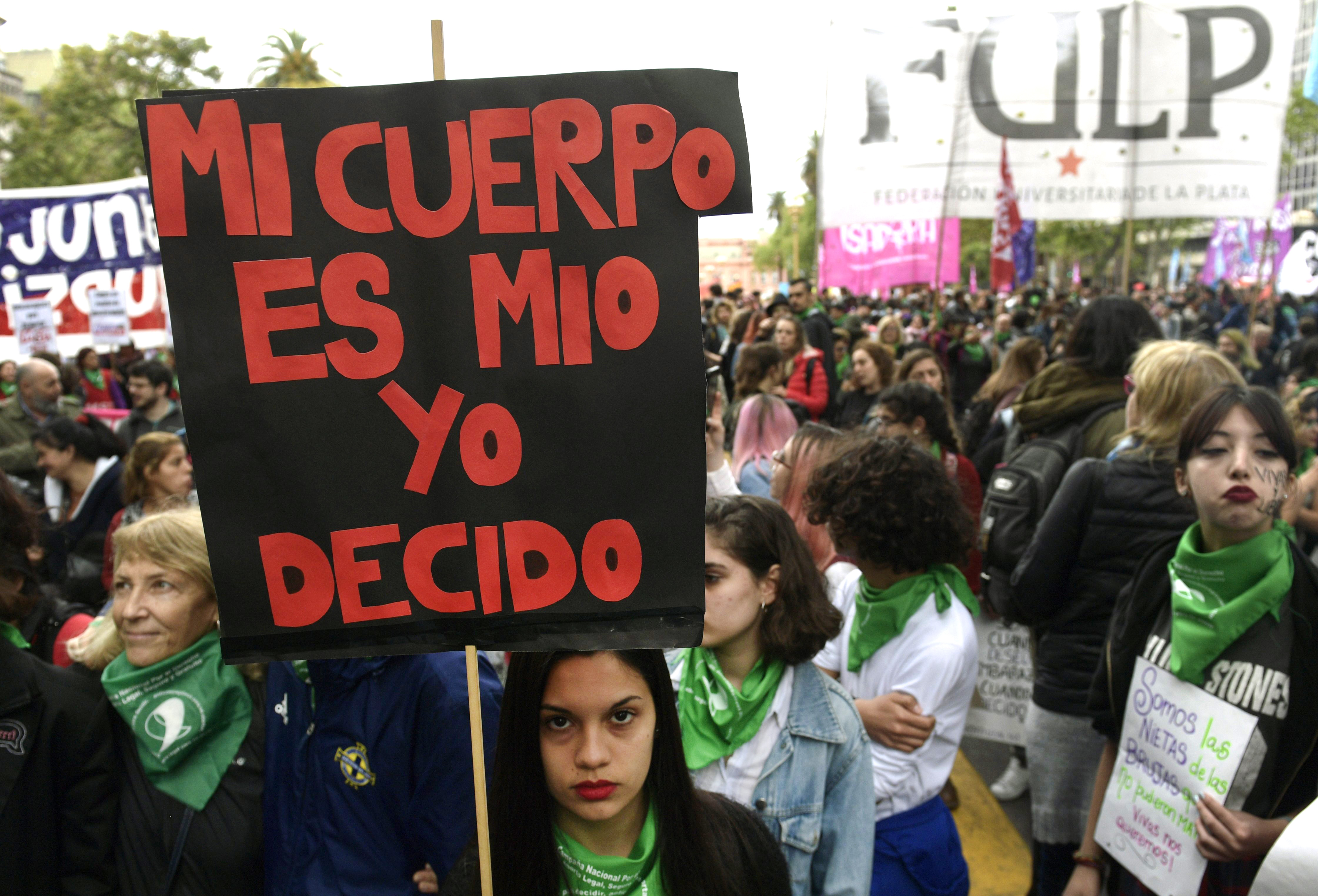 A woman holds a placard reading in Spanish "My body is mine , I decide," during a protest demanding the decriminalization of abortion in Buenos Aires on September 29, 2017. (JUAN MABROMATA/AFP/Getty Images)

As an Argentinean scholar of gender in politics, I’m normally called to provide commentary on some fairly depressing statistics.

In recent months, however, something unexpected happened.

Since 1921 Argentina, a historically Catholic country, has allowed abortions only if the mother’s health is at risk or if she was raped.

But under President Mauricio Macri, who has governed from the center-right, Congress has begun an unprecedented debate on a bill that would allow women to terminate their pregnancies within the first 14 weeks. Abortion services would be provided free within Argentina’s universal basic health system.

The abortion debate has given rise to legislative discussions about long-ignored problems like the gender pay gap and parental leave. And late last year, Congress surprised Argentineans by passing a law requiring that 50 percent of all candidates nominated by political parties to run for office be women.

Is Argentina on the verge of a huge leap forward in gender equality?

Not First Place, Not Last

Compared to the rest of the world, Argentina’s brand of sexism is only moderately bad. The country comes in 34th of 144 countries ranked on the World Economic Forum’s gender equality index—better than 45th-ranked United States and 35th-ranked Canada.

But just having a woman in high office does not guarantee that a country will take political action to help women overcome gender barriers. Fernández de Kirchner oversaw no effort to improve the reproductive and sexual health of Argentinean women, for example.

Women in Argentina face serious inequalities. Data from the National Statistics and Census Institute showing that men earn 23.5 percent more than women in the same jobs could be expressed like this: Argentinean women work for free 86 days of the year compared to their male colleagues.

Government data also show that Argentinean men who participate in household chores and care-taking do so 24 hours a week on average. Women spend 45 hours a week taking care of their homes and their family members, which adds up to 100 days of unpaid labor a year.

Argentinean women share the problem of excess household labor with women in Australia, the United States, Norway—pretty much everywhere.

Decades of evidence demonstrate the negative consequences that this burden causes for women. It makes some job opportunities unattainable and reduces their earnings when they have to work less to care for loved ones. Across the globe, raises and promotions tend to come more slowly for women.

This discrepancy is particularly strong in fields with hierarchical systems based on rigid promotion requirements like academia. The University of Oxford named its first female chancellor in 2015 – a mere 800 years into its existence.

In Argentina, women constitute the majority of the teaching staff at the country’s 55 public universities. But 89 percent of Argentinean university presidents are men.

On March 8, some 200,000 Argentinean women marched nationwide for International Women’s Day. Many of them called for the legalization of abortion, asserting that it would advance women’s health and human rights. The illegality of abortion poses numerous risks to women in Argentina and across Latin America, where abortion is highly restricted or banned in all but a handful of nations.

Under current law, almost all abortions are a crime in Argentina. Both the woman and the doctor who performs the procedure can be punished with up to 15 years in jail. In 2014, a 27-year-old woman was charged with aggravated homicide and sentenced to eight years for allegedly inducing an abortion.

Argentina also has a high maternal death rate, due in part to the 500,000 clandestine abortions estimated to be performed here each year. Illegal medical procedures are risky because they lack government quality control.

I also believe that access to reproductive health service is a question of economic justice. Every 10 minutes, a teenage girl in Argentina becomes a mother. In most cases, government data show, she is from a poor family without the financial resources to support raising a child, continuing a vicious cycle of intergenerational poverty.

The sudden addition of gender to the political agenda should have an important impact on the October 2019 general election, when Argentina will elect its president and legislators.

Men still dominate the top ranks of all the country’s main political parties. The inequality has persisted despite a 1991 “gender quota” requiring parties in Argentina to nominate women to run at least in 30 percent of all legislative races.

That law succeeded in getting more women into Congress, but not into leadership positions within their own parties.

In 2019, parties must nominate the same number of men and women. In my assessment, that will oblige male politicians to negotiate with women and share decision-making with them from a more equal position. If women aren’t fairly represented on a given party’s candidate list, that party can’t run anyone in the election.

The sudden surge of gender equality-related legislative debate will all but ensure that women’s rights become an issue on the 2019 campaign trail. Social problems like maternal mortality, the gender pay gap and sexism in the workplace have long been ignored during electoral cycles.

Now, political parties will be compelled to declare their stance on these issues. Candidates will have to propose policy solutions and explain their ideas to citizens.

This will make for some heated and passionate confrontations, but that’s a good problem. Because when a subject enters the political debate, it sends a powerful message to society that it’s worth discussing—and needs resolving.