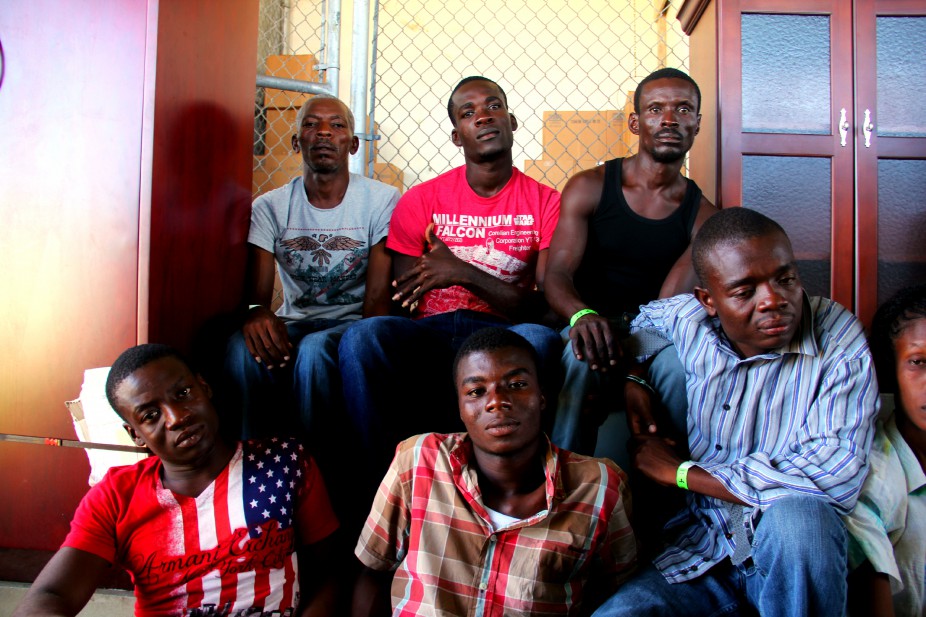 There’s no fence to divide it. There are no bridges to cross or checkpoints to be checked at. There’s no desert to lose oneself in.

The other border is a 60 mile stretch of ocean between the island of Hispaniola – shared by the Dominican Republic and Haiti – and the US commonwealth of Puerto Rico, known as the Mona Passage.

The Mona Passage is the main route for unauthorized immigration to Puerto Rico, mostly from the Dominican Republic. The migrants are brought over by smugglers in small wooden boats called yolas. Each boat can be packed with 100 people or more.

“THE MONA IS TREACHEROUS”

“The Mona is treacherous,” says US Coast Guard Captain Drew Pearson, the man in charge of patrolling the Mona. “It can be nearly calm one minute, and then have 8-10 foot seas the next minute. And that can lead to a boat capsizing or people being ejected into the water.”

For migrants, the chance to dramatically better their lives makes the journey worth the high risk. Puerto Rico is poorer than Mississippi, the poorest state, but it’s still almost five times wealthier than the Dominican Republic.

Before immigrating to Puerto Rico 10 years ago, domestic worker Altagracia Pablo had been living in deep poverty in a rural region of the Dominican Republic. “We didn’t even have a house – it collapsed in a storm, and we were sleeping wherever people would let us,” she says.

She made the difficult decision to leave her two daughters and look for a better life in Puerto Rico. She borrowed $1500 to pay the smugglers. They told her to pack a single change of clothes and brought her to Miches, a town on the eastern edge of the island.

The journey took 28 hours. She remembers vomiting over and over again. And there were other problems.

“Water leaked into the gas supply, there were problems with the motor. There were fights between passengers with knives and bottles,” she says. “But in the end, thank god, we made it safely.”

KNOCKING ON THE DOOR

Altagracia arrived undetected by the authorities, but had she been caught, she might have ended up at the Border Patrol station in Aguadilla, a few hours west of San Juan, where migrants who are apprehended are taken to get processed.

“The best analogy is a door,” says Jeffery Quiñones, a communications officer for US Customs and Border Protection.  “You have to knock on the door and say what your purpose is. If you come to a place that’s not the door, it makes it a crime punishable with immigration law.”

While I’m at the station, a new group of migrants is brought in, just picked up from the sea.

One of them, a Dominican man in handcuffs I’ll call Pedro, had lived undocumented in Puerto Rico for 11 years, working as a welder. One day while he was playing dominoes outside, he was picked up by immigration agents and sent back to the DR.

Since being deported, he’s tried to return to Puerto Rico five times. Each time the boat turned back due to ad weather. Finally, this time he made it across, but his vessel was caught by the Coast Guard. As a repeat migrant, he’ll be prosecuted, and could serve jail time.

“TWO SIDES OF THE SAME COIN”

Pedro shrugged off his misfortune. “You take a risk knowing you will either win or lose. Either way – amen. They’re two sides of the same coin,” he says.

Most of the other migrants at the station aren’t Dominican, however, they’re Haitian. They look scared and exhausted as they wolf down plates of rice and beans.

Their presence reflects the changes in immigration patterns to Puerto Rico. Recently, fewer Dominicans are arriving as the Dominican economy improves. At the same time, there’s been an explosion in Haitian migrants. In 2006, only two Haitians were apprehended by Border Patrol. Last year, the number was 600.

The reason so many Haitians are crossing the Mona is what amounts to a de-facto “wet foot, dry foot” policy. When Haitian migrants reach American soil, including the tiny outlying islands that are part of Puerto Rico, US immigration authorities allow them to begin asylum proceedings based on the requirement of “credible fear” of persecution in Haiti.

Those asylum proceedings can take years to resolve, and having an open case allows you to stay and, in many cases, work in the US in the meantime. But if the migrants are caught at sea, even within American waters, they are turned back to Haiti.

As word spreads in Haiti that migrants arriving in Puerto Rico are being allowed to stay, more and more are showing up. The possibility of asylum has created a cruel reality: you’re allowed to live in the United States, if you can make it here alive.

The Haitians who do make it find help from Father Olin Pierre, a Haitian priest in San Juan.

“It’s a main role of a priest to help the weak,” says Father Olin. “And, they’re my people.”

Puerto Rico has no system in place for dealing with Haitian arrivals, so Father Olin has taken up the slack and turned his church into a makeshift refugee camp. Now, whenever a new Haitian boat comes in, authorities take the migrants straight here.

Cots are laid out all along the floor of the rectory. Women cook a meal of seafood as the guys watch a DVD on a portable player. One of them is 27-year-old William Joseph, who witnessed tragedy in the crossing.

“The trip was not easy,” says Joseph. The waters were rough as they were approaching land, and the Dominican smuggler forced his passengers out of the boat so he could head back quickly. They would have to swim the rest of the way. “But some of us didn’t know how to swim. I tried to save some of them too but… in the end we have five people missing.”

“They had already arrived,” says Father Olin, shaking his head. “They had a bright future ahead of them.” He trails off.

Five of Joseph’s companions drowned. Nobody knows how many migrant bodies lie at the bottom of the Mona Passage. Estimates vary – from single digits to the thousands.

“It’s like playing the lottery,” says Father Olin. For the winners who make it to Puerto Rico, and on to Olin’s church, life in the continental US is so close they can touch it. Olin raises money from his congregation to buy them tickets to Miami or New York, where family members are waiting for them. Almost no one stays in Puerto Rico.

Meanwhile, Dominican immigrants, who are generally not granted the “credible fear” status needed to start asylum proceedings, can’t just zip of to the US. Many do try, however. Flights to the mainland are considered domestic, so Dominican migrants just need a fake ID to get on a plane. But, it’s risky. Most choose to remain and work in Puerto Rico, even if they are undocumented. Journalist Carmelo Ruiz says the island completely relies on the Dominican community to function.

“It’s the same dynamic with immigrants in the United States,” says Ruiz. “They do a lot of the worst work and if they left all of a sudden – who’s going to fix my car? Who’s going to mow my lawn? Who’s going to work in construction? I don’t know what would happen but it probably wouldn’t be good.”

ONCE YOU’VE MADE IT

However, immigration in Puerto Rico doesn’t seem to stir up as much controversy as it does on the mainland.

“Illegal immigration is not necessarily an issue of public concern,” says Jeffery Quiñones, from US Customs and Border Patrol. “There’s no sense that there’s a conflict about their presence in the country.”

Kelvis Polo, the owner of a discount clothing shop in San Juan agrees – the presence of the Dominican just isn’t a big deal.

“Everywhere, you’ll find a few people who are racist,” he says. “But you don’t really see much of that here. You see it more in the States.”

“PUERTO RICO, I LOVE YOU”

Still, others I spoke to paint a more nuanced picture – Dominicans are the butts of a lot of jokes, and you might hear Puerto Ricans complaining about Dominican moving into the neighborhood. And, with no legal recourse to turn to, labor abuses are common.

“They treat you differently,” says domestic worker Altagracia Pablo. “You can’t complain about anything.

She says employers sometimes try to take advantage of her and make her do more work than she’s paid for. That kind of unfair treatment can make her pine for home. But overall, she says, life in Puerto Rico has been good to her.

“My dream isn’t to go back to the Dominican Republic. It’s to pledge allegiance to this flag, to the United States,” she says. “Truthfully, Puerto Rico, I love you.”

A previous version of this article stated that Haitian migrants are allowed to stay in Puerto Rico because of a TPS (Temporary Protected Status) for Haiti, as our reporter was originally told by US Customs and Border Protection officials in Puerto Rico. Haitians who have resided in the US continuously since 2011 are still permitted to stay in the US under TPS through 2016, but new arrivals are not granted TPS.

However, Haitians arriving in Puerto Rico by boat are currently being allowed to stay with a “notice to appear” before an immigration court on the US mainland and request asylum status. This occurs if the migrant claims “credible fear” of returning to their country of origin.

The de facto situation on the ground in Puerto Rico is that Haitian migrants are being allowed to stay, while Dominican migrants caught on land or sea are removed to the Dominican Republic.

5 thoughts on “The Other Border: Puerto Rico’s Seas”