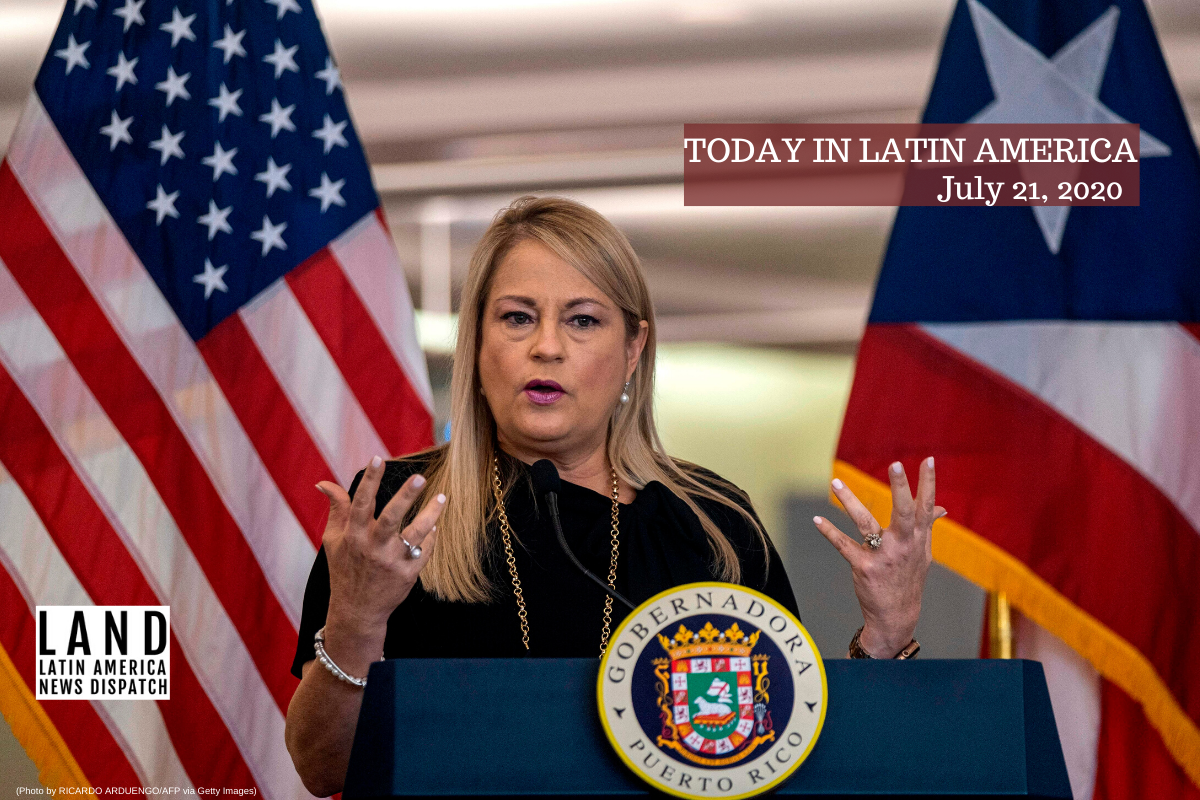 PUERTO RICO: Governor Wanda Vázquez Garced is officially under investigation for allegedly mismanaging relief supplies for victims of the December and January earthquakes. The Independent Special Prosecutor’s Panel assigned a special prosecutor to the case yesterday. Four other government officials —including Secretary of the Interior Antonio Pabón Batlle and Senator Evelyn Vázquez Nieves— will also be investigated.

Former Secretary of Justice Dennise Longo Quiñones was asked to resign earlier this month for referring the case to the special panel. Her department had launched its own investigation into the Vázquez government’s failure to distribute disaster aid. A cellphone video showed a warehouse full of unused aid in Ponce weeks after the first earthquake struck.

The special panel has 90 days to complete its investigation. Vázquez is the first sitting governor of Puerto Rico to be investigated by the panel in recent history.

BRAZIL-PARAGUAY: A Brazilian court approved a request to exhume the body of former Paraguayan dictator Alfredo Stroessner to perform a DNA test and settle a claim by a Paraguayan who says he is Stroessner’s son. Enrique Alfredo Fleitas says his mother is Michele Fleitas, who had a relationship with Stroessner in the 1970s until his death in 2006. As Stroessner’s son, Fleitas claims he should have access to a $20 million inheritance. Stroessner was married to Eligia Mora, with whom he had three children, but he was also known to have many lovers throughout his life and has other children. Stroessner is buried in Brasília, where he lived in exile from 1989 until his death.

CHILE: President Sebastián Piñera announced a plan Sunday to slowly start reopening after weeks of lockdown due to the coronavirus pandemic. The plan, called “Step by Step,” will have five stages: quarantine, transition, preparation, initial opening and advanced opening. The stages will begin at different times in different regions of Chile. Piñera said Chile has seen improvement in management of the coronavirus pandemic in the last five weeks, but overall the country has struggled to contain the virus. Chile has among the highest number of cases in Latin America—with more than 330,000 confirmed cases and 8,503 deaths.

ECUADOR: The National Court of Justice ratified the eight-year prison sentence for former President Rafael Correa and denied Correa’s request for an appeal yesterday. Correa was sentenced in April following a conviction on corruption charges for accepting bribes. His sentence also bars him from participating in Ecuadorian politics for 25 years. In another blow to Correa, the National Electoral Council on Sunday suspended the Fuerza Compromiso Social party, which supported the former president. The party will not be allowed to participate in the 2021 presidential elections.

BAHAMAS: Starting tomorrow, travelers from the United States will not be allowed to visit the Bahamas. The islands experienced a spike in COVID-19 cases following their reopening for tourism. There have been 153 confirmed cases in the Bahamas so far, but 49 of those cases were confirmed after the islands reopened on July 1. Most of the islands’ tourists come from the United States. Tourists from other countries will still be allowed to visit. The pandemic has hit tourism economies in the Caribbean particularly hard, prompting some to reopen despite the risk. Bonaire and Curaçao have also banned visitors from the United States for now.

NICARAGUA: President Daniel Ortega re-emerged yesterday after 39 days without appearing in public. Ortega spoke at a celebration of the 41st anniversary of the Sandinista revolution. He said only 91 people have died from COVID-19 in Nicaragua since the start of the pandemic, but he and Vice President Rosario Murillo wore masks at the event. Ortega has been largely absent from public view since March. He has continuously downplayed the threat of the virus, and in his speech yesterday he criticized Nicaraguans for arriving at hospitals when they are already struggling to breathe.

PANAMA: A suspect has been arrested in the murders of seven people between the ages of 17 and 22 near Gatún Lake on Saturday. The deceased were part of a larger group visiting the lake when two men allegedly attacked them. Six people survived. Investigators believe the attack was not random because a survivor said one of the attackers said the name a victim before killing him. Autopsies revealed that all seven were shot in the head.

MEXICO: The Secretary of National Defense said yesterday that an “elite” group within the Jalisco New Generation Cartel is responsible for videos released by the cartel. On Friday, a video was released showing dozens of armed men wearing military uniforms and holding assault rifles and machine guns and standing next to armored trucks. The video was considered a show of force against President Andrés Manuel López Obrador, who last week visited Guanajuato and Jalisco, considered strongholds of the cartel. Yesterday, López Obrador responded to the video, saying, “we are not going to declare war.” However, the video’s veracity has been questioned, with Secretary of Security and Civil Protection Alfonso Durazo saying it is being investigated.

MEXICO: Homicides in the first half of 2020 have increased from the same time period last year, according to Security Minister Alfonso Durazo. The murders of women have grown exponentially. Overall, there have been 17,439 homicides in the first six months—a 1.7% increase from last year. The murders of women rose 9.2%. The increase coincided with the coronavirus pandemic as families spend more time confined to their homes. Other crimes, such as kidnappings and robberies, have decreased.