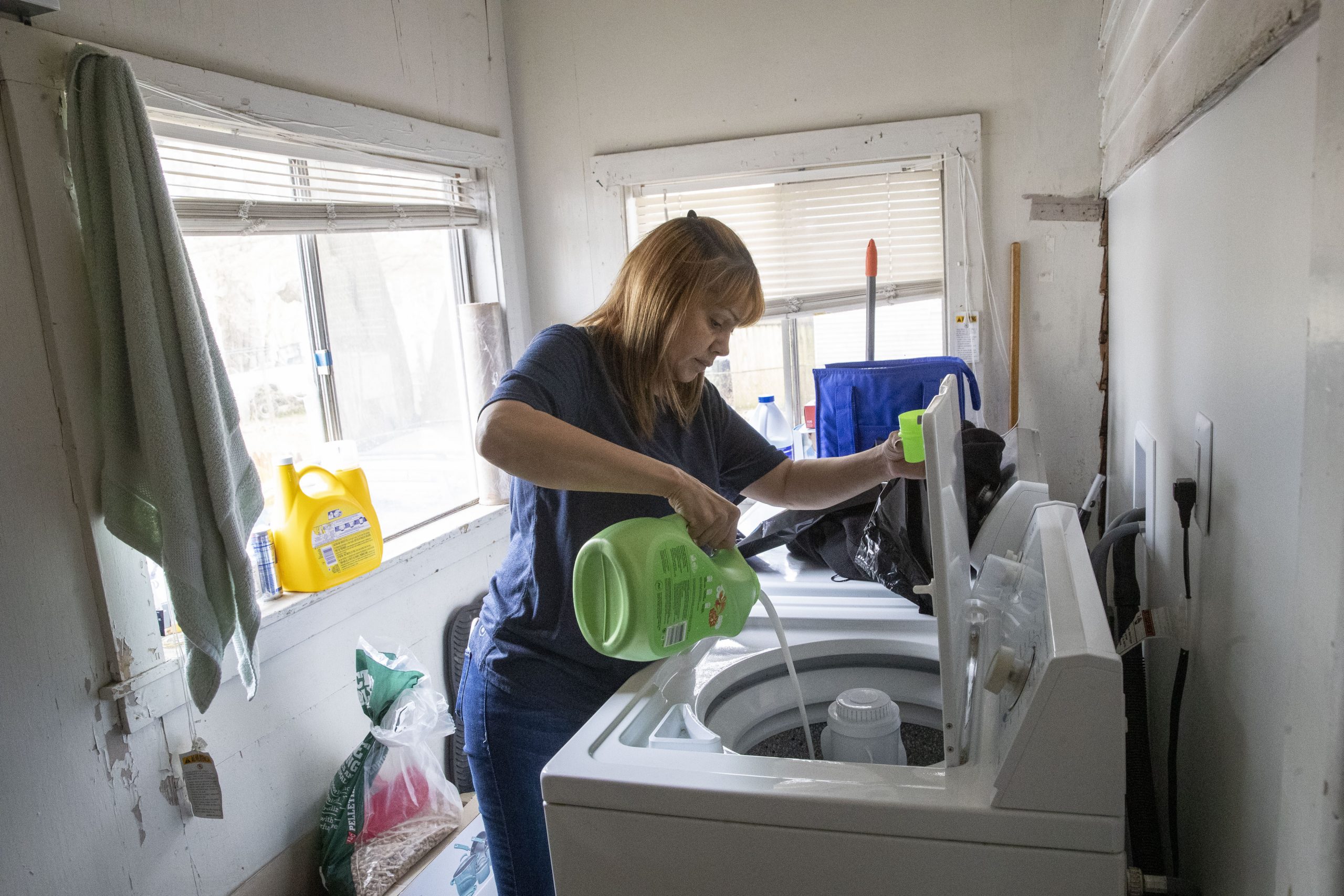 In this Monday, April 27, 2020 photo, Lissette Serrano sorts her laundry while doing her daily chores at home in Bridgeport, Connecticut, after being let go from her job as a cleaner at a rest stop on the Merritt Parkway in Orange, Connecticut. (AP Photo/Mary Altaffer)

Lissette Serrano asked for a mask while she did her job cleaning toilets and picking up trash at a busy rest stop on a Connecticut parkway. She was told there were none.

Soon after, Serrano came down with coronavirus symptoms and was told by a nurse to isolate for 14 days. When she told her boss she could not leave home, Serrano said, she was fired.

“She had said, ‘That’s just an excuse, you don’t want to go to work,” the 49-year-old Serrano, speaking through a translator, said in Spanish of her employer. “This is not an excuse.”

Serrano is one of about 3,000 cleaners in New York’s Hudson Valley and Connecticut’s Fairfield County who belong to the Service Employees International Union, make just over $16 an hour and in the past couple of months put themselves in harm’s way to disinfect offices, train stations and other public areas with little protective equipment, said Alberto Bernardez, a union district leader.

Many, like Serrano, lost their jobs when buildings closed or when they were forced to stay home with COVID-19 symptoms, he said.

About 80% of the cleaners are immigrants, mostly Hispanic. Many cannot access unemployment benefits, even though they pay taxes, because they are living in the country without legal permission.

“Right now people are having to choose between feeding themselves and their family or going to work sick and putting their lives in jeopardy and putting others at risk,” he said.

Serrano’s husband is still working at a box factory, but they need the money from her job to help pay the bills and take care of her 12-year-old daughter. She’s not sure what they will do now.

So is Janeth Baldeon, a 35-year-old janitorial worker who lives in White Plains, New York, with her father and her partner and their two children, a 6-year-old boy and 5-year-old girl.

The Peruvian immigrant and her father were both laid off from their jobs with a cleaning contractor.

They had been working at a biotech company, Acorda Therapeutics, in Ardsley, New York, when the offices shut down late last month.

Baldeon said she never felt unsafe on the job and believed she was doing something important to keep the virus from spreading.

“They made sure we had appropriate gloves and we knew how to utilize them,” she said. “Masks weren’t very common yet, but we felt that with the gloves we had some level of protection.”

Baldeon is not sure if or when she will get her job back. Her health insurance runs out in a month. She won’t be able to go back unless schools and day care centers reopen.

She said her co-workers and the immigrant community have banded together to help one another with necessities.

She hopes to get paid for accumulated vacation days and sick days, but her last check included just one day’s pay — the day she was laid off.

“At this moment, I haven’t really been at a loss for food,” she said. “I thank the Lord. I wake up. I just see what needs to be done that day. I’m at home with the children and I just get through the day, day by day.”

Isabel Herrera, 41, of Bridgeport, is still waiting for unemployment benefits after being laid off last month from the Hilton Garden Inn in Norwalk.

An immigrant from Honduras, she has a work permit and is the only breadwinner for her 18- and 10-year-old children.

Her landlord has offered to defer her rent payments until she gets back to work. The family is living on donated food and the meals Bridgeport schools are supplying the children, even though the schools remain closed.

“It has affected us just as much emotionally as economically, because it is difficult to get up, go to your kitchen and see that there is no food,” she said in Spanish through a translator.